The outbreak of the Coronavirus has had a major impact on the gaming industry. With this in mind, GGB is committed to providing updated news and analysis on our weekly news site, GGBNews.com.
Progressive Products 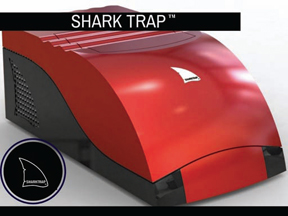 The company will showcase its patented Combination Single-Deck and Double-Deck, Novelty-Game and Poker Super Shufflers in the booth of Aces Up, its distributor (5243), on live games throughout the G2E show.

Following years of development, including the University of Nevada, Las Vegas School of Engineering’s co-creation of the first pre-prototype shuffling apparatus, the Super Shufflers’ unique features will fundamentally change the methods that operators employ to mix and distribute cards.

At only 550 cubic inches (the smallest shufflers ever developed), Shark Trap sufflers feature the world’s only true random number generators (TRNG)—versus pseudo-random number generators (PRNG)—offering unparalleled protection that eliminates all slugs, peeks, coolers, camera-based, paper, machine manipulation and other scams, while making it impossible to have “missing cards” remain in their machines at the conclusion of a shuffle.

Super Shufflers are simple, sleek, low-profile, versatile, easy to operate, ergonomically advanced and competitively priced, and feature fewer than half of the moving parts found in other commercial shufflers.

In addition, the company’s patented “No Flash” delivery method on novelty games completely eliminates all hole card plays and once again will allow operators to safely offer certain novelty games that have been all but eradicated by advantage players in several jurisdictions.

No final step is required to dispense cards from positions, shelves, slots or compartments into individual hands, and novelty games can be dealt immediately, while shuffling and dealing simultaneously.

Orders for delivery of the innovative Super Shufflers by early 2020 will commence at G2E.