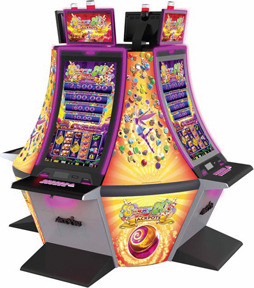 Aristocrat takes a page from the mobile video game craze with the candy theme of this new series of multi-progressive video slots, called the Sugar Hit Jackpots Series. Initially launching with three separate base-game titles, the series fits into what the manufacturer calls the “J*Series” of games offering progressive jackpots.

The initial titles—Reel Sweet Stacks, Rich Rich Chocolate Respins and Cool I Scooped It Again—are all available with colorful carousel artwork making them perfect to be banked together. The games are each available in two of Aristocrat’s popular new cabinets—the Arc Single (pictured), which features a 42-inch high-resolution LCD screen in a concave curved shape; and the Helix, featuring two floating 1080p-resolution LED display monitors, immersive rear-surface ambient lighting and a quad sound package.

The Sugar Fairy is a player’s muse through each of the three titles. Each title employs a 40-line base game on a five-by-four reel layout, and each includes a four-level progressive jackpot with a trigger based on Aristocrat’s popular stacking mechanic, along with frequent mini features. Plus, all mini features and free games improve the chance of winning jackpots. Adding to the fantasy are player-selectable 3D reels and oversized scatter symbols.

Reel Sweet Stacks includes a Wild Reel feature that awards players more stacks and a greater chance of winning the jackpots. Rich Rich Chocolate Respins has a re-spin feature that provides more chances to win a jackpot. Cool I Scooped It Again gives players a chance to win up to five of the same jackpots in a single spin.

The four progressives apply to all games, with resets of $2,500 for the Grand, $300 for the Major, $60 for the Minor and $10 for the Mini. Each jackpot is identified with a reel symbol, and is won when the symbol lands stacked on three reels.

All titles have a 60-credit minimum bet and high volatility.