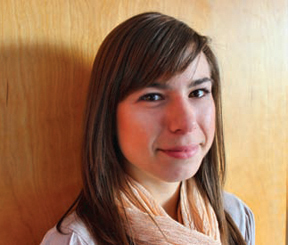 As social marketing manager at Masterminds Advertising, Andrea Janssen knows that original, strategic thinking is essential to crafting marketing strategies for the United States’ most competitive gaming brands. She can also tell you how, in this dynamic new economy, it is equally essential to one’s own professional development.

When Janssen graduated from college in 2009, jobs were scarce, and many recent graduates were struggling to find their footing. By applying originality and clear-sightedness to her own professional development, she set herself apart from the crowd and on course to become a leader in the growing field of social media marketing.

Janssen initially pursued an undergraduate degree in music, but she was drawn to her marketing classes. Upon graduation, she decided that pursuing a master’s degree in entertainment business would be a good way to combine her interests and become more competitive in the job market. In the interim, she worked at the family business—a small retail shop that sells horse supplies.

“Since selling hoof dressing and hunt coats didn’t seem to line up with my career goals, I asked to be in charge of the store’s marketing,” Janssen laughs. “We didn’t have a marketing budget to speak of, so I had to be… creative. I’d learned about social media’s potential in class and had a feeling it was going to be big.”

When asked what advice she would give young professionals, Janssen states that sometimes, you need to create your own opportunities. For her, this meant finding an aspect of the family business that would enable her to develop the skills she needed.

“It also meant deciding to enter a new field where, even at my age, I could be considered an expert,” she explains with regard to her decision to focus on social media marketing.

Although her internal motivation has been an important aspect of her success, Janssen also feels fortunate to have found a company that supports her professional growth. After completing her master’s degree, she started in an entry-level position at Masterminds Advertising, where she quickly advanced to her current position.

“Even though I was young, Masterminds gave me the opportunity to prove myself and rise through the ranks,” she says. “You get out of working here what you put into it.”

The success of the projects to which Andrea has contributed reveals the quality of her work. Accolades awarded to her projects include Best Social Media Program at the AGA Awards, several Adrian Awards, a Gold Romero Award, and a Destiny Award. Additionally, popular industry publications such as Social Media Examiner, Socially Stacked, Huffington Post and Social Media Marketing for Dummies, 2nd Edition have featured her work.

As for the nature of the work itself, social media is always changing.

Considering the dynamic nature of her specialization and her strong work ethic, Andrea’s final advice to other emerging leaders does not come as a surprise: