Teams, leagues and sportsbooks are pretty cozy, to their mutual benefit.

U.S. sports leagues once were among the most outspoken opponents of legal sports betting. Along with the NCAA, they tried to thwart New Jersey’s challenge to the 1992 Professional and Amateur Sports Protection Act (PASPA), which barred legal sports wagers outside Nevada and a few other jurisdictions.

Never mind that bettors illegally wagered billions of dollars on sports each year. In 2015, NFL Commissioner Roger Goodell said legal bets would subvert “the core entertainment value of fair and honest competition” and basically replace it with greed. NBA Commissioner David Stern wrote that a legal sports betting industry would imperil “the fundamental bonds of loyalty and devotion between fans and teams.” And MLB Commissioner Bud Selig said athletes would no longer be viewed as “exceptionally skilled and talented competitors,” but “mere assets to be exploited for fast money.”

Even so, PASPA was overturned, New Jersey got the ball rolling and other states soon piled on. As of July, according to the American Gaming Association, sports betting was legal in 21 states, 10 more states were in the queue, and legislation had been pre-filed in three additional states.

Times and attitudes have changed. The once-bright line between sports and betting has faded. The two now go together like—well, like peanuts and Cracker Jack.

DraftKings, for one, has partnered with the New York Giants and the Philadelphia 76ers, among several others. PointsBet has teamed up with the Indiana Pacers, the Colorado Avalanche and the Chicago Bears. BetMGM’s partners include the Denver Broncos, the Las Vegas Raiders, the New York Racing Association and the LPGA Tour.

Nowadays, a week doesn’t pass without a sportsbook hooking up with a U.S. pro sports team or league. In April, when the NFL announced its “tri-exclusive partners”—Caesars, DraftKings and FanDuel—no less than Commissioner Goodell said the league would “engage fans through legalized sports betting” through the deals, which gave partners the right to use NFL branding, develop NFL-themed free-to-play games and integrate their betting content into NFL properties. 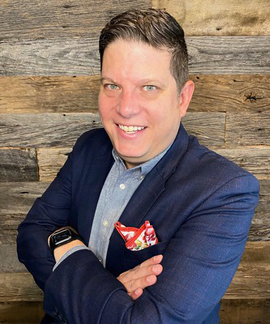 “The more you can create brand impressions in a relevant, meaningful way, the higher the likelihood that that brand recall will kick in when someone goes to make a wager.” —Josh Swissman, Founding Partner, Strategy Organization and CEO of Moneyline Sportsbook

The partnerships are basically a form of advertising, says Josh Swissman, founding partner of the Las Vegas-based Strategy Organization and CEO of Moneyline Sportsbook. The sports franchises get big bucks, sometimes millions of dollars a year. The sportsbooks get visibility: eyeballs in the arenas, at sportsbooks and on mobile apps.

“It’s a perfect audience to target, a perfect place to elevate the brand and a good way to stand out in the crowd,” says Swissman. “Those who watch professional sports are more likely to bet on sports in general. Ultimately, what these operators want is an influx of new customers.”

One recent example is the marriage of WynnBET and the Colorado Rockies. As part of the agreement, WynnBET can host “premium hospitality events” at Coors Stadium in Denver and give fans a chance at once-in-a-lifetime experiences, like throwing out the first pitch. WynnBET signs will be on steady rotation behind home plate and on video boards in left field. The brand name will be inescapable.

BetMGM’s association with the Washington Nationals gives it mobile coverage within two blocks of Nationals Park, and also allows the provider to cross-market properties like Borgata in Atlantic City, Bellagio and MGM Grand in Las Vegas and MGM National Harbor in Maryland.

A deal with the Philadelphia Eagles gave Euro sportsbook Unibet access to a broader U.S. audience. Catherine Carlson, Eagles’ senior vice president for revenue and strategy, told a G2E webinar, “People weren’t familiar with their brands in the U.S., so that involved a lot of brand-building assets, like stadium signage, digital media assets and use of IP and marks.”

In yet another example, Caesars Entertainment’s deal with the Arizona Diamondbacks enabled Caesars’ mobile sportsbook to launch in that state. The Las Vegas-based company will build a branded sportsbook and bar next to Chase Field in Phoenix.

In her prior role as senior vice president of public affairs for the AGA, Sara Slane was a leading voice in the campaign to overturn PASPA. She now runs Slane Advisory, which specializes in the development of these intricate partnerships. The relationship is “symbiotic,” she says. “The sportsbook operator gets a very specific, hyper-focused person, a fan they can acquire as a customer.”

When that fan becomes a bettor, she says, he or she “has a propensity to watch more games, to attend more games, and to be more attuned with the team. The majority of team revenues are derived from TV contracts, and the more eyes you have watching that game for a longer period of time, the more engagement there will be from a sportsbook participant.”

That contention is borne out by a 2019 Eilers & Krejcik survey, “Why Americans Do (And Don’t) Bet On Sports,” which found that almost three-quarters of bettors are more likely to watch the whole game if they wager on it. Forty-nine percent watch more of an event if they’re betting, and 59 percent check scores more often if they have money on the line. That jibes with an AGA survey that said about half of bettors are more likely to watch pre-game shows and commentary if they have a wager on a game.

Also according to the AGA report, 39 percent of adult Americans, or about 100 million people, are “either current or potential future sports bettors.” That’s a vast audience and a lot of eyeballs. That’s what the sponsorship deals help to deliver.

It may be too soon to measure how the deals increase web traffic, signups and revenues for the sportsbooks, says Swissman. “But the more you can create brand impressions in a relevant, meaningful way, the higher the likelihood that brand recall will kick in when someone goes to make a wager. It creates more of that top-of-mind awareness among the current and potential sports betting community.” 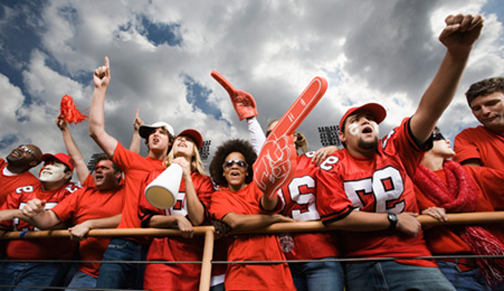 Say a team is a perennial loser, like the Philadelphia Phillies. Will sportsbooks want to make deals with them too, to reach and connect with long-suffering fans?

“A hundred percent,” says Swissman. “In many ways that kind of galvanizes the fan base and creates even more of an association between the fan, the ultimate bettor and the team. Fair-weather fans may fall by the wayside, but even they will occasionally make it to a game.

“This is another great thing about these sports sponsorships—you have a localized market. It doesn’t really matter if you win or lose; there’s still pretty solid value in the sponsorship, because the fans’ passion keeps those eyeballs on the screen or in the stadium. And they’re still going to see those brands that paid good money for those sponsorships.”

Not all sports fans are thrilled about these new alliances. An article on ProFootballTalk.com about the NFL’s sponsorship deals drew withering comments from the stands, to wit:

“At the height of their Hall of Fame careers, Packers running back Paul Hornung and Lions defensive lineman Alex Karras were suspended by the NFL for one year for betting on games. Now the NFL is in bed with Satan.”

“The NFL would sell Lombardi Trophies to make money.”

“The NFL has gone from (Tony) Romo being forbidden to attend a card convention in a casino—what, 10 years ago?—to this.”

Such cynicism can’t stop the roll tide of sportsbook partnerships. In years to come, could naming rights be in the bargain? According to ESPN, PepsiCo pays $3.4 million a year to see its brand name on the Pepsi Center, home of the Denver Nuggets and Avalanche. The list is long: Heinz Field, Citizens Bank Park, the Staples Center, Petco Park. Forbes reported that Allegiant Airlines may have agreed to pay $25 million a year to blast its brand across the Las Vegas Raiders stadium.

“We’re seeing more integration at this point—teams, sportsbooks, casinos and even media—than many imagined,” says Brian Wyman, senior vice president of operations and data analytics for The Innovation Group. “I don’t think it’s beyond the pale to imagine a sportsbook getting naming rights to a stadium or arena.”

“At the same time,” adds Swissman, “if you watch a Golden Knights game on TV, they have local HVAC and window-repair companies that are official sponsors too. The beauty of the sports sponsorship is that it can scale up and down quite dramatically to the extent that a business sees value in that.”

In It to Win It 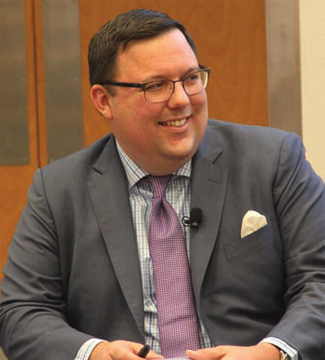 GGB: What are the benefits of team-sportsbook deals, for both sides?

Brian Wyman: Sportsbooks benefit from access to engaged fans and would-be bettors. They get brand visibility and credibility. I’d also expect to see promotional lines offered to fans at the stadium and a more integrated marketing strategy—teams may drive web and social traffic to the sportsbook and provide content for sportsbook media/social ads.

Teams benefit from the cash that the sportsbooks bring as sponsors, of course, but also from increased fan engagement. (Dallas Mavericks owner) Mark Cuban famously noted that the day PASPA was repealed, the value of NBA franchises doubled. Sports betting brings viewership, and teams are in the business of monetizing that viewership.

How about niche sports making these deals?

For the sportsbook, “betting menu” diversification is one way to create a competitive edge. Bettors really love watching good competitive events of any kind. On July 4, ESPN broadcast a hot dog-eating contest followed by cornhole. And we saw an enormous amount of wagering on Russian ping-pong and Japanese sumo wrestling during last year’s shutdown.

Bringing lesser-known events into the fold is something the book can advertise, and of course there’s value in bringing traffic to their site/app to watch the event.

Any comment on college athletes getting involved in promotional deals, or is that just verboten because of integrity concerns?

We’re seeing college athletes already working with Barstool to do cross-marketing. The NCAA will probably watch the next few months unfold and issue some revised guidance. I think we’ll see professional athletes doing endorsement deals with sportsbooks, but I think everyone will—prudently, in my view—stop short of offering promotions where the athlete is out there saying, “If you bet on me tonight …”

If a team is a loser, will sportsbooks make deals with them too, to reach the fans?

Absolutely. Market capture is incredibly important right now. Plus, whether a team is good or bad, the point spread is the great equalizer. Sports betting can give a fan of a perennially bad team something to root for.

Why have the leagues changed their tune so remarkably since legal sports betting became widespread?

Because they’re going to make a lot of money.