The outbreak of the Coronavirus has had a major impact on the gaming industry. With this in mind, GGB is committed to keeping its readers informed as the world faces this growing pandemic. GGB will provide updated news and analysis on our weekly news site, GGBNews.com.
Casino Communications, Podcasts 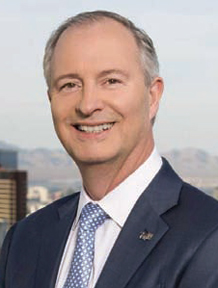 Steve Hill was named CEO of the Las Vegas Convention and Visitors Authority in September 2018. A Las Vegas resident for more than 30 years, Hill founded Silver State Materials in 1987 and supplied concrete and aggregates for many projects in the community. After selling Silver State, Hill was appointed by Governor Brian Sandoval to serve as the first director of the Governor’s Office of Economic Development (GOED) in 2011, where he guided the development of “Moving Nevada Forward,” the plan for diversifying Nevada’s economy. He spoke with GGB Publisher Roger Gros at his offices in Las Vegas in April.

GGB: You had to hit the ground running when you were named to lead the LVCVA because there’s a lot of action, such as the expansion of the convention center, the development of the Raiders stadium and other changes going on in the market. How did you keep up with it immediately?

Hill: How I keep up with it is, I’ve got a great team here, and one of the easiest products in the world to sell, and I have a lot of help. So, that’s really the key to being able to operate any organization this size.

Overall, we currently have 3.2 million total square feet—1.9 million of which is exhibition space. So, the expansion will take us to 4.6 million square feet of total space. And by the time we open, somewhere between 2.4 million and 2.5 million in the exhibition space.

In addition to the LVCVA expansion, the Sands Convention Center, Mandalay and MGM have opened expansions, and Caesars is building a 400,000-square-foot convention center behind Harrah’s and the Linq. Do we ever get to the point where there’s too much meeting and convention space here in Vegas?

I suppose that’s possible. But I think what we’re seeing, and what the properties are seeing, is real demand for meetings in Las Vegas. Show managers know that when their shows are in Las Vegas, they get a pretty significant bump in attendance, because people just want to come here. And so, we’ve seen a lot of demand, and we think that what’s being built now responds to that demand.

And we’ve actually restructured a little bit here, in anticipation of those expansions coming online. We’ve worked to help the properties fill those facilities, so we’re aware that there is a lot of meeting space. We’re going to have a 30 percent to 35 percent bump in total meeting space in the destination. And we want to make sure that’s all additive, and it doesn’t become something where shows are just shifting around in the destination.

The Las Vegas convention center is so big right now; you have just announced you’re talking with Elon Musk about doing kind of a people-mover system, and that sounds pretty interesting. Give us some of the details of that.

We’re excited about that. One of the things that we’re really focused on here is innovation—both at the convention center and the destination itself. And obviously, the Boring Company project is a really innovative with the use of existing technology. What we’ll have is a set of parallel tunnels. They’ll be one direction each way. Those tunnels have a 12-foot interior diameter, and basically just a road lane at the bottom. So, you can drive anything through those tunnels. What we’re planning to do, though, is operate autonomous vehicles. There will be Tesla Model X’s, or Model 3s, or potentially an autonomous tram that can move people from the expansion hall, the West Hall, back to the Central Hall area, and to the South Hall, and cover easily the entire campus. We’re over a mile and a quarter from one end to the other, once we get the expansion built. We think this is an opportunity to easily move people around the campus, which is important, but also to do it in an innovative and fun way.

The year 2020 is going to be a big year for Vegas. How is the arrival of the Las Vegas Raiders going to change what’s happening here?

Being an NFL city makes a statement. I’ve been here 31 years. I’ve had the opportunity to watch Vegas grow and mature. And this is a recognition of that growth. It will just bring a huge amount of excitement. But, on top of that, having the stadium here opens up opportunities that we just haven’t had a place to provide in the past. It’s the one venue size that was not available in Las Vegas, and so, events that are going to attract 45,000, 50,000, 60,000 people, had to skip Vegas, because there was no place to do that. That stadium is going to bring interest from people that we haven’t had the opportunity to draw in the past. And it will make a difference in the community. This is going to be one of the turning points we’ll look back on 30 years from now, and think, “Yeah, that mattered.”