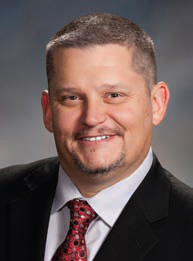 Steve Walther recently added marketing to his product management duties at Konami Gaming. Walther has a 20-year history in gaming on the supplier side, working for such companies as Aristocrat and Aruze. At Konami, he is responsible for global product planning, life-cycle support and performance analysis, which includes gathering and prioritizing product and customer requirements, defining the product vision and roadmap, and building product launch and marketing strategies. He spoke with GGB Publisher Roger Gros at the Konami offices in Las Vegas in May.

How has your role changed with the additional responsibilities you recently took on?

You debuted a game at the NIGA trade show that was very impressive, Castlevania. Give us the genesis of that game and how it was developed.

Castlevania is very near and dear to the Konami heart and to anyone who has been playing video games since the early 1980s on the Nintendo-style game systems. There have been almost 30 versions of it over the years, so it’s a very popular game for Konami.

We felt if we were going to bring it to Konami Gaming, we had to treat it right. So we’ve created a hybrid of the different versions, from the 8-bit versions all the way to the modern 3-D style graphics. At the heart of it is a romance game, with the hero trying to rescue his princess. And having the palate of that 43-inch curved display, we can use some incredibly high-definition graphics. And you really get involved in the game.

You debuted Frogger as a skill game at Level Up in MGM Las Vegas earlier this year. How’s that been doing?

It’s been doing well for the location. It’s not in the most heavily trafficked area of the floor, but it’s been hitting the demographics we’ve been looking for. Frogger Get Hoppin’ is the first skill-based game that was approved in Nevada via the new Innovation Beta program. We’re very happy that Konami could participate in this groundbreaking experiment by introducing variable payback into the games. The player actually moves the frog, and it’s all about you.

Tell us about your new tournament program.

Our True-Time Tournaments have been very well-received. In addition to being able to offer on-demand tournaments, where the players can enter and play the tournaments where they’ve earned entries at any time, we’ve got the ability to synchronize tournaments as well. We’re able to use our True-Time Window, a picture-in-picture on the screen that can access the tournament and play in real time. This way the operator doesn’t have to take any games out of play for the tournament.

And how about the Fortune Cup horse-racing game?

There’s a huge demand for Fortune Cup. We’re in the process of making sure we’ve got all the elements right. We’re known for our quality and reliability, so when we bring out new products like Fortune Cup, like Frogger, we want to make sure we’ve got everything right and fully tested.

Now, Fortune Cup has been running in Japan for 30 years or more, but we want to make sure that when we bring it to the U.S. it has the same quality and reliability that it has in the Japanese arcades. We also had a math engine we had to build. We’re pretty happy with this product, and you’ll see it soon on the casino floors.