Gaming in the Midwest is a delicate balance between competition and saturation. 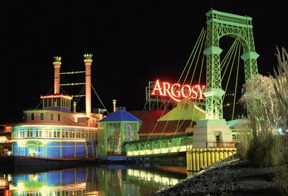 In the Heartland, gaming competition is stronger than ever. As new casinos continue to enter the market, the increased competition is keeping casino operators on their toes, as they feel the effects of potential market saturation, and flat, even declining, revenues.

The six states that make up the Heartland—Ohio, Michigan, Illinois, Iowa, Missouri and Indiana—are home to nearly 90 gaming facilities.

“Most operators don’t work in a vacuum; we all have competition,” says Bill Renk, director of public relations and promotions at Jumer’s Casino and Hotel in Rock Island, Illinois.

“Competition for us is a way of life. As much as you’d like to not have it, competition makes you work harder. You’ve got to be moving forward and look for elements that give you an edge. You’ve got to have a charged battery every day and have your head in the game.”

Jumer’s opened as a riverboat more than 20 years ago and moved to a new land casino in 2008, enabling it to better compete in the Heartland, Renk says. From December 2008 until this year, Jumer’s saw year-over-year revenue growth, but now “it’s leveling off, perhaps due to competition,” he says.

“When we entered the market, we stole some share, but also grew the market as well,” says David Patent, president and chief operating officer of Rush Street Gaming, which operates Rivers.

Though relatively new to the market, Patent says Rivers has found its niche among the nine casinos in the Chicagoland area, by offering a higher bet limit than the others. Horseshoe Hammond Casino in Indiana had been the area’s “800-pound gorilla” in table game revenue, but Rivers has surpassed it, he says.

Like Jumer’s, Ameristar Casino Hotel East Chicago in Indiana also felt the impact of Rivers, says Michelle Shriver, Ameristar senior vice president of operations. She says Ameristar properties see the biggest impact immediately after a new property opens, and then it levels off.

Illinois revenue was down about 20 percent the first year after the state implemented a smoking ban in 2008, because many Illinois gamers went to Iowa and Indiana, which do not have smoking bans at casinos, Swoik says. That combined with the economic downturn has led to a statewide revenue decline of 35 percent over the past four years, and he predicts that Illinois will never see a full comeback.

Illinois’ smoking ban has worked to Iowa’s advantage, says Wes Ehrecke, Iowa Gaming Association president. He says more than half of Iowa gaming business comes from other states, like Illinois.

Iowa has 18 commercial casinos and three tribal casinos, and state gaming revenues have been mostly flat over the past four years, says Brian Ohorilko, head of the Iowa Racing and Gaming Commission, the state’s gaming regulator. He says so far this year, statewide revenue is down about 1 percent.

To stay ahead of the competition, Iowa is working to get authorization for the “convergence of online gaming with bricks-and-mortar casinos” to attract the next-generation gamer, Ehrecke says. A bill passed the Senate during the last legislative session, but failed in the House. He says something similar may be reintroduced when the session begins in January.

Everyone in the Heartland has been conscious of the market’s increasing competition, says Penn National spokesman Joe Jaffoni. The net effect, he says, is that Penn is outpacing its competition.

“We recognized the competition and talked openly about it, and have been well-prepared,” he says. Penn operates 11 casinos and racetracks in the Heartland.

Planning and budgeting for new competition is essential to continuing to be a strong competitor in the market, Shriver says. She says Ameristar doesn’t wait for something to happen and then react; instead they plan for what’s to come, and look for ways to continue providing an experience to customers in a profitable way. Ameristar has four Heartland casinos.

Indiana has seen declining revenues at the state’s 11 casinos and two racinos over the past few years, says Mike Smith, president and chief executive officer of the Casino Association of Indiana. The Indianapolis Business Journal reported that statewide casino revenue fell 3.5 percent in the first eight months of 2012 and remained flat from September to October.

“Indiana is a competitive market,” Smith says. “Everyone is close enough that everyone is competing with someone. The pressure of new competition is an issue for us going forward.”

Indiana has felt the brunt of increased competition from other states, particularly Ohio’s entry into the Heartland gaming market, says Ed Feigenbaum, gaming analyst and publisher of the Indiana Gaming Insight newsletter. He says new properties always “shift the market share.” For example, Rivers cut into revenues in northwestern Indiana casinos, which compete in the Chicago market, he says.

Feigenbaum says the opening of the VLT casino at Scioto Downs racetrack in Columbus in June “stunned” Penn’s Hollywood Casino Lawrenceburg in Indiana, which has suffered declining revenue and laid off about 200 people in September.

Jaffoni says the reality of competition is recognizing that changes are sometimes necessary as customer demand evolves, even if it means layoffs.

When Horseshoe Casino in Cincinnati opens in the spring, “it will be an absolute killer for Indiana,” Feigenbaum says, adding that it will directly impact the state’s Lawrenceburg, Belterra Casino Resort and Rising Star Casino properties.

Ohio has already made a strong impression on the Heartland gaming market, as three casinos have opened there in the past seven months, and a fourth is coming soon.

“The regional market has felt more of an impact from us because we’re new,” says Marcus Glover, senior vice president and general manager at Horseshoe Casino Cleveland. “We don’t cannibalize existing supply; we complement it.”

Glover says he’s seen an “uptick in promotions” in surrounding states, an indication of Ohio’s strength and the impact of Ohioans staying in their home state to gamble.

For Michigan, Ohio’s effect has been less than expected, which “speaks to the quality of Michigan gaming,” says Robert Russell, gaming analyst and principal of Regulatory Management Counselors based in East Lansing, Michigan. “It could have been worse.”

Gregg Solomon, president and CEO of MotorCity Casino Hotel in Detroit, says Hollywood Casino in Toledo has had a small impact on second-quarter revenues, but nothing substantial.

“We’re not doing anything that heroic in response to Toledo,” Solomon says. “We’re sticking to what we do best. We’re locally owned (by Marian Illitch), so we have to be more innovative.”

Overall, Solomon says the Detroit market has remained flat even with new competition from Ohio.

“We’re all intense competitors, but we’ve all carved out our own niche in the market,” says Solomon, explaining that MotorCity’s “party atmosphere” is different from Detroit’s other casinos.

With three Detroit casinos and 20 tribal casinos, Michigan gaming revenues have been stable over the past three years, Russell says. He explains that Michigan was in a single-state recession long before the national recession, so it “didn’t have as far to fall as other gaming markets,” like Illinois and Indiana. As the state’s economy grows, Russell says there is potential for casino growth.

Missouri Gaming Association Executive Director Michael Winter says casinos in the state have “held their own” amid increasing competition in the Heartland. Year over year, Missouri has seen only about a 1 percent increase in adjusted gross receipts, he says.

On October 30, Isle of Capri Casino Cape Girardeau opened, the newest addition to the Heartland and Missouri’s 13th and final casino. Reports expect the new Isle property to impact others in the Heartland, particularly Harrah’s Casino in Metropolis, Illinois.

Missouri implemented a cap of 13 casino licenses in 2008. “It’s a number everyone is comfortable with, that we can all sustain,” Winter says.

With increasing gaming competition becoming a constant in the region, many in the industry say it’s difficult to tell if there is room for growth or if markets are already saturated.

It’s all in the “eye of the beholder,” says Ohorilko. In Iowa, reports have estimated that any new properties could garner up to 25 percent of existing gaming business in the state, says Ehrecke.

Illinois Governor Pat Quinn vetoed recent attempts to expand casinos and allow racetracks in the state to become racinos, an effort to avoid market saturation. Illinois has 10 casinos and six racetracks, which do not allow slot machines.

Swoik says his organization is not opposed to “reasonable expansion, but not in existing markets.” Illinois has a graduated tax rate on casino revenue, up to 50 percent on adjusted gross receipts exceeding $200 million. So, adding more casinos to the state generates less tax revenue because none reach the maximum tax threshold, he says.

Parts of Illinois, like the Chicago area, show signs of market saturation, and others like northwestern Illinois, where Jumer’s is located, show little signs of growth, Swoik says.

“It’s saturated with respect to the number of casinos available,” Renk says. “We don’t relish seeing any more in this marketing radius.”

Patent disagrees. He says occupancy at Rivers is “off the charts,” and slot revenue is growing and has increased about 10 percent in both September and October, a trend he expects to continue. Table game revenue, however, is “fairly maxed out,” he says, mainly because there is little room to physically expand.

“We think the market is not saturated yet,” Patent says. “We argue that there’s still some room, and we would love to expand.”

Michigan’s market is “mature,” but not saturated, Russell says. However, Solomon believes the Detroit market is nearing saturation. Neither favors expansion.

Statewide, Solomon says, “There is gaming within a tank of gas of any locale.”

Indiana has reached its peak, but tribal casinos may be on the horizon, Smith says. The Pokagon Band of Patawatomi Indians has included a possible casino with its land development plan in South Bend in northern Indiana. Feigenbaum expects the issue to be litigated and says any casino is likely several years away.

Having multiple properties in the same market can complicate the impact of gaming competition for operators.

“We recognize some cannibalization of ourselves,” Jaffoni says, explaining that much of Penn’s competition has been “self-inflicted.”

Most agree gaming competition in the Heartland is not likely to ease up any time soon. Operators must find their own way to survive the competition by stepping up marketing, boosting non-gaming amenities, providing top-notch customer service, renewing gaming floors, and most of all, understanding what most appeals to their market.

“We’re focused on asking guests what’s most important to them,” Shriver says. “We respond to their requests, and that’s what keeps us competitive. We’re constantly adjusting what we’re doing. Ultimately competition is a good thing. It forces us to focus on what we can offer our guests.”