There are lots of hurdles on the road to success as a table game inventor-and just as many inventors willing to go for broke. How can you tip the odds in your favor? 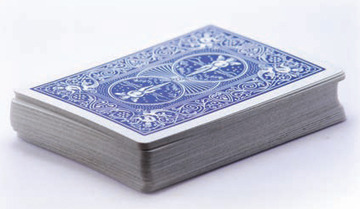 Creating a successful casino table game is like winning the lottery or becoming a movie star—the odds against it are astronomical, but that doesn’t keep people from trying.

“I’ve probably done the mathematics for hundreds of table game ideas over the decade-plus I’ve been doing this, and I cannot think of one that’s gotten really widespread placement,” says Eliot Jacobson, and he should know. The president of Santa Barbara-based Jacobson Gaming is also the author of Contemporary Casino Table Game Design.

Of the scores of table games that make the rounds each year, Jacobson calculates that one in 50 may get to market, and of those, just one in 10 really takes off. So for every Three Card Poker or EZ Pai Gow, there are hundreds, perhaps thousands of games that come up snake eyes.

So what’s a table game inventor to do? Is it possible to boost the odds that an idea will catch fire, and not end up on the landfill of broken dreams?

“It’s a tough road,” says Todd Cravens, former president of AGS and now CEO for the Americas of TCSJohnHuxley in Las Vegas. “No. 1, we have an industry that’s highly regulated. No. 2, in order to move a table game off the floor, what replaces it has got to do better.”

Inventors must navigate a labyrinth of tests, trials and regulatory speed bumps before a new game drops. Once it’s live, the game must prove itself fairly quickly—depending on the jurisdiction, within 30, 60 or 90 days. Most flame out fast, says Craven. “I wouldn’t say it’s an 80-20 rule. It’s more like 90-10. It’s an uphill battle. But the guys that do well with it do really well.”

“There are some characteristics that may increase a game’s chances of success,” says Jacobson. “In these poker-style games—for example, Ultimate Texas Hold ‘em, Texas Hold ‘em Bonus Poker and games similar to that—there is sort of a cookie-cutter approach where you have an ante bet, some sort of blind bet, and then a series of play bets as certain cards are revealed.”

But following the recipe is no guarantee you’ll get soufflé.

“I’ve seen dozens of games that are smart, but after a while they start to look a lot like each other,” he says. “The territory is so worked over, it’s hard to make room for a new one.”

New takes on blackjack are problematic, too. “It’s tough to learn. So all the variations that try to make the game better or easier add something or take something away. You can think of any number of iterations, but again, it’s hard to get a new game in.”

He cites a few big successes—Spanish 21, Blackjack Switch, Free Bet. “Also, there was a game about 15 years ago, Super Fun 21, that made it big for a while, but its success went downhill after ‘blackjack pays 6:5’ started to spread in 2003.”

When it comes to side bets, there’s good news and bad news. “A side bet is probably the easiest thing to bring to market. There are mainstays in the side bet area that have been successful for a long time—21+3 comes to mind, or Pair Square. The problem is they pay very, very little. You almost have to give them away to get them onto a table.”

And then there are the one-offs: spanking new, out-of-the-blue game ideas that are especially hard to pitch, because “people don’t trust new.”

If there’s any rule at all, Craven says, it’s KISS: Keep It Simple, Stupid. A game must be easy to explain, easy to understand, and easy to play. Keep in mind, dealers can help make or break a game; their endorsement is essential.

“The dealers get X amount of hands per hour; that’s one of their metrics. If a dealer says, ‘Hey, you should play this game, throw five bucks on there,’ that’s a really big part of it. They don’t want to be dealing a cumbersome game that won’t allow them to do their job well.”

Ditto for side bets. “If there’s a new blackjack side bet, it’s important to me that I don’t have to change my strategy on the base game,” Cravens says.

Every inventor feels certain he’s come up with the next Ultimate Texas Hold ‘em (a Snow invention). The Rochambeau guy, for example, “gave me all the data you can imagine: ‘People know rock, paper scissors, it’s played in a gazillion countries by a gazillion people.’ Well, he got his game on the floor and it lasted about two weeks.”

To improve the odds, Snow suggests, don’t reinvent the wheel. “In the last 26, 27 years, the overwhelming majority of games that have succeeded are poker games. The No. 1 game in the industry is Three Card Poker. The No. 2 game is Ultimate Texas Hold ‘em. No. 3 is Mississippi Stud.

“Pai Gow Poker, Crazy 4 Poker, Four Card Poker, Texas Hold ‘em Bonus—almost all poker games. Even Casino War is essentially one-card poker. So when people say there’s no formula, OK, fine. But it’s not alchemy. My money is on poker games, side bets or blackjack derivatives. Geoff Hall is like the king of blackjack; everything he does is blackjack and he’s been very successful at modifying blackjack to make it more fun.”

What hasn’t worked: dice games, cribbage games and backgammon games—as well as most of the games Snow himself devised. “If you include everything, I’m probably batting 1 out of 6 or 7, which in baseball would put me on the bench. But because of the resources of the company behind me, I’m able to take a lot of at-bats.

“We evaluate successes differently,” he adds. “If I have a game with 25 installs, I don’t consider that to be a success. But for an inventor off the street, that might be pretty cool.”

Hopeful inventors can take comfort in the story of Derek Webb, who invented Three Card Poker in England in the mid-1990s, and was compelled by British regulators to shop it first in the U.S. to get some performance stats. Webb once likened the process to “pulling teeth.”

“It became the most popular proprietary game of all time, a staple on most casino floors,” says John Hemberger, head of the table products division at AGS. “But 21 years ago when it was introduced, it had just as unlikely a chance of success as every other game.”

Anatomy of a Winner

That simplicity extends to the look of the game, which must invite and not intimidate players, says Hemberger. “You don’t want the layout to scare them off, with designs that are too hectic or cluttered with pay tables everywhere. You’re always trying to keep that clean, simple look, so when players walk up, within watching a hand or two they can figure out how this game works.”

One of the firm’s most successful products is Buster Blackjack, a side bet introduced last year that now has some 600 installs. “We’ve scaled it out in the marketplace pretty quickly because it’s so simple,” says Hemberger. “If the dealer busts, you’re going to get paid, and the more cards in the dealer’s busted hand, the more the payout increases. With a side bet like that, there’s a community dynamic. Everybody’s rooting for the same event, and everybody gets paid when it happens. The hit frequency is 28 percent—quite high for a blackjack side bet—so one in every four hands is a winner.

“When people see winners, they feel like there’s an opportunity for them to get paid.”

A casino can spread the word through marketing, and the provider may pitch in with play-for-fun versions of proprietary games on its website. “That’s a huge sales tool for us; it allows decision-makers and shift managers to play the game and get a good feel for it,” says Hemberger.

While the road to success is littered with non-starters in the table games space, Snow says SGI “is always trying things, on all different fronts, constantly testing—people have no idea. Ninety-nine times out of 100, those ideas never see the market, but we try everything, because if there’s one thing you learn over time, it’s that the marketplace is not predictable. If things go one way, we’ll be there. If they turn the other way, we’ll be there. We’re not a company that says we are banking on one thing, and if it works we’ll be successful, and if not, we’re all on the unemployment line.

Meanwhile, Jacobson has a great name for the next great game: Louisiana Baccarat.

According to his formula, a winning name “sounds like it’s been around a long time.” Like Mississippi Stud and Caribbean Stud, names that “evoke geography” tend to be strong, he says. In addition, Louisiana “has a ring to it, because it contains the word ‘easy,’ and there’s a positive value to that.” Completing the equation, “the French are associated with Louisiana and also with baccarat.”