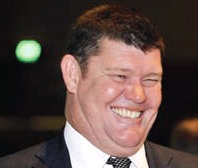 With the news that Sri Lanka has prohibited new casinos in Colombo, Crown Resorts Inc. is shelving a plan to develop a five-star resort on the south Asian island.

Sri Lanka has banned casinos in mixed developments in the nation’s capital and largest city, Prime Minister Ranil Wickremesinghe told the nation’s parliament on January 29. The government also told Crown CEO James Packer he is unwelcome in the country, according to a report in the Daily Mail. The prime minister also extended a dis-invitation to Packer.

“Packer says he will not come. Who asked you to come?” Wickremesinghe said in a statement released by his office. “Please don’t come—not in this lifetime.

“We need only good investors,” Wickremesinghe added. “We don’t want an economy relying on casinos.” The PM added that developments without gaming are welcome. “They can conduct all other activities,” he said.

President Maithripala Sirisena was elected in January thanks in part to strong support from Sri Lanka’s influential Buddhist monks, who opposed plans to bring gaming to Colombo. The new president wasted no time canceling the 5 percent tax rate promised to Packer to build the 450-room resort and two other foreign-backed developments.

The Mail reports that a handful of “local, low-key casinos” have quietly operated for decades in Sri Lanka. The future for them now seems unclear. In January, Finance Minister Ravi Karunanayake said those casinos have until mid-April to pay a flat fee of 1 billion rupees (US$7.6 million) to remain in business.

Crown issued a statement saying it “respects the Sri Lankan government’s decision. On that basis our project will not be going ahead.”