The path to legal sports betting in the U.S has been long and circuitous, but last month’s Supreme Court decision has supercharged its future 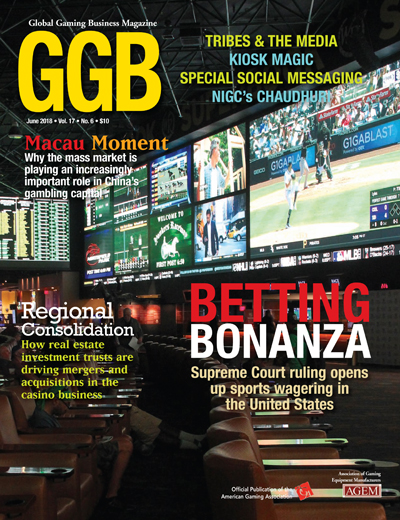 On May 14, the U.S. Supreme Court held that the Professional and Amateur Sports Protection Act (PASPA) was wholly unconstitutional and overturned it in a 6-3 decision. Individual states will now have the opportunity to decide whether they want to legalize sports wagering within their borders.

The decision has wide-ranging implications for all states, all gaming operators, most gaming vendors and the general public—much more than GGB can publish within these pages. For all the details of the Supreme Court decision, its implications for individual states and jurisdictions, the major and emerging players, the leagues and all the legal mumbo jumbo, read GGB News each week (GGBNews.com).

But for context, we’ll trace the timeline, the reaction of some of the major players, and the current status in jurisdictions where sports betting is likely to emerge.

TIMELINE OF SPORTS BETTING IN THE U.S.

The Professional and Amateur Sports Protection Act, sponsored by former pro basketball player and then-New Jersey Senator Bill Bradley (l.), is enacted. It prohibits sports betting nationwide but grandfathers in Nevada, Delaware, Montana and Oregon, which already provide that wagering via casinos or lotteries. The bill gives New Jersey one year to affirm a referendum that would legalize sports betting at state casinos.

Having failed to pass a bill that would set up a referendum to allow sports betting, New Jersey’s window closes, and along with all the rest of the states, sports betting is now prohibited in the state. Assembly Speaker Chuck Haytaian (l.) is accused of ensuring the victory to a Republican governor as a result.

Delaware legalizes sports betting. The leagues challenge the state’s plan to offer bets on all sports. Eventually, courts decide that Delaware can only offer parlay bets on NFL games—no single-game betting—which was what the Delaware Lottery offered prior to PASPA.

The NCAA, MLB, NFL, NBA and NHL file suit against New Jersey in an attempt to block the state from implementing sports betting on pro and college games. New Jersey inherits the Lesniak challenge.

The 3rd U.S. Circuit Court of Appeals agrees with the leagues in a 2-1 decision.

The full 3rd U.S. Circuit Court of Appeals rules 9-3 in favor of the sports leagues. New Jersey takes its appeal to the U.S. Supreme Court.

The U.S. Supreme Court agrees to hear the sports betting case, surprising observers since the suit was 0-7 until this decision.

NBA Commissioner Adam Silver states that he senses the law will change in the next few years in the United States. MLB Commissioner Rob Manfred says the league wants a say in the future of sports betting.

WHAT IT MEANS TO THE INDUSTRY, THE COMPANIES AND THE PLAYERS

“Through smart, efficient regulation, this new market will protect consumers, preserve the integrity of the games we love, empower law enforcement to fight illegal gambling, and generate new revenue for states, sporting bodies, broadcasters and many others. The AGA stands ready to work with all stakeholders—states, tribes, sports leagues and law enforcement—to create a new regulatory environment that capitalizes on this opportunity to engage fans and boost local economies.” —Geoff Freeman, president and CEO, American Gaming Association

“A great day for the rights of states and their people to make their own decisions. New Jersey citizens wanted sports gambling and the federal government had no right to tell them no. The Supreme Court agrees with us today. I am proud to have fought for the rights of the people of New Jersey. —Former New Jersey Governor Chris Christie

Now entertainment companies formerly driven to offshore locations due to the strict limitations of the PASPA can return to the U.S., bringing jobs and economic opportunities with them… States like Illinois, Michigan and New York, which have been waiting for this opportunity, may now implement pro-business measures to encourage gaming and create the benefits like increased tax revenue that previously only a handful of states were permitted to enjoy. This ruling will create a positive domino effect by allowing any state that wants to, to open its doors and reap the benefits of rationally regulated gaming. —Jeff Ifrah, Ifrah PLCC

“We’ve been working towards this day for a long time and take great satisfaction in the Supreme Court’s decision. Just as we have with our 100-plus locations in Nevada, we look forward to working to make legal and regulated sports betting a big winner for consumers, state governments and all interested parties across the country. If we do this the right way, the only losers will be the illegal bookies that have been operating a massive black market. We’re going to get ready to open for business at Monmouth Park as soon as responsibly possible.” —Joe Asher, CEO of William Hill US, on the plans to open a sports book at Monmouth Park Racetrack in New Jersey by the end of Ma

“Certainly, the tribes in the state will have a very large say. But it may also depend on what kind of pressure comes from outside of the state. Does the Oregon Lottery move on sports betting? Well, that can have an effect on Washington.’’ —Washington State Gambling Commissioner Chris Stearns

“We expect to be able to provide safe, exciting sports wagering experiences to consumers across the country, as we do today in Nevada. We plan to announce our specific approach to this business as we better understand the opportunities and regulations which evolve from the Supreme Court decision.” —Mark Frissora, President and CEO, Caesars Entertainment

“With these two key stakeholders (the professional sports leagues and the gaming industry) failing to find common ground on the ideal framework, there will likely be a stalemate in a number of state legislatures, resulting in fewer bills passing during this current legislative session.” —Dan Wallach, partner, Becker & Poliakoff, P.A.

“What does this mean for states that are eyeing legalizing sports betting as a way to boost state coffers? Well, for one, it means that states should temper some of the rhetoric of large tax windfalls from sports wagering. It also means that states should carefully weigh foisting additional fees on sports wagering operations, if one of the policy goals of a state is to limit illegal wagering.” —Kate Lowenhar Fisher, Gaming & Hospitality Practice Group Chair, Dickinson Wright

“What does this mean for licensed casinos? Mississippi casinos affiliated with Las Vegas casinos that have sports books could find themselves with a short-term advantage over those casinos in Mississippi without such affiliations. The latter group will have to wait a while longer for sports betting suppliers to be licensed and approved for gaming in Mississippi, while the former may transfer their experienced race and sports book employees to their sister Mississippi properties right away.” —Tommy Shepherd, partner, Jones Walker

“We have been eagerly anticipating and preparing for this decision with both Rush Street Interactive and our land-based properties. It’s exciting news for the consumer, the industry and the states. In addition to providing sports enthusiasts with a better, safer environment, today’s Supreme Court decision will redirect revenue previously lost to the black market and instead generate much-needed tax revenue at state and local levels. We look forward to adding sports betting across all our gaming platforms as soon as possible.” —Greg Carlin, CEO, Rush Street Gaming

“The future for the (Atlantic City) industry looks even brighter with the Supreme Court decision today. I anticipate sports wagering will fuel future growth for the casinos and add a new attraction for visitors. Put all that together and it should be a strong summer and a brighter future for New Jersey’s gaming industry. —New Jersey Casino Control Commission Chairman James Plousis

STATE OF THE STATES

While New Jersey and Delaware have a head start on legal sports betting, there are several other states that have already passed or are seriously considering passing sports betting legislation. These charts were produced by Fantini’s Public Policy Review (PPR), the only single source for all activity involving gaming legislation, regulatory and legal issues affecting the global gaming industry. It is a tool used by investors, regulators, casinos and gaming suppliers and affiliates. For more information on obtaining a free copy of the sports betting report, visit FantiniResearch.com.