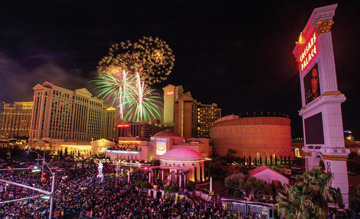 In November 2013, Penn National became the first gaming company to split itself in two.

By spinning off its most of it property assets into a real estate investment trust, or REIT, the Pennsylvania-based gaming company created a new, wholly separate publicly traded entity called Gaming & Leisure Properties Inc. As part of the strategy, GLPI then took ownership of 21 of Penn’s 29 casinos and racinos, and leased them back to the original company through triple-net lease agreements.

And the point of this whole chess game?

For one thing, a considerable tax advantage, says Ron Kuykendall, of the National Association of Real Estate Investment Trusts, NAREIT. “The REIT is required by law to pass at least 90 percent of taxable income to shareholders through dividends, and for every dollar, it gets a deduction from its corporate tax,” says Kuykendall. “Practically speaking, the REIT can take a full tax deduction and pay no corporate taxes.”

Second, in the marketplace, the promise of regular dividends may make REITs a more attractive investment proposition.

Third, REITs have lower borrowing costs than gaming companies, so a spin-off adds borrowing power and frees management to concentrate on growth.

Finally, as a separate entity in the role of “supplier,” a gaming-related REIT may be able to sidestep regulations limiting the number of casinos it can own in a given jurisdiction—a strategy first tested when GLPI acquired the property assets of 14 Pinnacle Entertainment casinos in eight states. UNITE HERE, the casino workers’ union, fought the deal in Indiana, saying the law limits casino ownership to two properties in the jurisdiction. If the deal—which is still not final—proceeds as planned, GLPI would own three.

A Good Fit for Gaming?

In 2012, after Penn National announced its REIT, shares gained 28 percent, the biggest surge in four years. The hype has fizzled since then. In January, Fitch Ratings reported GLPI shares had declined 30 percent from a 52-week high in mid-2015; in an accompanying note to investors, Fitch analyst Alex Bumahzny said REITs in general may be a poor fit for the gaming sector because of the potential for conflict between the REIT and its operating company, as well as the industry’s “cyclicality and substantial (cap-ex) needs.”

Moreover, Uncle Sam has gotten wise to the use of REITs as a potential tax dodge. With the Protecting Americans from Tax Hikes Act, or PATH, signed by President Barack Obama in December 2015, the Internal Revenue Service sent a signal that it would “not look kindly on companies spinning off their real estate as a tax-free event if there’s no other business reason for it,” says Frank Fantini, of Fantini Gaming Research. “If it’s just financial engineering, profits made in the spin-off can be taxed.”

None of this has stopped other gaming companies from jumping on the REIT bandwagon. MGM Resorts International is forming MGM Growth Properties, which will own the real estate associated with 10 of the company’s resorts, including seven on the Las Vegas Strip. Unlike Penn National, MGM will own 70 percent of its REIT and retain ownership of two key assets, the Bellagio and MGM Grand Las Vegas. The debt-reducing strategy earned some applause from Fitch, which maintains its positive outlook on the Lion.

David Katz, managing director of New York-based financial services firm Telsey Advisory Group, agrees that MGP could be advantageous for the Las Vegas gaming giant. “We have a positive view on it because MGM owns a lot of really big-box real estate in a very concentrated, singular market,” Katz says. “Trying to alleviate some of that bad risk is what they’re ultimately trying to achieve, as well as providing themselves in the future with a vehicle with a lower cost of capital that they can use to grow.”

Caesars Entertainment, meanwhile, is planning a REIT as part of its Chapter 11 bankruptcy reorganization. If that plan is approved, the REIT would own two dozen casinos, which Caesars would continue to manage. In the process, the operating company could shed about half of its $18 billion debt.

Real estate investment trusts, created by an act of Congress in 1960, have been compared to mutual funds. They were designed “to give all investors the opportunity to invest in large-scale portfolios of real estate,” says Kuykendall.

“REITs made it possible (for the average person) to have the benefits of real estate investment. Commercial real estate is a specific type of asset, different from stocks and bonds, and can be a good income investment because the space leases tend to be long and rent streams tend to be quite stable,” typically in the retail sector.

In the case of Simon Properties, for example, which owns some 400 malls across the country, “the tenants are Nordstrom and Macy. Nordstrom may be 15 years in a mall, so the flow of rents is very consistent and it flows straight through to investors as dividend.” Hospitality may be a more volatile category, Kuykendall says, “because the stays are much shorter. When you think about hotels, the lease is one night. Tenants come and go, and the rates charged at hotels can vary on a nightly basis depending on demand and the time of year. That produces more variability in the revenue stream.”

A similar argument was put forth when UNITE HERE tried to block the Pinnacle REIT. In a court filing, the national hospitality union pointed out “significant risks” associated with the proposed spin-off. “Gaming REITs are a new business model,” the filing said, adding that from December 2013 to April 2015, as GLPI’s stock price declined 27 percent, the NAREIT Lodging REIT index price grew 28 percent.

Also, as the Pinnacle deal demonstrates, acquisitions in the gaming industry do not come easy or fast.

“It can take a year to close a deal in the gaming business because of the regulatory approval process, whereas a REIT can decide to buy a hotel, go to the capital markets, do a road show, raise the money and close the next week or a month later,” says Katz. “That time poses a risk, and I think the capital markets in general are still digesting gaming as a viable REIT-suitable operation.”

The long-term lease structure can also be problematic in a turbulent economy. “If the economy were to head south or the property itself were to underperform, those leases are still fixed, and it creates a lot of pressure. It doesn’t flex down with the performance of the property,” says Katz.

On the face of it, consolidation of interests in the U.S. casino industry seems to defeat a stated purpose of gaming REITs: to acquire new properties. Excluding the $4 billion Pinnacle deal, which is expected to close in April, and its acquisition of the Meadows Racetrack and Casino in Pittsburgh, also expected to close this year, GLPI has added just one property to its portfolio in the past two years: the Casino Queen in East St. Louis.

But more casinos could come up for sale, say, if Caesars sheds assets in a bankruptcy. And as the name Gaming and Leisure Properties suggests, the REIT could look beyond casinos. Moreover, if casinos are an uncertain commodity these days, real estate remains a “tangible asset,” says Fantini. “No REIT is restricted to buying just casinos; they can buy shopping centers, hotels, amusement parks.”

In its court battle with Pinnacle, UNITE HERE pointed out that no gaming REIT has been tested by a recession. As the Motley Fool’s Travis Hoium pointed out in an April 2015 column, “One of the reasons Caesars Entertainment, Penn National and others survived the (2008) recession was because they had real estate to use as collateral to obtain debt.” In the next recession, operating companies “would have to fund operations without the backing of real estate, and if revenue declines, they could see profits and debt funding dry up. Instead of having a safety blanket like real estate to fall back on, companies could go bankrupt when the gaming industry goes into a lull.”

After GLPI’s fourth-quarter earnings report in early February, Standard & Poor’s gave the REIT a qualified thumbs-up, “reflecting our expectation that, despite high leverage, GLPI’s relatively stable and predictable cash flow base will support modest EBITDA growth and allow the company to modestly reduce leverage over the next two years, absent additional acquisitions.”

Chairman and CEO Peter Carlino said the completion of two big acquisitions this year “will result in a larger company with increased tenant and geographic diversity, along with higher cash flows. We are focused on leveraging our unique position as the only stand-alone gaming-focused REIT—as we look to grow over the long term and provide a reliable, attractive dividend to our shareholders.”

As the debate continues, Fantini points out that GLPI shareholders have made out on their investment so far. “Before Penn National announced its REIT, the stock was selling at about $34 a share. If you were a shareholder (when the REIT was formed), you had one share of the new company and one of the old at a combined value of $39.

“Even though the price of GLPI has come down in recent months, the fact is the combined value of the two stocks is 15 percent higher than it was three years ago—that’s not a huge rate of return, but gaming stocks are down right now. They may be coming back up this year. And as a shareholder, for my original investment I now have two stocks combined that are worth more than the old stock alone.”

He adds that there is no one-size-fits-all formula for gaming REITs, and no predictable outcomes.

“These companies are looking at REITs very closely and very seriously,” says Fantini. “They’re not doing any seat-of-the-pants kind of decision. You can’t say REITs are good or bad except on a select basis.”