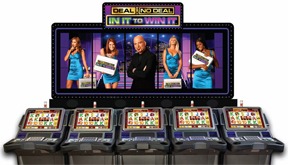 If you are a casino slot executive in the U.S. Southwest or Midwest, you may have seen a strange vehicle pull up to your porte-cochere—a truck hauling an elaborately decorated orange-and-blue trailer, bedecked with the logos and product names of a popular slot brand under the slogan “Innovation Travels.”

It’s the “mobile showroom” of slot manufacturer Spielo International, a customized trailer with 13 cabinets on board forming a microcosm of the variety of games Spielo has to offer. Sales staff departed from Las Vegas in the vehicle on April 15, and as of press time, had visited customers in eight states. “Our goal is to see every single one of our customers across the U.S.,” says Claudia Baskerville, Spielo’s marketing manager for North American casinos, “and it’s been highly successful.”

“At G2E, as an operator, you’re visiting 13 people, walking 20 booths, stopping at each for maybe 30 minutes,” adds Mike Brennan, Spielo’s product marketing manager. “This gives us a chance to give them hours on end—quality time with the customers. The customers get the attention they need, and they get to see our whole portfolio in a hands-on experience.”

The Spielo road show, as it’s called—the trailer contains representative games from each Spielo product line—will continue after G2E, but Brennan says the effort, organized by Baskerville, is a great supplement to the big trade show, which gives operators a chance to view the entire product lines represented in the mobile showroom.

It’s one more way Spielo is connecting with customers as the effort continues to integrate the company’s brand into the corporate structure of GTECH S.p.A., the gaming conglomerate that has absorbed the assets of former companies including slot-makers Spielo and Atronic, and Italian lottery operator/supplier Lottomatica. The parent company, based in Italy, changed its corporate name in June from Lottomatica to GTECH, the name of the Rhode Island-based lottery giant that was the most well-known of the predecessor companies worldwide.

For Spielo—which, according to Brennan, underwent a very successful brand change from Atronic to the identity of its Canadian sister company—a second brand change is in the offing as GTECH consolidates its numerous companies and their gaming specialties under one single, unified name. As a result, the company is introducing its new GTECH brand at G2E 2013.

For now, though, Spielo is fully engaged in getting the word out about the products it offers. Brennan says the financial strength of the GTECH corporate umbrella allows the freedom to grow market share through efforts like the road show, and through the collection of products for G2E 2013, which the company is touting the strongest showing of its product ever at the big trade show.

“We’ve integrated into GTECH, so we have aligned all our geographies to leverage our strength, size and infrastructure to lotteries, casino and the rest of our markets, as GTECH,” Brennan says. “This allows us to look at growing our market share responsibly like we’ve been doing—bank by bank, product line by product line.

“Our expectation is to increase our stature in the North American casino markets. We’re doing that by differentiating our products, and striving to be innovative, because it’s very crowded out there. It seems the shelf-life for many games has been decreasing with the increasing competition, so when we develop a product—especially a premium product—we want to ensure that it will last as long as possible, and that it’s got enough elements to stand out on the casino floor.”

Spielo will have standouts displayed at G2E in all of its game categories, but the product expected to lead the charge is a new version of a brand that has been with the company since the early days of predecessor Atronic Group in Austria—Sphinx.

Back in the 1990s, the original Sphinx game pioneered the use of 3D animation in slot machines, with a bonus journey through the inside of the Egyptian landmark. The new version, called “Sphinx 3D,” completes that original vision with 3D technology that is exactly what Brennan calls it: “some of the best glasses-free 3D anywhere.”

Sphinx 3D also constitutes the launch of Spielo’s next-generation cabinet, but the hallmark of the game is what’s inside that cabinet—beautiful artwork depicting the areas surrounding the Sphinx, and the interior of the Sphinx itself. The 3D effect enables the player to go on a journey toward, and then inside, the Sphinx.

Even the primary-game reel-spinning is in 3D, with the Sphinx and other symbols popping out at the player with an authenticity that invites them to be grabbed out of the air. Mystery wilds are accomplished by a box that flies out of the screen and then back to the reels to change symbols to wild. Even the “Easter eggs”—butterflies that fly out when the screen is touched—are in 3D.

There are five total bonus rounds—only one with the minimum wager; the others are unlocked as the wager goes up, with all five available at max-bet. It is one of several incentives to bet up that are built into the game.

The bonus rounds are masterful. The player is lost in a journey through an Egyptian town, or market, or neighborhood scene, to arrive at the Sphinx and go inside. In a nod to the original Sphinx, there are several bonus levels, with picks along the way that increase credits and unlock new chambers within the Sphinx.

The 3D effect never wavers throughout a long bonus round. (The bonus frequency is relatively low, enabling a longer bonus “journey.”) The effect doesn’t waver even if viewed from different angles.

The other showcase products for Spielo this year include a new version of the “Deal Or No Deal” series and a community-style version of the hit PopCap game “Bejeweled.”

The franchise of games based on the Deal Or No Deal game show has been a staple of the Spielo G2E lineup for years, the first based on the European version of the show, but more recent versions replicating the U.S. brand of the show, hosted by Howie Mandell—who has participated with video and voice-overs in the games.

The process repeats itself until the player accepts a deal or there is only one briefcase left. The offers get smaller or larger according to the value of the remaining prizes.

The gambling nature of this process has made the “Deal” games among the most popular in Spielo’s lineup. The newest version is called “Deal Or No Deal: In It To Win It.” According to Brennan, while the new game retains the basic bonus, it is clearly different than its predecessors.

“We wanted to make a clear distinction between this game and ‘Join ‘N Play,’ last year’s ‘Deal’ game,” Brennan says. “There is a new eligibility method, new wrinkles, a new aesthetic, and five bonuses—players get to play their own bonus.”

The presentation, though, is still in a community-style game on a giant LCD facing the games. The player chooses between two base games, titled “Howie” for the host and “The Ladies” for Mandell’s beautiful assistants on the show. Graphics and reel symbols change according to the choice.

The players qualify as “contestants” in the bonus with a small number of spins—the screen follows how many spins are left to qualify. “We strive to make the most player-friendly community-game eligibility requirements in the business,” Brennan says.

Once the Briefcase Bonus starts, this version of “Deal” awards up to five “Bonus Enhancers”—like a sneak peek at the contents of the briefcase or playing the entire bonus with two cases as your own—which players can use to formulate their strategy as more cases are opened. This element changes the nature of the bonus, prompting some to stay in longer and press the “No Deal” button more times.

Spielo also is launching a second game-show theme based on a license from Endemol, creators of Deal Or No Deal. It is a 100-reel game based on the game show 1 vs. 100. Its 100 individual reels each carry all symbols, and each is represented on the screen as a single symbol.

The new community version of “Bejeweled”—in the same community format as “In It to Win It”—is one of four new PopCap games to be launched at G2E.

It is the second group of games released under a license agreement with PopCap Games, owner of some of the most popular social games available on the internet. Last year, Spielo released slot games based on three PopCap titles known around the world—“Plants vs. Zombies,” “Zuma” and “Bejeweled.” The new games refresh all three of those titles with new games.

As always, Spielo arrives at G2E with a fresh collection of core games in all its categories, all refined using extensive player focus-group research. Among the best is “Treasure Blast,” which is being launched in Atlantic City. “This game scored higher than anything, ever, in our focus groups,” Brennan says.

The game’s central feature is a growing collection of wild symbols. During base-game play, whenever a rocket symbol lands on the reels, it shoots to explode several bomb symbols to transform them into wild symbols. Wild bomb symbols are collected during the base game for use in the free-spin bonus.

Other standouts in the core group include another Sphinx game—this time a five-line version of “Classic Sphinx,” designed for high denominations. It joins other games in the high-denomination category including “Secrets of Babylon,” a three-line, four-reel game, and the latest games in the Passion stepper series.

Notable in the latter category is “Deal Or No Deal: The Big Deal,” a three-reel, five-line dollar game in the Passion series inspired by last year’s “Join ‘N Play” version of the game. Players can bet one, three or five coins per line, in a classic “buy-a-feature” setup. Players go into a paired-down, shorter Briefcase Bonus with an average multiplier of 6X.

Other core games to head up Spielo’s collection include “Pyramid of the Sun,” which features bonus wheel symbols on adjacent reels which align to award a wheel bonus (“Everybody loves a wheel,” says Brennan); and “Jungle Riches,” featuring the patented “Trigger Tiles” bonus trigger system—when a bonus is triggered, the player selects one of the symbols for a credit amount he can take or risk for a higher or lower amount.

Spielo arrives at G2E with one of the most impressive collections of new games in its history. While operators can view all the games in one place at the trade show, the collection will no doubt provide more fuel for the slot-maker’s ongoing road show.

Clearly, this is a collection ready to go on the road.