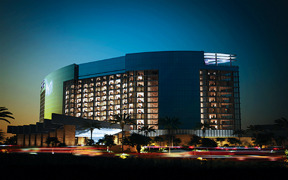 M Resort might be the newest casino in Las Vegas, but at its core are the old values that helped turn the city into the entertainment capital of the world.

The $1 billion casino has everything both local customers-the primary audience for M Resort-and out-of-town visitors could want. It features 92,000 square feet of gaming space with 1,800 gaming machines, 64 table games, a poker room and state-of-the-art race and sports book; a 390-room hotel; a 23,000-square-foot spa; 60,000 square feet of meeting space and nine different food and beverage outlets.

Located on Las Vegas Boulevard about 10 miles south of Mandalay Bay, everything at M Resort is designed to take advantage of the view of the Las Vegas skyline-even from the porte cochere on the south side of the building, you can see through the property to the Strip.

The view is a major part of the rooms at M Resort, particularly the flat suites and the loft suites, from which the 270-degree angle of view allows guests to take in the lights of the casinos as well as the surrounding mountains. Similarly, the majority of the restaurants-from Veloce Cibo on the top floor of the hotel tower to the coffee shop-are set up in a way to also take in the views, as does the pool area.

It is not only a return to the city’s traditions, but also a return to the family’s approach to running gaming properties. Tony Marnell II served as CEO and chairman of the board for Rio Hotel & Casino Inc. before it was acquired by Harrah’s. From the time it opened in 1990 until the acquisition nine years later, Rio developed a strong customer base among locals and tourists alike because of its unrelenting commitment to value and service.

Marnell hopes he can re-create that success by sticking to what worked before.

“We’re offering a lot of fantastic products here that the consumer is going to find enormous value in,” he says. “It’s what built a lot of loyalty to the Rio brand.

“We won’t make as much money as others who price their products differently, but we’ll make a good living and we’ll make our customers happy.”

The most important thing M Resorts brings to the table is a new approach-or perhaps more appropriately a revitalization of the old approach-which emphasizes customer service above all else. It is something that Marnell feels has been missing from Las Vegas for a number of years. It is something that got lost in the shuffle as the town experienced unparalleled success and it seemed there was an endless supply of customers and the casinos couldn’t do anything wrong.

A cursory look at the revenue figures from Las Vegas over the past couple months clearly shows that like every other industry, gaming is also not impervious to the fickle whims of the common consumers. That is not to say that the only reason that the industry is hurting is because customer service in Las Vegas is terrible. That is not the case at all. Las Vegas is still a world leader when it comes to servicing guests and customers, but the competition seems to be narrowing the gap as companies are forced to reduce staff to deal with the troubled economy.

“I don’t think there was as much emphasis placed on service as there should have been,” Marnell says. “Things were booming. Everybody was flush with cash and it really became a bidding war-not on the building site, how much can you spend and how big can you build it, but how much can you charge for it and who will pay the most.

“I think clearly that strategy is over with. That is not coming back for a long time.”

Marnell calls his approach high-touch and low-tech. In an age where almost everyone spends a majority of their time dealing with computers, they don’t want to have to use kiosks to cash tickets or use computer terminals to book rooms or make special room arrangements. Those options are available, but where some people have used this technology to replace the human component or to seriously augment it, that won’t be the case at M Resort.

“I’ve been a guest in some places and I had an issue and they say whatever the computer says is what you get. That’s not service, that’s not hospitality and that’s not the gaming business,” Marnell says.

Even little things like treating a valued customer to a free meal or a show is something that needs the personal touch. M Resort will have a player club-iMagine rewards club-through which guests can accumulate points that they can redeem for food or entertainment options, but that’s not as personal or as valued as the simple hand comp.

“I don’t know what happened to the hand comp in Las Vegas,” Marnell says. “The hand has got to come out the other way from the casino to show the customers we appreciate, recognize and value them. That is how we make our living; it is how our team members feed their families.”

The team members are a big part of Marnell’s plans for his new resort, and the distressed economy offered him the opportunity to find the best workers available. There were some 50,000 applicants for about 2,000 jobs (the property opened with 1,800 positions), which gave Marnell and his staff the opportunity to find employees who have the right attitude about taking care of the customers.

“The No. 1 thing to get a job at M Resort was how you approach and look at service,” he explains. “If you didn’t have the skills, but you had the ability to present yourself in the right way and you had the correct mindset that the customer was No. 1 and at all costs you must take care of the customer, then we made a position for you. If you weren’t qualified to do it, we trained you how to do it.

“It didn’t really matter where you were or what you’ve done, it was about your approach to service.”

Complementing the service approach is a focus on value. Price points at the restaurants top out around $50-that includes the 20-ounce rib eye-and drinks are priced in a similar manner, with nothing more expensive than $8.50.

“You can’t serve a 16-ounce steak for $70 anymore,” Marnell says. “It doesn’t matter who you are, when you walk out you feel ripped off. It happened on a regular basis because people could get that, but those days are gone. I think the days of the $15 martini are gone, too.”

He also notes that unlike some smaller restaurants in the area, the outlets at M Resort are at a considerable advantage in setting price point because the individual restaurants do not necessarily need to post a profit; it only matters that the overall property is profitable.

Anthony Layton Matthews, vice president of food and beverage at M Resort, explains that the approach to the dining options at M has evolved as the economy has worsened. The restaurants need to be comfortable for everyone who comes in, “whether it’s a lady and gentleman in a pair of shorts and a T-shirt or someone wearing a sports coat.”

“Our overall approach to food where we were a year ago is different than today,” Matthews says. “We’re getting back to the fundamentals of food. Charge what you need to charge, but don’t get too aggressive.”

Modest price points and outstanding views aren’t the only thing that makes the dining outlets at M Resort special. Whether a guest is looking for a steak-from the Marnell family ranch in Montana-or a quick sandwich, or even just something to drink, M Resort will have everything.

Located on the top floor of the M Resort hotel tower, Veloce Cibo and Bar Veloce are a primary focal point for the property. It is not only a place for dinner, but Marnell also sees it working as a lounge at night. Matthews describes the menu as “Asia meets Italy meets California.” It features everything from appetizers to sushi to steak.

“It’s difficult to get people from the casino floor to the rooftop for the first time, but I think once they go there once, they won’t want to go anywhere else,” Matthews says.

The Studio B buffet is another draw at the property. It is very likely the most entertaining buffet in Las Vegas, bringing a unique approach to this casino staple. It is a multifaceted area that features a live-action cooking studio as part of the attraction. (And, unlike some other buffets in town, beer and wine are included with meals at no additional cost.) The main dining area is also ringed with televisions showing what is happening in the studio kitchen. It has prompted some people who took tours well before the property opened to wonder whether the area was actually the sports book.

“The heart and soul and really the entertainment of the property is the Studio B buffet,” Matthews says.

There are a number of new approaches on the beverage side, too. A beer bar, 32 Draft, will have 96 beers on tap, and the idea is to run the beer through a cooler to get the temperature down to 32 degrees as it comes out of the head. It has a prime location next to the Vig Deli and the race and sports book.

M Resort also has a number of Enomatic Wine Serving Systems, which can dispense wine by the glass or even the ounce. These machines are available in the Hostile Grape wine bar, at Veloce Cibo, and via several portable units that can be brought into the convention space if requested.

On the casino floor there will be several self-serve soda dispensing machines. Rather than make people wait for a server to come around-not that it should be a long wait with the commitment to service-the idea is that guests can come in, grab a soft drink and proceed to their favorite machine. This will become increasingly attractive when summer temperatures set in.

“We are truly looking at F&B as an amenity to the casino and an amenity for the gaming customer,” Matthews says. “I think our commitment to keeping the food quality up and the costs down will give us a competitive edge to fill our restaurants better than our competitors.”