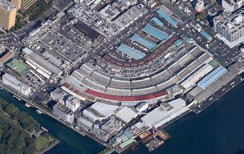 MGM Resorts International is considering central Tokyo’s Tsukiji market as a possible site for a destination resort if the government legalizes casinos.

It’s reported that CEO James Murren visited the district to survey the sprawling warren of fish stalls there on about 231,000 square meters of land the city may sell after its vendors relocate. It would be one of the largest parcels ever offered for redevelopment in the Japanese capital, and though its land costs would be higher, it’s gifted with an ideal location near the luxury shopping enclave of Ginza and readily accessible by mass transit.

CLSA analyst Jay Defibaugh said Tsukiji could be an alternative to the Odaiba district that is seen as the top contender for a gaming resort even though land prices in the Tsukiji area cost about JPY1.39 million per square meter (US$13,400), while the cost of property in Odaiba, on reclaimed land in Tokyo Bay, is about JPY956,000 per square meter ($9,200), according to the land ministry.

“Tsukiji, in terms of accessibility, is almost unrivaled in Tokyo,” Defibaugh said, and even with the higher costs, casino operators would find the site “very appealing.

The fish market draws 42,000 visitors daily, many of whom come to see the early morning auctions where JPY420 billion worth of seafood, including some of the world’s most expensive tuna, is sold each year. The eating stalls around the almost 80-year-old covered market are popular destinations for freshly caught sushi breakfasts.

The Tokyo government decided in 2001 to relocate the market from Tsukiji to a less cramped facility being built on reclaimed land in Tokyo Bay about four kilometers away. The move has been delayed in part because of toxic soil that needs to be removed from the new site.