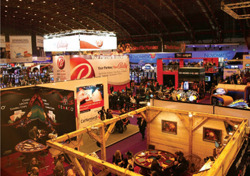 An estimated 20,000 attendees spent the last week of January at ICE Totally Gaming, the central trade show for the European casino industry. More than 400 exhibits displayed a complete range of casino technology from vendors representing a record 54 countries at the show, which originated a decade ago as the International Casino Exhibition.

In addition to the trade exhibits, a conference program featured topics ranging from the state of the industry in various gaming centers to the emerging world of online gaming.

After Weinert’s presentation, Caesars Entertainment Senior Vice President Jan Jones commented on New Jersey’s legislation that would create intrastate online gaming, in which she presented Caesars’ position that a federal online gaming bill in the U.S. would be preferable to state-by-state internet legislation, which she called “dangerous.”

The world of  i-gaming also was a major part of the ICE trade show, with a larger section than any previous year devoted to vendors selling online gaming software and systems. Interest was high among vendors in the prospects for gaming legalization in the U.S., and how to get their message out to the U.S. land-based casinos.

I-gaming technology providers such as Playtech, Microgaming, Dragonfish, Continent8 and others demonstrated a wide range of products, content and service. Other i-gaming suppliers, including companies such as Spiral Solutions, Mazooma Interactive Games and IGT subsidiary WagerWorks, demonstrated a wide range of online games and i-gaming solutions. Euro Games Technology, the Bulgaria-based supplier of slots for land-based casinos, demonstrated “Win Again,” a system that provides a bridge between land-based casinos and online games by streaming real-time video of live table games to remote devices such as an Apple iPad.

The traditional suppliers were well-represented at ICE as well, with Austria’s Novomatic Industries opening the trade show by unveiling a redesigned space-age stand that dominated the floor. Novomatic’s Austrian Gaming Industries subsidiary launched 14 new titles in its Coolfire II line of video slots, as well as new jackpot systems in the line of new subsidiary Octavian International.

AGI Managing Director Jens Halle said the manufacturer, which is one of the dominant suppliers in Europe, is committed to remaining with the ICE show and Earls Court for at least the next two years, providing the venue remains open. (There is pressure to close the Earls Court convention center to free up its prime central London real estate.)

Other highlights of the trade show:

• Casino Technology announced that this year the company will release several licensed titles, among which will feature Penthouse-branded products, reflecting the popular magazine’s images. Sonia Nikolova, managing director of the company, said that the first Penthouse video slots in the new series will be introduced later this year. Casino Technology also displayed “7 Wonders,” a new four-level progressive video slot that uses five 40-inch LCD panels as a gigantic reel set for the mystery networked bonus event, and a multimedia feature that allows the player to use headphones to listen to music, access the internet or get e-mail, without leaving the slot machine.

• Interblock displayed its “Organic Island” (above), a cluster of automated, electro-mechanical versions of craps, sic bo, baccarat and roulette, all linked to electronic player stations. Players can use the stations to instantly switch among any of the four games. The manufacturer is offering the games to jurisdictions around the world—including venues where live table games are offered, as a slightly lower-cost entry and less-intimidating introduction to table games.

• WMS Gaming launched 80 titles new to Europe, including “Ultra Hit Progressive,” “The Godfather,” “Mega Multiplier” and “Alice and the Enchanted Mirror,” a Transmissive Reels hybrid reel/video slot with a dimensional top box used for an entertaining bonus round, all based on the literary classic Alice’s Adventures in Wonderland. A companion in the series is “Alice and the Mad Tea Party.”

• Table game supplier TCSJohnHuxley launched several new products at ICE, including a flexible display panel that adds color and animation to any static surface; new modules for its table-game management system allowing for the optical reading of cards as they are dealt from the shoe; and “Double Action Roulette,” a unique version of roulette featuring two concentric wheels. In this game, there are two number results for every spin on the wheel, and a variety of side bets. Players can bet on the 1,200-to-1 longshot of the same two numbers landing, a safer 3-to-1 on the colors matching, and other unique propositions. A new betting layout allows wagers on up to seven numbers with the same chip.

• Aristocrat Technologies reprised its entire G2E collection of new game launches at ICE in what Global Marketing VP Doug Fallon called a “mini-G2E.” Among the highlights were “Win Your Way,” a groundbreaking game that allows the player to choose the volatility of the game by selecting from two pay tables; “Stuntman Sam,” the comic video slot featuring a hapless cartoon stunt man; and “More Chilli” and “More Hearts,” companion games with free-spin bonus rounds in which certain symbols increase the reel sets to a maximum of four, all spinning at the same time.

• Bally Technologies displayed a complete range of new slots in its Alpha 2 platform, as well as the technological innovations first launched at last fall’s Global Gaming Expo, such as the iDECK LCD button panel, which doubles as a third video screen; and its “Networked Floor of the Future” server-based gaming applications.

• International Game Technology demonstrated products in all of its game categories. One highlight was a new game called “Wipeout,” a 10-line video slot featuring a unique free-spin round. A new Star Trek series was launched and the popular Star Wars games were updated.

• Ainsworth Game Technologies, Konami Gaming and Atronic all reprised their new game collections first launched at the G2E show. Highlights included Konami’s “Advantage Revolution” platform in the Podium series; the new “GamePlus” series of video slots and advanced A560 range of cabinets from Ainsworth; and the latest “Deal Or No Deal” community-style game from Atronic.