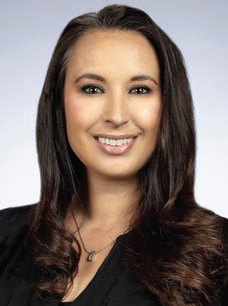 Softball and mathematics played a major role in Jamie Knight’s education, a role that brought her into the world of gaming. She parlayed her skill at softball into a full-ride scholarship to play at Illinois State University, majoring in math.

“I believe playing softball and serving as team captain trained me to be a great team player, lead and push my teams to be the best. There is nothing more important than an effective team full of passionate people all driving towards the same goal,” she says.

After graduation, Knight landed a position as a marketing manager in California. But her online resume attracted interest from Atronic, seeking a mathematician.

“I knew very little about gaming at the time, but I worked with some of the best in the industry and learned and grew quickly,” says Knight, now senior game producer with Scientific Games. “Gaming is fascinating, and the longer I’m in it, the more I know that I chose the right career path.”

From Atronic, Knight went to Design Works Gaming, where she helped run the math and marketing department. Then it was on to Bally Technologies as a mathematician.

“After about a year in that role, I was promoted to game producer, which enabled me to blend my experience designing math models for games with my passion for creativity and marketing. It was the perfect position that drew on my range of abilities from both the technical and creative sides.”

“I oversee studios that include artists, animators and engineers. I work with the artist to concept a new idea. Sometimes these ideas start with an art direction and some are inspired by a game mechanic. I work closely with a mathematician to perfect the experience. Either way, the art and math need to complement each other to be successful.”

The orchestration of the process is important to ensure the player understands the game, she adds.

To get to this level, Knight had the mentorship of John Vallejo, who is the vice president of game development at Scientific Games. “He is amazing. He has taught me by example how to be a good manager and how to have a successful team that is passionate about their work and who feel appreciated.”

To Knight, Scientific Games is in a unique position to evolve and create a full entertainment experience for the player.

“We’re developing games players love, using innovations to provide an engaging experience. We will continue to innovate our product lines to provide value for the player, who ultimately decides our success,” says Knight, who coaches baseball for one of her two sons’ teams; both boys are into sports in a big way.

With her side of the industry in a growth pattern, Knight has some wisdom for new blood.

“Be fearless. Be confident in yourself. Lead by example and be kind to people. Teams do not want to follow those who bark commands, but those who appreciate their hard work and give constructive feedback. Bad news does not get better with age, and don’t be afraid to have those difficult conversations.”