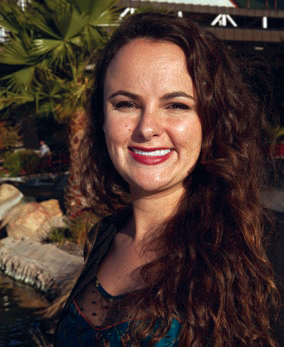 Cary Conrady has always been a “non-traditional” marketer. She recalls one story early in her career which hinted at her independent and “outsider” approach. During her college years at Cal Poly, San Luis Obispo, Conrady’s blogging skills landed her a job as an intern at an award-winning marketing firm. Conrady recalls one client in particular who was spending thousands of dollars on traditional print ads in magazines.

Considering their target audience and how niche the product was, Cary convinced the client and the marketing firm to move all the ad dollars into “non-traditional advertising,” which at the time included the newly launched ads on Facebook, Google AdWords and other SEO tactics to drive potential clients to the website.

Conrady’s supervisors, who came from BBDO and Ogilvy, had strong traditional marketing backgrounds and taught her all they knew about marketing and consumer psychology. Online advertising was not the norm for them, but they took a big chance on letting Conrady run the campaign. The student became the teacher, as the result was a 600 percent increase in sales. The client literally could not produce enough product to keep up with the demand, and Conrady had to pause the ad campaign.

Conrady’s success using online and social media marketing for many of the firm’s clients led to her being offered a job as part-time instructor at Cuesta Community College in San Luis Obispo, at the age of 26, making her the youngest instructor the institution had hired to date.

In the two short years Conrady has been at Pechanga Resort and Casino in Temecula, California, she has helped increase the resort’s Facebook traffic from fewer than 60,000 fans to almost 300,000 fans. She has helped build Instagram and YouTube followings as well. With the help of the operator’s video team, Pechanga had a YouTube video for the new “Plants vs. Zombies” slot machine reach over 7.4 million views this year—setting the record of most-watched YouTube video ever in the casino industry.

“I think Pechanga’s emphasis and support for social media sets them apart in the industry, and it is why we have seen such great results. My success is the direct result of Pechanga’s emphasis on staying ahead of the curve and investing in new media,” says Conrady.

These successes earned Conrady the American Gaming Association’s Communications Awards for Social Media and a “Best in Show” Sherpie Award at this year’s G2E.

“When I started my career, online and social media marketing were definitely considered ‘non-traditional’ marketing, and in the casino industry they still are,” she says. “It’s only a matter of time before online and social media marketing are the norm or ‘traditional’ marketing. And with new and exciting iGaming opportunities in the future of casinos, it’s never been a better time to be a social media strategist at a casino, in my opinion. I love what I do and I’m looking forward to blazing a trail.”