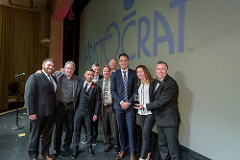 The awards—immediately dubbed the “Slotties” by the first winners—covered 21 individual categories of games in the slot sector, with the winners determined by votes from more than 100 slot operations officials from over 300 casinos across the U.S., who collectively operate around 300,0000 slot machines. A panel of social gaming experts determined the voting on social casino games.

The big suppliers led the way in the voting, with Aristocrat Technologies capturing seven top awards. Scientific Games took five awards, with IGT the only other supplier scoring multiple awards with three.

In addition to the individual game awards, the EKG judges kicked off the EKG Slot Awards Hall of Fame by inducting Joe Kaminkow as the inaugural member. Kaminkow was the longtime slot development VP at IGT, and was responsible for some of the biggest hits in the slot sector before leaving for his current twin roles as a game developer for Aristocrat and for Zynga, the online and social games leader.

Kaminkow’s roots were in the amusement game industry, with Williams Electronics beginning in the early 1980s. He co-founded Data East Pinball in 1986, and produced pinball games including RoboCop, Back to the Future and The Simpsons. He moved to IGT in 1999, where he oversaw the rollout of iconic games including Wheel Of Fortune, The Price Is Right, Sex and the City and many others before returning to the amusement sector with the creation of Spooky Cool Labs.

“It was a great night celebrating excellence in the slot sector, with approximately 200 executives in attendance from all the major gaming equipment suppliers, as well as several of the industry’s largest casino operators and key media representatives,” said Eilers, according to CDC Gaming Reports.