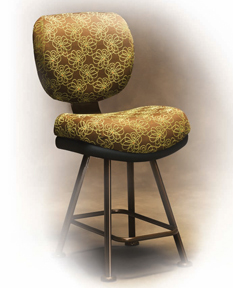 Ergonomics has become more than a flashy buzzword.

Ergonomics even sounded good. It implied sophistication, political correctness and a cutting-edge philosophy that went outside the box. Ergonomics was for winners.

Then came gaming, propelling the term to a new dimension. Gone was the eight-hour office day, replaced by a 24-hour, multibillion-dollar industry.

Customers brought insatiable gambling appetites and varied body shapes to marathon gaming sprees. They could play almost forever in the right conditions. Comfort was no longer about workmen’s comp. It was about comps. And player’s clubs, loyalty, etc.

Comfort became the financial Bible to chair companies. A chair can determine how long a customer plays at a particular location. If a patron leaves because of back pain, the company receives the financial headache of lost revenue. This drives manufacturing workshops to produce the perfect chair, and then improve upon it. Durability is paramount now that the product is being used three times as much as its office-world counterparts.

The companies face a difficult task, however. Unlike suppliers who produce printers, tracking systems or cash access, they can’t connect a chair with revenue gained. There are no statistics to promise better use of employee resources or time on machine. By the time someone realizes a chair is ineffective, it has caused revenue lost.

For chair manufacturers, the agenda is clear: Make the next product better than the last. Please the casinos, whose customers are, literally, sitting on the bottom line. And realize that ergonomics is economics spelled differently.

Gasser Chair Company reaps the reward of a powerful connection.

The Youngstown, Ohio company, formed in 1946, initially specialized in kitchen tables and chairs. That changed in the 1950s after one of its founders, George Gasser, forged a relationship with gaming magnate Bill Harrah. Gasser convinced Harrah that stools in front of slot machines would enable customers to play longer.

The period is viewed as nostalgic by company officials. They recall Gasser, a young entrepreneur, making a sales call at Harvey’s Casino in Lake Tahoe. Gasser had noticed that several gamblers were taking stools from the bar over to the slot machines in order to sit while playing. He saw that players who had seats would stay longer on the machines.

Armed with this knowledge, Gasser returned to Youngstown and built one of the casino industry’s first slot stools. It was a simple round seat and basic four-leg frame with a foot rest. The innovation became Gasser model 218.

And since then, the hits have just kept coming. The evolution encompasses various shapes, models, seat widths, specific applications of foam and ever-increasing durability. As the casino industry took off, unveiling properties from Atlantic City to Connecticut, Mississippi to California, Gasser accompanied the move. Indian gaming emerged, bringing varied sizes of properties to service.

Gasser’s vision, coupled with the eventual Harrah’s gaming boom, propelled this company into a prominent position.

In addition to the U.S., Gasser has a presence in Australia, Europe and the Caribbean along with product on board many cruise lines. The company product line has grown to include table-game seating along with poker, keno and bingo chairs.

“The chair has to provide support, especially because players may be seated for long periods of time,” says Roger Gasser, the company’s sales development manager. “It is not just the softness when they sit down, because that can go away quickly. Your support has to be such that the tail bone doesn’t go sore, the legs don’t go numb. We are unique in that we mold our own foam. We handle all the engineering and manufacturing. We can take customer ideas and sketches and turn them into reality. When you sit in a Gasser chair, it encompasses you. You feel secure in it.”

In 2012 Gasser Chair introduced the innovative Coltrane slot stool, which was well received. In 2013 at G2E, Gasser introduced the Coltrane table game stool. This led to numerous requests from table game managers for a narrower version of the stool to maximize player usage at each table.

Gasser responded with the development of two table game versions with seats that are 1.5 inches and 3.5 inches narrower than the slot stool, while maintaining the same level of comfort, Gasser says.

The Coltrane also utilizes an aluminum back plate and four-leg frame that makes it approximately 20 percent lighter than similar products of competitors, Gasser says. An optional hand pull accompanies the Coltrane, making it easy for operators to pull the unit away from the machine when necessary. It also is easy to service, Gasser asserts.

“Four bolts and you can change a seat top,” he says. “If you have a cigarette burn, for example, you will have easy maintenance to fix it.”

MLP Seating, based near Chicago, has a 64-year tradition of serving the gaming and non-gaming worlds. Outside of the casino market, it services restaurants, offices and companies involved in health care.

For casinos, it has hundreds of chair models designed to meet two important challenges: the size of customers and the height of slot machines. Company officials know it must ergonomically adapt to the casino marketplace.

“You want to keep the screen at eye level,” says Ron Shaw, the national sales manager for MLP. “No matter how well-constructed a chair is, you and I are a different size than someone else. The casino wants it all to look the same, so as long as we know what height the screen will be at, we can adjust accordingly. We will morph our product to better fit those new machines, but at the same time, there are still thousands upon thousands of screens that still have traditional heights.”

Back support can be manufactured subtly. Elements can include the seat’s ability to recline to a player’s posture. But the result is anything but subtle—it has to feel right.

“The belief that has been out there is that there is no other product that impacts the customer experience more than the seating,” Shaw says. “The more comfortable customers are, the longer they will play. Our goal is to provide the most comfortable product the casino can give its customers. That is why we customize our chair to whatever you want. You tell us what you want and we will create that for you.”

The company product line includes casino and gaming slot stools, poker, bingo and keno chairs. The chairs for casino gaming include options like a flexible back. There is also a bucket-seat model.

When all of that is hammered out, MLP builds a model and sends it to the potential customer. If the property is satisfied, a large order of perhaps 1,000 chairs will ensue. Should the customer want alterations, they will be made and re-sent to the buyer. Once the perfect chair has been agreed upon, the order moves forward.

“We listen intently to our customers,” he adds. “We don’t just say ‘this is the frame. It comes in black. You’re gonna want black.’ Whatever you need, we can make that for you.”

Durability has its benefits, he says. Shaw indicates that some customers are replacing entire seats but maintaining the frame, which has held up for several years. The metal frames are hand-welded and have extra braces to ensure durability.

The company supplies IGT, Bally, Aristocrat, WMS and Konami stools for their participation games and thus has a presence in most North American casinos. In 2000, the company engineered a chair for San Diego’s Barona Casino that introduced state-of-the-art ergonomics to gaming, according to Skip Davis, the company’s president. That design became the basis for Platt’s X-Tended Play series of seating and propelled the gaming world into ergonomics, he says, adding that the company is the only casino seating supplier that focuses exclusively on the gaming market.

Within that gaming specialization realm, ergonomics has become increasingly significant.

“We have hired a full-time ergonomic engineer who has been designing seating products in related industries for the last 30 years,” Davis says. “He has been involved in many of our product designs in the past as a consultant. He is now on board full-time, and we are very excited about our new product development plans.

“We have several chairs in development that are being designed specifically for customer projects. All of them incorporate our X-Tended Play ergonomics and comfort but have unique styles. In addition, they will have sneak previews of some of the components of our second-generation X-Tended Play seats scheduled to be introduced later this year.

“This is an area of emphasis for our company now that we have full custom design capabilities. In addition to the custom designs, he is also involved with our engineers in creating additional interactive chairs for two new customers with 2014 introduction dates. This is an extension of the interactive chairs designed and developed for IGT, Bally, Aristocrat and Spielo.”

The rollout will be a significant one, he asserts.

“We will begin designing the next generation of the X-Tended Play series later this year with some really exciting features that will change the industry,” Davis says. “We have had most of the popular models in our current X-Tended Play line for over 10 years now. They continue to be very popular. Our Gazelle model is by far the most frequently specified chair in the market. Over the years, all of our competitors have created their version of the chair out of necessity, so we decided it was time to raise the bar again.”

The key success ingredient, he says, is knowing what to concentrate on and what to leave to others.

“One of the models we follow to remain competitive and flexible is to concentrate our manufacturing expertise in the areas were we have the most value added,” he asserts. “That means we have deliberately avoided vertical integration. We leave things like injection molding, aluminum extrusion, powder coating and plating, and anodizing to vendors who do this for a living. We provide the designs and drawings and they produce to our specifications.

“It allows us to establish and maintain key vendor relationships with dual sources and allows us to focus on our core business, which is making chairs. It also allows us to avoid heavy capital investments in processes that need to be run continuously to be cost-effective. This has proven to be a vital competitive advantage.”

The other business principle that we have stuck to is to focus only on the casino industry. All of our seats are going to games on the casino floor, so we pay attention to one industry only.”

It all goes back to the philosophy followed by all the industry’s chair manufacturers: Keep them seated; keep them playing.