The outbreak of the Coronavirus has had a major impact on the gaming industry. With this in mind, GGB is committed to providing updated news and analysis on our weekly news site, GGBNews.com.
DATELINE TRIBAL

Foxwoods on brink of default 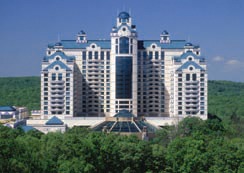 The combination of increased gaming competition, the reluctance of consumers to spend, and the burden of debt covenants that were signed when the economy was in better shape means the Mashantucket Pequot tribe of Connecticut may default on some interest payments.

Standard & Poor’s last month lowered its rating for the tribe, which reportedly has been selling off land near its reservation in the southeastern part of the Constitution State. And the tribe has begun discussions with senior lenders over what it calls “failure to comply with certain financial covenants” related to the mammoth Foxwoods Casino Resort, the Associated Press reported.

In 2007, Foxwoods and Connecticut’s second tribal casino, Mohegan Sun, added $430 million in combined revenue to state coffers, just 25 percent of their overall slot machine take, the Connecticut Post reported. But competition from racinos in New York state, casinos and slots in Rhode Island, and a recessionary economy have put an end to the gravy train. In fiscal 2014, Connecticut received just $279 million in combined casino revenue, a drop of more than one-third in less than seven years.

State Senator Toni Boucher is alarmed by the steep decline. “The state has been reliant on this,” Boucher said. “This is a real problem and it’s heading for a train wreck.”

The competition will only grow as New York plans its first of seven commercial casinos and Massachusetts plans three of its own. New Jersey, which once held a monopoly on gaming on the East Coast, has suffered most from the impact of an all-but-saturated market. It has closed three casinos this year, including the giant Revel, which operated only two years, and a fourth was set to close in September.

“Connecticut should get used to the current casino revenue levels,” warned Peter Gioia, an economist with the Connecticut Business and Industry Association. “If anyone is planning on an increase, that’s a risky move.”

Mitchell Etess, chairman and CEO of Mohegan Sun, blamed the economic climate as much as competition. “People are not comfortable with the economy,” he said. “This is truly disposable and recreational income.”