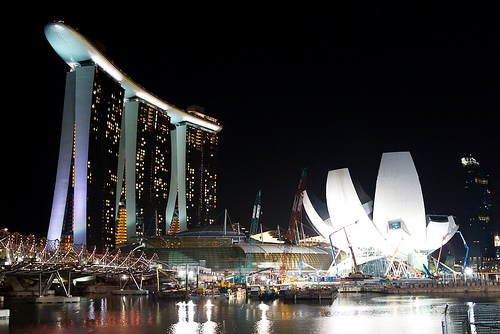 Predictions that Singapore’s two casinos will outperform all the casinos on the Las Vegas Strip by 2012 has brought renewed attention to the projects that have transformed the city-state’s economy. Since the Strip generated nearly billion in revenues in the last 12 months ending in July, getting similar numbers out of just two casinos is nothing short of stunning.

The opening of Marina Bay Sands, an integrated resort owned by Las Vegas Sands, demonstrates the power of the draw. More than 5 million people have visited the property since it opened last April and almost 300,000 have ascended to the 57th floor viewing deck to get the best view of the Singapore skyline. By the end of the year, when the full scope of the property will be open, the company expects between 70,000 and 80,000 visitors a day to Marina Bay Sands.

For Singapore, the goal of increasing tourism by adding the casinos seems to have worked. In August, visitation to the island nation increased for the ninth consecutive month. Arrivals are expected to reach 12.5 million in 2010, compared to only 9.7 million last year. The goal of 17 million leaving more than S$30 billion by 2015 seems to be more than reasonable.

The casinos have also spurred development. Several new luxury hotels have been announced in the past few months, including a W Hotel, a brand of the Starwood hotels, near the Sentosa casino. A financial, residential, office and retail project is now under way near Marina Bay Sands.

Meanwhile, local media reports that one of the richest men in Singapore is on a losing streak, dropping at least S$100 million (US$75 million) at the island’s two casinos. Today magazine said a lumber tycoon from Malaysia also lost S$50 million. Despite the huge numbers, the magazine points out the losses are just a small fraction of the wealth of the two individuals.

Bill Lerner of Union Gaming Group in Las Vegas said in a note to investors that the hold for each of the casino should have been substantial.

“Working through the numbers a bit more would suggest about US$86 million in net revenue for the two properties combined,” he said. “When considering a likely rebate on initial check-in amount, as well as forgiveness of a portion of losses, which we think combined could approximate 25 percent, net revenue to the casinos was likely about S$112.5 million , or US$86.1 million.”