Gaming stocks have taken a beating, but that indicates potential value

It’s no secret that gaming stocks have taken their fair share of punishment across the board, but that also unearths loads of potential value. Multiple financial analysts have highlighted reasons why the sector might be oversold—the biggest question that remains, then, is whether you prefer traditional, asset-heavy companies or ultra-light, digitally focused ones.

The financial structure of many casino companies has changed dramatically in recent years. Where most were 100 percent property owners before, many now are rent-paying tenants. Where their businesses were purely brick-and-mortar, many now include digital components offering online casino and sports betting.

These changes have prompted sell-side analyst Carlo Santarelli of Deutsche Bank to suggest that the conventional method of valuing companies by multiples of EBITDA (or EBITDAR for the rent payers) might not work as well today.

Valuing companies based on free cash flow may be better, he says. In a special research note on the topic, Santarelli did a detailed analysis based on a number of historical statistical assumptions and norms to arrive at that conclusion.

Based on his analysis, companies that own their real estate and are not involved in digital gaming appear undervalued by the market—Red Rock Resorts with potential 56.8 percent upside and Golden Entertainment with 52.6 percent. Boyd Gaming, which is primarily its own landowner, had a 72.9 percent appreciation potential to reach its implied value as of the time of his analysis in June.

On the other side, Penn National and MGM Resorts, which have gone farthest along the asset-light model and into digital, he calculated as trading well above historical norms.

Looked at another way, Santarelli calculates that those on the so-called OpCo model convert 25 percent of adjusted property EBITDAR into free cash flow, while those he calls WholeCo convert 45 percent.

Obviously, there are a lot of factors that go into how companies will grow value over time, but Santarelli offers an interesting analysis for investors to consider when trying to value today’s mixed model companies.

Down, but Not Out

Meanwhile, gamers have sold off along with other consumer discretionary stocks as investors worry about the erosive effects of inflation and a possible looming recession. Yet, the question must be asked whether gaming stocks have sold off enough; maybe it’s time to start looking past a recession to more normalized times, thus higher earnings and stock prices.

That brings us to two recent analyst reports in which Dave Bain of B. Riley and Chad Beynon of Macquarie lowered their targets on gaming stocks but largely maintained their positive ratings.

Bain and Beynon are interesting analysts—they are not conformists and frequently step out in high-profile calls, being unafraid to stand out from the crowd. They also have proven track records of frequently being right.

In lowering his targets, Bain cited current market conditions and risks. But he argued that stocks are way oversold, with almost every name he covers selling well below historical enterprise value-to-EBITDA and well above what might be expected, even in recession.

To take the most extreme examples, Bain says current valuations imply EBITDA reductions next year of 55 percent for Light & Wonder, 49 percent for NeoGames, 47 percent for Century Casinos, 46 percent for AGS and 31 percent for Golden Entertainment.

Only one company, Penn National, is selling at higher than its historic level, but just barely at 10 times 2023 forecasted EBITDA versus the historic norm of 9.9 times.

Even companies on which Bain lowered targets have considerable upside based on current prices: 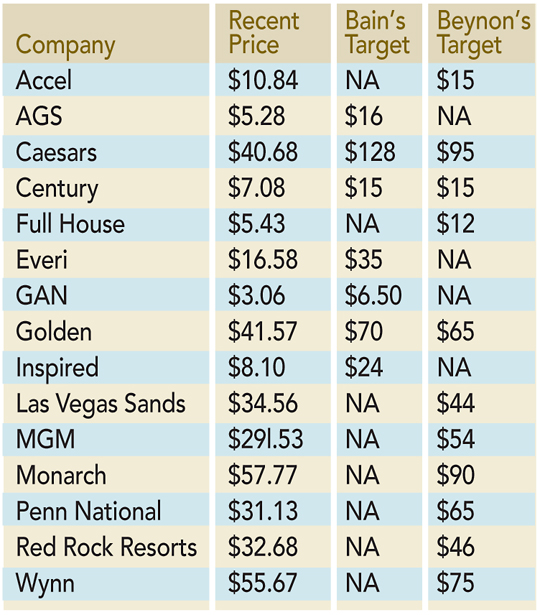 In addition to low valuations, Bain also sees many company-specific strengths for the companies above that he still rates as buys. By nature, Bain is an upbeat, optimistic guy. But natural bullishness aside, he makes a good case that gaming stocks are way oversold.

In his research note, Beynon compared margins and multiples of valuation to those of the global financial crisis of 2008-09. During that period, margins declined 20 percent and commercial casino revenues fell 8 percent peak to trough.

With recent regional gaming EBITDA margins around 10 percent higher today, a similar contraction would result in higher margins than before the financial crisis. Yet, gaming stocks are down 35 percent and multiples of EBITDA are down from 11 to eight times, Beynon notes.

In other words, gaming stocks have been beaten down and might show resilience from here. The simplest presentation is in the table above. If Bain and Beynon are even close to right, it is clear that many gaming stocks can return 50 percent and 100 percent and higher.

As such, now might be a time to do your own due diligence to find your best values, and then dive in.