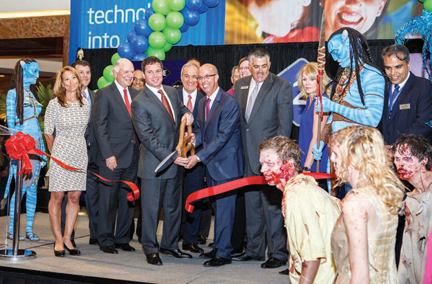 Each year, the annual Global Gaming Expo takes the pulse of the worldwide gaming industry. From the operators who attend to the suppliers who exhibit and the thousands of affiliated attendees, G2E is the one trade show that represents all facets of the gaming world.

And if G2E 2013 is any indication, the pulse is strong, healthy and growing. With at least 25,000 people in attendance (G2E officials say official audited results will be released in a few months), and an exhibit floor more than 10 percent larger than last year, G2E was an active and busy place at the Sands Expo Center in Las Vegas last month. More importantly, a strong selection of exhibitors testified that the quality of attendance, the ongoing traffic and the deals signed on the floor meant this year’s G2E was the best in years.

This year’s G2E was also the first for American Gaming Association President Geoff Freeman. With former AGA CEO Frank Fahrenkopf also attending the show in his consultant role following his retirement, Freeman addressed the media in a briefing on the morning the show opened. He declared himself impressed with the size and scope of G2E and went on to address many of the issues that currently confront the casino industry.

On the exhibit floor, as always, the focus was on the games.

All of the top manufacturers launched compelling games—many in spectacular fashion—but one of the surprise hits of the trade show carried no movieland brand or celebrity endorser. What many attendees called the hit of the show was “Sphinx 3D,” from the newly rebranded GTECH.

While Sphinx 3D was the talk of the show in some circles, in others, the talk centered on Batman. That’s the classic Batman TV series and its star, Adam West, who was on hand at the Aristocrat Technologies booth to sign autographs.

Aristocrat’s booth featured the first games designed for the manufacturer by new Senior VP of Game Development Joe Kaminkow, and among the first is “Batman: Classic TV Series,” based on the campy 1960s TV series starring West as the Caped Crusader. The game mines the TV show for its most memorable moments, including celebration clips of Batman doing the hilarious “Batusi” dance created for the show.

Entertainment also was at the center of the lineup of new games displayed by Bally Technologies, highlighted by the world’s most famous magician and two icons of the rock music world, Michael Jackson and ZZ Top.

World-renowned illusionist David Copperfield appeared at the Bally booth to promote “The Magic of David Copperfield,” a game using the king-sized V22/42 cabinet to recreate some of Copperfield’s most famous illusions in high-definition video, in several bonus events.

The big news of the show for Konami Gaming was the launch of several new game styles, with the new “Titan 360” amusement-style slot bank dominating one side of the slot-maker’s booth. Placed at Harrah’s Resort in Atlantic City earlier this year as a “limited-release” product, Titan 360 incorporates a circular bank of slot games surrounding a giant amusement-style, moving bonus display encased in Plexiglas.

IGT recreated a hit film from another era in “Back to the Future,” based on the popular 1980s time-travel trilogy. The movie’s stars, Michael J. Fox, Christopher Lloyd and Thomas F. Wilson, all contributed voice-overs for bonus rounds covering all three “eras” depicted in the film.

WMS Gaming’s G2E lineup was highlighted by “Ferris Beuller’s Day Off,” a spot-on reproduction of the best moments of the iconic 1980s film; and “Beetlejuice,” based on another memorable ’80s movie.

Other WMS game standouts included “Iron Man,” in which footage from the main scenes of that film, starring Robert Downey Jr., are woven into bonus rounds; and “Clue,” the second WMS game based on the famous whodunnit board game, on the Gamefield xD cabinet.

• Cadillac Jack featured “Dragon’s Lair,” based on the famous video arcade game of the same name, launched on the occasion of the arcade game’s 30th anniversary.

• Incredible Technologies launched “King of Bling Iced Out,” the follow-up to one of its most successful slot games; and “Car Nation,” an innovative game design with horizontally spinning reels cleverly creating a journey through different towns.

• Multimedia Games introduced a host of new video slots, highlighted by “Zombie Outbreak” and its clever “first-person shooter” bonus event. Multimedia also hosted the finals of its first “National TournEvent of Champions,” the signature event for its instant tournament system, at the Palazzo’s Lagasse Stadium.

• Aruze Gaming America celebrated its 30th anniversary year (dating back to its days as Universal) with games like the interactive “Sinbad” two-player game, and the “500 Series” of video slots featuring up to 500 free games.