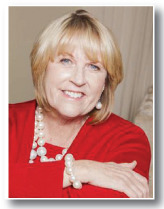 Every once in a while, nearly everybody likes to let down their hair and kick up their heels, particularly in an industry as intense as gaming. But Kick Up Your Heels takes on a whole new meaning in conjunction with Global Gaming Women—it is the fundraising event that just last year raised 0,000 for scholarship programs for emerging leaders in the gaming industry.

I am honored this year to be asked to chair such a prestigious event, and to work with the Global Gaming Women (GGW) board of directors to raise funds for such an important mission.

In 2010, Patricia Becker, former gaming regulator, industry leader and International Gaming Institute (IGI) executive director, created Kick Up Your Heels as a fundraiser for the IGI at the University of Nevada, Las Vegas. This event, held on the Wednesday evening during the Global Gaming Expo conference, was an enormous success.

In addition to raising funds, the invited women executives benefited from a high-level networking opportunity, and it became clear that there was a demand for similar events in the future.

In 2011, the American Gaming Association launched GGW, and Kick Up Your Heels became a GGW mainstay, raising funds for education for women in gaming. Becker continued to coordinate the event, now with the assistance of the GGW Education Committee.

Funds raised accrued to the Charitable Education Fund, and numerous women from across the country were awarded scholarships to programs designed to enhance their business skills and careers. While GGW is now an independent organization, it continues to receive the support of the gaming industry’s leading companies, which recognize the invaluable benefits of its mission to support, inspire and influence the development of women in gaming.

The GGW Education Committee is co-chaired by Becker and Phyllis Gilland, senior vice president and general counsel at American Casino & Entertainment Properties. Under their leadership, the educational offerings in 2016 have expanded into an educational pyramid of programs offering tiered classes throughout the United States with customized sessions targeted to women at all levels in gaming who seek to advance their careers.

These programs are offered free of charge to the women who attend and their companies—they are only expected to pay travel and personal expenses. Since the geographical expansion of the programs significantly increases the number of women who can participate in the classes, it is more important than ever to raise funding for additional scholarships.

Kick Up Your Heels 2016 will be held on Wednesday, September 28, from 6 p.m. to 8 p.m. For the first time in the history of the event, it will be held at the Cosmopolitan of Las Vegas’ Boulevard Pool.

“The Cosmopolitan is excited to host such an esteemed group of women,” remarked Cosmopolitan of Las Vegas Chief Financial Officer Chelle Adams. “It’s great to be able to honor the industry’s best and brightest while fostering support for the next generation of leaders.”

Also for the first time in the history of the event, this year will be the inaugural award ceremony honoring women who have a demonstrated a history of helping to advance the careers of other women in gaming. The award is a specially designed bracelet that complements the bracelets that are given by the Education Committee to the graduates of the educational pyramid programs.

In recognition of Becker’s creation of Kick Up Your Heels and dedication to Global Gaming Women initiatives, the annual award will be named the Patty Becker Pay It Forward Bracelet, sponsored by the Simmons Group. Honorees this year are GGW President and Board Chair Virginia McDowell; Phyllis Gilland; Tina Kilmer, vice president of product compliance, Scientific Games; and Christie Eickelman, vice president of marketing, Gaming Laboratories International.

Individual tickets for Kick Up Your Heels 2016 are $100, and event sponsorships are available beginning at $1,000. Further information and ticket sales are available at globalgamingwomen.org. It will be a fun and inspirational way to network with the most influential women in the gaming industry while raising money for a very important cause, and I hope you will join me there.