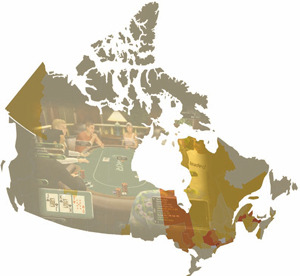 “In poker one has cards, chips, and conversation.”
—John McDonald, Strategy in Poker, Business, and War (1950)

“In poker one has cards, chips, and conversation.”
—John McDonald, Strategy in Poker, Business, and War (1950)

This article will differentiate between two types of online gaming operations offering games to Canadians. The first type of i-gaming provider refers to a provider who is authorized by the Canadian Criminal Code to provide gaming services “on or through a computer.”

In practical terms, authorized i-gaming providers refer to the provincial (or inter-provincial) lottery corporations such as BCLC and the Atlantic Lottery Corporation (ALC).

As of March, BCLC, Loto-Québec and ALC (representing the provinces of New Brunswick, Newfoundland and Labrador, Nova Scotia, and Prince Edward Island) offered i-gaming services to its residents. At this time, ALC was not a part of the Canadian Poker Network. The Ontario Lottery and Gaming Corporation plans to offer i-gaming services sometime in 2012.

The second category of i-gaming service providers in Canada refers to providers who offer i-gaming “on or through a computer” and are not authorized by the code. However, for unauthorized i-gaming providers to be charged under the gaming and betting provisions of the code, Canada must be able to exert jurisdiction over these providers. Canada would only be able to exert jurisdiction over these unauthorized i-gaming providers if the providers have a “real and substantial” connection to Canada. Instead, with one exception, these providers are generally licensed, regulated and located in a jurisdiction other than Canada. The notable exception is the Mohawk Territory of Kahnawá:ke, located close to Montreal, Québec. The Kahnawá:ke Gaming Commission has been licensing and regulating i-gaming from within Canada since 1999.

Internet Poker and the Liquidity Problem

In order to succeed, internet poker service providers must have sufficient liquidity to allow players to play the games they want to play without waiting, have prize pools that are large enough to attract players, and minimize or eliminate overlay in guaranteed tournaments.

There are two main reasons that authorized i-gaming sites are at a disadvantage when it comes to poker liquidity. The first reason is that the unauthorized sites had a 10-plus-year head start. The Canadian Poker Network did not launch until December 2010. Every customer must be new to i-gaming (Why start playing now?), be returning to i-gaming (What caused the departure?) or currently playing on an unauthorized i-gaming site (Why switch to the Canadian Poker Network?).

Generally, the main goal of internet poker sites is to increase revenue. One obvious way to generate revenue is to increase the amount of people playing poker. If the potential pool of players is limited to the provinces participating in the Canadian Poker Network, it will be more difficult to achieve a “critical mass” of players. Is it possible for the Canadian Poker Network to accept players from other countries?

A section of the code sets out the exemptions to the general prohibitions against commercial gaming in Canada. For the purposes of this discussion, the relevant provisions of this section are as follows:

“Notwithstanding any of the provisions of this part relating to gaming and betting, it is lawful

(b) for a charitable or religious organization, pursuant to a license issued by the Lieutenant Governor in Council of a province or by such other person or authority in the province as may be specified by the Lieutenant Governor in Council thereof, to conduct and manage a lottery scheme in that province if the proceeds from the lottery scheme are used for a charitable or religious object or purpose; and

(h) for any person to make or print anywhere in Canada or to cause to be made or printed anywhere in Canada anything relating to gaming and betting that is to be used in a place where it is or would, if certain conditions provided by law are met, be lawful to use such a thing, or to send, transmit, mail, ship, deliver or allow to be sent, transmitted, mailed, shipped or delivered or to accept for carriage or transport or convey any such thing where the destination thereof is such a place.”

In Earth Future Lottery, Prince Edward Island asked its Court of Appeal for guidance as to whether the province could license a charitable organization to sell lottery tickets in other provinces, and potentially in other countries.

Thus, according to Earth Future Lottery, a licensee under that provision would not have authority to offer lottery products outside of the licensing province.

“If Certain Conditions Provided By Law Are Met, Be Lawful to Use Such a Thing”

Section 207(1)(h) provides an exemption to those making or causing to be made gaming and betting materials if the destination of those materials is a place where it would be legal to use those materials.

In R. v. World Media Brokers Inc. (“World Media”),  the defendants sold European lottery tickets to United States residents from Canada. The defendants in World Media relied on the exemption in 207(1)(h), but were found guilty because they were not able to establish that it was lawful to use the lottery tickets in the United States. In making this determination, however, the Ontario Court of Justice implied that the act of selling lottery tickets to people in jurisdictions where it would be legal to sell or buy them would be exempted from the prohibitions on betting and gaming in paragraph 207(1)(h).

‘In the Province’ Revisited

The purpose of the territorial restrictions in section 207 was to prohibit the lottery corporations from competing with each other. In other words, parliament did not intend to prohibit the provincial lottery corporations from operating outside of Canada. How can this be reconciled with the opinion in Earth Future Lottery that lotteries must be conducted in (as opposed to from) the province? Is there a preferred interpretation?

Based on the totality of evidence, the concept of allowing provincially conducted and managed i-gaming sites to accept customers from countries where certain conditions are met cannot be foreclosed.

First, the Supreme Court of Canada dismissed the province of Prince Edward Island’s appeal of the Earth Future Lottery case, but did not give reasons, other than to state that the court dismissed the appeal “substantially” for the reasons of the lower court. “Substantially” means “most, but not all.” It is possible that the Supreme Court agreed with other reasons offered by the Prince Edward Island Court of Appeal.

Second, the paragraph at issue in Earth Future Lottery is relevant to the licensing of charitable and religious organizations. Canadian courts have granted deference to provincially conducted and managed lottery corporations in the past (as compared to charitable organizations) because of the greater risks associated with charity gaming.

Finally, in another decision, the Ontario Court of Justice implied that selling lottery tickets to people in jurisdictions where it would be legal to sell or buy them would be exempted from the prohibitions on betting and gaming by operation and would comply with basic principles of extraterritorial application of Canadian criminal law: If an activity is lawful in Canada, and lawful in the country where the activity is taking place, the code would not apply.

Accepting Customers from Other Countries

If the provincial lottery corporations are able to access customers beyond Canadian borders, their activities would have to be lawful in Canada and the other country. One country that stands out as a potential match is Denmark. Danish i-gaming legislation was drafted to allow licensees to access liquidity outside of Denmark, only paying tax on revenue collected from Danish customers.

The provincial lottery corporations would be able to add Danish citizens to the Canadian Poker Network. This network would be able to differentiate itself from other sites licensed in Denmark as a “safe and secure” government-operated site.

Liquidity, in the sense of achieving a critical mass of players, is essential to the success of a poker site. However, as i-gaming consultant Kim Lund argues, once this critical mass is achieved, liquidity becomes a less important factor in ensuring customers have a positive experience. With a seven-day average of 156 players, the Canadian Poker Network has not yet reached a critical mass, but should receive an influx of new customers as other provinces join the network.

According to Jonas Odman, vice president of the Bodog Poker Network:

“…to run a successful poker room you need a critical mass to keep the games going, but after you have achieved that level of players, liquidity is not key anymore. The battlefield of the future in my view is entertainment, and since different players have different ideas of what entertainment is, we will for the first time in the short history of online poker start to see differentiation in poker rooms.”

The challenge for the Canadian Poker Network will be to differentiate itself from other larger, well-established poker sites.

In addition to increasing liquidity and differentiating itself from other poker networks, another potential strategy of authorized i-gaming sites would be to take a more aggressive stance against unauthorized i-gaming operators. This strategy has been effective in the United States, where three (formerly the largest) U.S.-facing poker sites no longer accept Americans. In Canada, unauthorized sites continue to operate with impunity.

Finally, by offering free play .net sites with no links or pop-ups to “for-money” sites, unauthorized i-gaming operators are able to promote their brand to Canadians. TSN, Canada’s national sports network, has an agreement with Pokerstars.net, and in November 2011, Bodog.net signed a three-year deal with the Canadian Football League to be its exclusive partner for sports betting and poker. Unseating the existing unauthorized gaming providers will be a difficult task for provincial lottery corporations, which seem to be one step behind their counterparts when it comes to advertising.

Poker rooms all have similar features (perhaps a modern version of McDonald’s quote would be “cards, chips and chat”). The success of the Canadian Poker Network will likely depend on its ability to differentiate itself from more popular, already-established sites (and to properly communicate that differentiation to its intended audience).