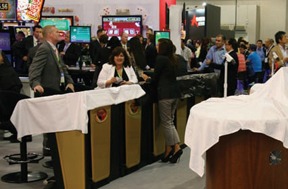 Chun filed suit over SHFL’s Rapid Baccarat multi-terminal hybrid table game product, which he alleged infringes on two LT Game patents. He claimed the game infringes on his patents for multi-terminal systems, which link a table with a live dealer to electronic play stations to allow multiple wagers on a single game.

The product style is extremely popular in Macau, where a baccarat game manned by one dealer has been wagered on by a hundred or more players, who view and bet on the action at electronic play stations.

LT Game claimed to possess two patents giving it a monopoly on the hybrid game, at least in Macau. The dispute boiled over in the Chinese enclave, first in 2009 when customs officials seized Rapid Baccarat units before they could be displayed at G2E Asia, and ultimately in a confrontation on the floor of the trade show itself in May 2012. LT Game officials showed up armed with an injunction from the Court of First Justice prohibiting suppliers from displaying hybrid electronic table games allegedly covered by LT Game patents.

The injunction named four companies—AlfaStreet, F2 Systems, Interblock and SHFL, then known as Shuffle Master. All but Shuffle Master worked out deals with LT Game, agreeing not to show the product. Shuffle Master’s position was that until a court ruled that Rapid Roulette infringed on any patents, it was entitled to display the product to the industry.

“Shuffle Master has always and will always comply with requirements of the regulatory authorities in Macau, and to date, no court in Macau has found that we have infringed upon anyone’s patents,” the company said in a statement in response to the court injunction. “Therefore, we strongly believe in our lawful right to sell all of our products fairly and competitively in Macau and that no infringement of patents exists or will be found to exist.”

After the statement was issued, customs officials showed up at Shuffle Master’s booth, and forced the company to cover the Rapid Baccarat tables with sheets. During the course of the show, the sheets were later removed.

In the decision, the Court of First Justice rejected Chun’s claim of patent infringement and ruled that SHFL’s patent on the game, now called SHFL Fusion Hybrid, is valid.

LT Game says the fight is not over.

“The decision of the Macau court is not final and Mr. Chun will be appealing the court’s decision,” Paradise Entertainment Ltd., parent company of LT Game, said in a statement provided to GamblingCompliance.