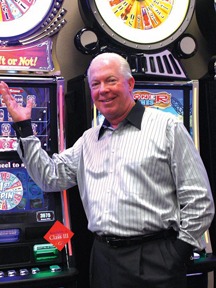 After Bob Miodunski left his job as CEO of Alliance Gaming—which, shortly after his 2004 departure, became Bally Technologies—few thought he would find an offer in gaming that would take him out of his retirement on Mexico’s Baha California Sur.

Few would disagree that Miodunski saved Bally, setting up a company that had been on the brink of bankruptcy for a sustained success that has returned the world’s oldest slot-maker to its former glory.

But as he enjoyed the sun and surf of Cabo San Lucas, getting back into gaming was probably the last thing on Miodunski’s mind. However, when the leaders of San Francisco-based Alpine Investors asked him in 2010 to become interim CEO of its Class II slot supplier, American Gaming Systems, it was an offer he couldn’t refuse.

When asked what brought him out of retirement, Miodunski says he saw a building opportunity more compelling than the custom homes he had been building in Mexico.

“I loved the fact that (AGS) had the recurring-revenue base in Oklahoma and elsewhere, over 7,000 machines on a revenue-sharing basis,” he says. He adds that he liked the fact that AGS had its own R&D operation in Toronto. But most of all, he says, he saw an opportunity to expand the company through a solid slot platform—today called Roadrunner—not only into the Class III space, but into the new Illinois VLT market that had been approved by a 2009 law.

The steady income AGS enjoyed from its recurring-revenue base in Class II, and the fact that it was and is a private company, created a perfect situation for expansion. “It certainly created some stability,” Miodunski says, “and let us focus on long-term objectives rather than just quarterly objectives.”

Miodunski built his core staff with professionals like former Bally colleague Paul Lofgren and former Mikohn game development whiz Dr. Olaf Vancura. Within nine months of his coming on board, Miodunski dropped the “interim” from his CEO title.

“After I assembled a number of the guys I used to work with and knew from the industry, it was like getting the band back together,” he says. “I wanted to be part of that.”

That “band” is well into its first world tour. While Lofgren, VP of sales, spread the word, Game Development VP Vancura perfected the Roadrunner platform, releasing games in Oklahoma, California and other markets while securing Class III licensing in a number of key jurisdictions. After surviving a court challenge, the Illinois Video Lottery Act is in full swing—Miodunski predicts AGS could sell upwards of 3,000 machines to route operators for Illinois bars, representing perhaps 10-15 percent of the market.

Meanwhile, Class III operators were impressed with the lineup AGS brought to the Global Gaming Expo in October. Headed by potential blockbusters like “Blackbeard’s Treasure,” “Pay It Again Poker” and “Caribbean Pearls,” games in the Roadrunner series turned heads at the trade show.

Miodunski says AGS is not aiming to dominate the slot market, only to make money for its customers through moderate placements—a niche, as in the type of game at which Vancura excelled for Mikohn, knowledge-based themes and bonuses. “We’ve acquired the rights to ‘Ripley’s Believe It Or Not!’ (a hit at G2E), ‘Are You Smarter Than A Fifth Grader?’ and ‘Family Feud,’ and we’ve got two internally branded titles in the works for that genre as well,” Miodunski says.

For 2013, says Miodunski, the objectives are simple: continue the Illinois rollout, get Class III product in font of players, and introduce Roadrunner titles into its core Class II markets.

As unlikely as it seemed Miodunski would return to gaming a few years ago, the thought of re-retirement is now just as remote. “We’ve got some great things working here, and I want to see those through,” he says. “2013 and 2014 are going to be pretty exciting years here at American Gaming Systems, and I don’t want to miss it.

“I worked hard the last couple of years to get here. I want to go to the show!”