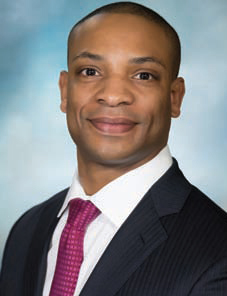 Justin Carter came to the gaming industry with a solid scientific background: years of experience as a drug discovery chemist for Abbott Laboratories. The intriguing conversion of a scientist to a gaming operator took place when he was approached by Caesars Entertainment for the President’s Associate Program at a National Black MBA convention in San Diego. From that point on, Carter started developing and rapidly expanding his professional horizon in the gaming world.

At Harrah’s Casino St. Louis, Carter was a President’s Associate before being promoted to a pre-opening leadership role with the company’s Bahamian project. Soon after that, he was appointed to fill in operational leadership roles at Caesars casinos in Atlantic City and Kansas City.

He considered it a giant leap in his career to join the Emerald Resort and Casino, a Caesars property in South Africa, as operations executive, covering the casino, hotel, zoo, safari, water park and entertainment center.

“When I was provided the opportunity to leave the country and go to South Africa during the 2010 World Cup for the Emerald Resort and Casino, it completely transformed my career and essentially put my growth on steroids,” says Carter, adding, “The sheer scale of the resort I was responsible for, along with the vast cultural differences, really helped build me as a leader.”

Further expanding his international prospects, Carter served as general manager of Manchester235 in Manchester, England, and as regional director of Caesars provincial casinos in the United Kingdom after his stint in South Africa.

With his scientific mind, Carter views the further expansion and advancement of non-gaming amenities to gaming operations as a significant trend in the industry.

“With our customer base becoming more diversified and our competition intensifying, I see gaming operators paying much more attention to its full-fledged offering of resort-style amenities and services,” says Carter, who is dedicated to leveraging his scientific mind and continuing his advancement in the industry to become part of the prospective leadership that ensures a strong and bright future for the gaming world.

In Mississippi, Carter serves as the chairman of the Mississippi Gaming and Hospitality Association. As a total CrossFit junkie, he can routinely be found in the gym at 6 in the morning to undertake his daily exploitation.