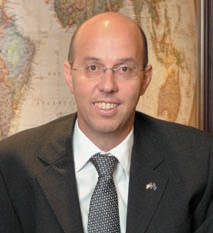 Gavin Isaacs has been on a roll… for about the past 10 years. After coming to America with Aristocrat Technologies, he became an instrumental member of Bally Technologies, where he helped to grow that company into the powerhouse it is today. After leaving Bally, he finished the turnaround of SHFL entertainment, before selling it to Bally for more than billion just a year ago. He took over at the merged Scientific Games/WMS less than two months ago—six months ahead of schedule—and all he did was to arrange one of the biggest deals ever in the gaming industry by going back to his roots to buy Bally in a .1 billion deal.

He spoke with GGB Publisher Roger Gros in late July at his offices in New York City just three days before the deal was announced. While Isaacs obviously could not mention the Scientific Games-Bally deal during the interview, he did answer several questions in writing after the deal was announced. To hear a full podcast of the pre-deal interview, visit ggbmagazine.com.

GGB: Congratulations on becoming the leader of Scientific Games.

Gavin Isaacs: Thanks. A bit earlier than we expected to be talking.

Tell us what the most compelling aspect was in making your decision to go with WMS and Scientific Games.

I think the consolidation of lottery and gaming, along with interactive, was probably the driver. I loved the vision of bringing those three sectors together. Frankly, the idea of spreading the best content over every possible gaming platform you can get was just an amazing opportunity. Plus meeting with our major shareholder Ronald Perelman and his team was very exciting, and sharing their vision for the future. I thought that we were aligned in that respect.

Lottery is kind of the wild card here. You’ve grown up in the gaming business, and then added iGaming to that when you were with Bally and SHFL. What have you been doing to get up to speed in the lottery business?

Gaming and the lotteries have been creeping together over the past few years anyway. All around the world we’ve been dealing with different lotteries. In Canada, you’ve always been dealing with the lottery commissions, and then the VLT expansions put us in business with them. So, it hasn’t been that raw.

I’m delighted that I have such a great company and a great group of teachers, spending time with some of these guys who’ve been doing this for 30-plus years. I’ve been reading up, I’ve been getting tours, I went to a North American Provincial and State Lotteries (NAPSP) directors’ meeting and sat between two really key lottery leaders, who gave me some advice. And so, bit by bit, I’ve been picking it up, and just continuing to read and learn and spending time with my team. It’s been great.

Technology has been converging over the years. The systems are very similar to what we use in gaming. The VLTs certainly were the same kind of thing. Is this really just all these things coming together, not only with the merger of your companies, but also with IGT and GTECH?

Well, I assume their strategic was basically the same, but I do believe that all these things are starting to come together more, and I think there’s opportunity to leverage some of the great contents across those different platforms, and it just makes sense for the economies.

How did the Bally acquisition come about, since your time at Scientific Games has really been so short at this point?

To be fair, Scientific Games started the consolidation when they saw the opportunity to put together key players in lottery, online and land-based sectors with the acquisition of WMS. The strategy has been in place for some time.

In a relatively short time, we leveraged WMS content across Scientific Games lottery platforms, lottery content, gaming platforms, and in the interactive space we are seeing a great blend with Williams Interactive. We saw an opportunity for further consolidation, as well as opportunities for leverage and scale. By virtue of each company’s background we felt that Bally was the ideal partner. No other company offered the same synergies, people fit and product fit. We approached them and they agreed.

How will you position the brands that Scientific Games now owns? Will they all retain their identity? Will there be crossover?

We are taking this momentous step to create a stronger, more customer-centric company. We plan on continuing to maintain the Scientific Games, WMS, Williams Interactive, Bally and SHFL brands, providing a wide variety of products and services to our customers. Following the acquisition, we will have significant depth and breadth through our instant lottery products, lottery systems, gaming machines, gaming operations, interactive gaming, proprietary table games, electronic table systems, gaming systems, and various utility products.

Given your experience with Bally, how are you going to build a corporate culture at Scientific Games that will incorporate all the various elements, including Bally, WMS and the lottery groups?

A unified culture is key to the integration, and we already have much in common. Our companies are focused on innovation, a customer-centric approach and accountability. We expect to build upon our strengths in product development and advanced technology, and the exceptional creative capabilities of our two organizations. We also share a vision to produce the best products imaginable for our customers and players. It’s a bonus that both companies have been involved in major integrations, and both know what worked well and what didn’t. We’ll learn from that and build a culture where everyone is valued, and enjoys coming to work and doing what they are doing.

What do you think is driving the trend of bringing all these companies together, all the different dynamics here, which we’d also seen with GTECH?

I think economies. You look at the opportunities and the costs of keeping up to date and keeping content fresh, and development. You’ve got a fairly flat North American casino market. The expansion of all the different casinos has sort of gone away. You have a fairly steady, slightly growing lottery market, with growth opportunities there. You have an interactive market that’s sort of lumpy, at best: big in Europe, but not off to a great start in America. When you ask, “How do I take my great content and put it across different platforms?” you logically start getting into these other areas. So, I think the big guys benefit greatly by putting that all together. And I think that that’s one of the reasons why, again, I’m attracted to it, and I think why other companies are doing it as well.

Let’s talk about the slot slide, the gaming side. As you’ve mentioned, that’s been kind of flat over the last few years. Not much more expansion. Even the replacement cycle has slowed down to a crawl. Where do you see that going?

I think the replacement cycle slowing down is ultimately a good thing. It’s getting very difficult for me to buy software for my 2004 Apple G4. It just doesn’t exist anymore. And the longer those games stay out there, the more there will be a need to refresh.

And it’s a great pity what’s happened the first six months of this year, where everyone all of a sudden thinks that gaming is dead, which is ridiculous. You start reading about it, and you start reading some commentators and analysts who keep saying things like, “Gaming has to catch up; there’s a whole new younger generation.” In three years, that previous generation of gamblers haven’t died. They’re still there. The problem is that the content’s not fresh, and the properties are getting stale. People are tightening up their machines so much that the people aren’t getting value for their games.

I don’t think we’re helping ourselves. And I think ultimately the opportunity is to make gaming fun again. Make the properties places people want to come and visit. And I think people then will start voting with their dollars and start coming back to the casinos where they love going. We develop different games for the younger generation, but ultimately, you want people who’ve got money. That’s generally your older generation, and I think this industry’s not going away.

What’s your impression of the interactive side? Do you think that’s going to really drive what happens on the machine side?

There are some things that we’re working on now, which ultimately will make that crossover. It’s a great platform to experiment, to see what may or may not work. You’re not bound—because you’re not really gambling—by the same restrictions as you are in land-based. But there will be some concepts that work their way across, and I think that that’s great. That’s great for us to be at the forefront of that. Some of the concepts that are popping up at the moment make the future very exciting.

The regulatory overview of iGaming has really gone much quicker than anybody ever thought. Especially in New Jersey.

When two big companies come together, there’s always talk about operational efficiencies. Have you been able to identify them between these two companies, and then put them into motion there?

In our acquisitions, the integration was well-identified and well-planned. I think people saw synergies, and this is the way we’ll address them. With the WMS deal, we’re well on track if not ahead of track, to achieve those synergies. Which is great. I think there are further ones you can do as you advance.

The synergies we all talk about from a transactional perspective are those that you can achieve in the first two years, for the financial purposes. But as you continue to evolve, and you start getting people talking from different groups, and working out ways to do things together, there are positive revenue synergies, and people learn to refine things and improve. So it’s an ongoing process, and I think the different skill bases, the different groups, the different areas of expertise, as they get to know each other and work better with each other, it’s going to cause both positive and cost-saving synergies as we move forward. Continuous process improvements, something I’m all about. People doing things different ways; you can always learn.

When you’re looking at the business that we’re in right now, do you see big, colossal international companies like your company, like the IGT-GTECH company, becoming the core of the business, and some of these smaller suppliers either fading away or being purchased?

I do. From an economies of scale aspect, and from the amount of R&D necessary, we’re in the technology business. And the only way technology businesses survive is you spend a lot of money on R&D. You know, if there’s less revenue coming in, it’s hard to spend that money, and that means it’s a cycle that you oscillate down.

I think that it’s risky for a customer to buy a title off a small company that’s got one great hot hit of the moment, or even a bank of hits, because you have customers who are keeping their games for 10 years. And who knows if that company is going to survive?

If they’re that good, I’m sure either us or one of those other big companies may end up scooping them up. So, yeah, I do believe that’s the way to go, I think that it’s logical, and it’s going to continue to happen.