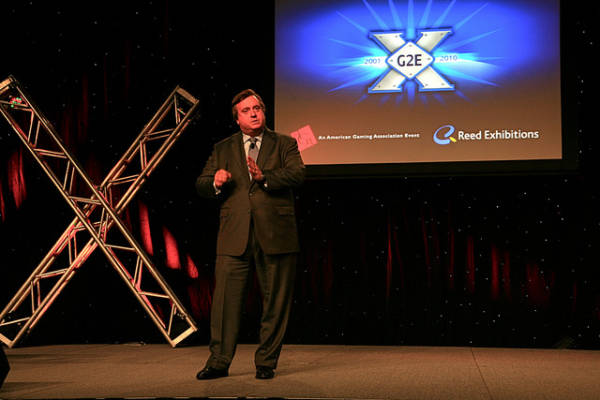 With attendance up—and optimism along with it—G2E bid a fond farewell to the Las Vegas Convention Center and the November dates it had occupied for all of its 10-year history in Las Vegas. Next year, the show moves to the Sands Expo Center on the Las Vegas Strip, attached to the Venetian and Palazzo, on October 2-4, 2011, six weeks earlier than the previous time frame.

Show officials announced an attendance of more than 26,000 people, a boost of 5 percent over 2010. Attendance was also up at the conference program, which featured more than 150 sessions and over 430 expert speakers. But as usual, the excitement occurs on the exhibit floor and this year was no different.

Showy Exhibition
The Global Gaming Expo’s 520-plus exhibits—which included 87 from 25 countries outside the United States—focused on every conceivable area of casino supply, including special pavilions for i-gaming, casino design, security/surveillance and technology.

However, as always, the focus of the 250,000-square-foot exhibit floor was on the technology surrounding the games themselves. Table games were covered thoroughly, from Gaming Partners International’s showcase of the latest advances in casino currency and radio frequency-identification technology to Shuffle Master’s “i-Table” system, displayed prominently on a live roulette table that offered all the benefits of electronic betting stations and precise accounting control.

Much of the attention of attendees, as usual, was on the slot products, from the games themselves to advances in ancillary slot technology. For instance, FutureLogic launched its “Gen3 Evolution” printing system and TransAct Technologies introduced its own marketing advancement with the “EpiCentral” print system. Both software solutions allow promotional coupons and other messages to be printed to casino patrons while they are playing slot machines.

Among the highlights on the slot game side were new play mechanics by Bally Technologies, new networked slot games by WMS Gaming, skill-based game applications by IGT and Konami, advances on an innovative tournament system produced by Multimedia, and a stunning array of new product from Aristocrat Technologies.

State of the Industry Keynote: Gaming Legends
The Gaming Legends keynote was moderated by Nevada political analyst Jon Ralson, and the panelists were indeed legends willing to share experiences from their collective journeys around the block:  Chuck Mathewson, the former chairman of IGT; Leonard Ainsworth, the founder of Aristocrat Techonologies and the head of Ainsworth Game Technology; Steven Perskie, of Perskie, Mairone, Brog & Baylinson, and the former legislator who wrote the New Jersey Casino Control Act; Burton Cohen, a board member of MGM Resorts International and a longtime Las Vegas casino executive; and Frank Fahrenkopf, the chairman and CEO of the American Gaming Association.

Panelists were willing to agree (or at least optimistically hope) that the economy has bottomed out and that it will be all uphill from here, with an eventual return to the discretionary spending on which the success of our industry relies.

There was also resounding agreement that the growth of Asian gaming is not cannibalizing American activity, but rather growing the global gaming pie just as Atlantic City’s emergence in the late ’70s-early ’80s ultimately boosted nationwide interest in Las Vegas.

As for saturation of the gaming marketplace, Fahrenkopf said that his answer to this frequently posed question is, “I can go two blocks in any direction from my Capitol-district office and find a Starbucks. Is the coffee market saturated?  When people stop going, yes, but not yet. Same with gaming.”

Loveman Keynote
While we’ve heard the phrase “a rising tide lifts all boats” to the extent that it has now become trite, when Gary Loveman, the president, CEO and chairman of Harrah’s Entertainment, took the stage at G2E, his keynote message was neither pedantic nor trite. Rather, he eloquently and persuasively posited that we must make normalization of gaming a top priority, so that together we can rise with that tide or grow that proverbial pie.

“While I would certainly prefer for each of you to stay at one of my hotels while in Vegas,” Loveman stated, “I would never insinuate that were you to stay with Steve Wynn, Sheldon Adelson or Jim Murren that you’d get bedbugs.”  Clearly, such a rumor would do nothing to help tourism resurrect the city of Las Vegas from the economic doldrums.

Loveman drew a comparison between this ludicrous and even slanderous statement and the way in which those of us in the gaming industry reinforce the negative and often fallacious perceptions of our industry in order to take a desperate stab at snapping up market share. He played a commercial that recently aired in Maryland that argued the only way to keep morals and family values intact within the community was by voting “no” on legislation aiming to bring gaming to a local shopping mall.

Loveman went on to identify common misperceptions of our industry that we must collaborate to expose, notably, that gaming: