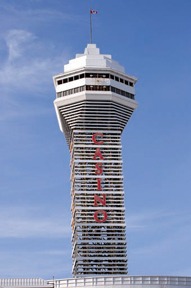 Two long-established casinos in Ontario, which have seen marked declines in patronage, are overdue for a facelift, says the mayor of Niagara Falls. The 10-year-old Niagara Fallsview Casino is “gorgeous, it’s beautiful, but it needs a refresh,” said Mayor Jim Diodati.

Meanwhile, 17-year-old Casino Niagara “looks old, tired,” the mayor said. “The carpets are ratty. It looks like it’s been neglected. It needs a Phyllis Diller-type facelift. It’s just not a draw. It’s like an old bingo hall. It desperately needs an injection of cash.”

Diodati says Ontario should invest in existing casinos rather than proposing even more new properties. According to the Niagara Falls Review, the mayor has urged Ontario Lottery and Gaming Corp. to include the city’s two casinos in its modernization plan.

“The U.S. is injecting millions and building new casinos,” he says. “We’re getting hurt by a converted convention space (Seneca Niagara Casino) in Niagara Falls, New York. We need to focus on growing the pie, not splitting it into pieces.”

According to Niagara Falls Tourism, the casinos on the Canadian side have seen a decline of approximately 30,000 people per month.

Niagara Falls tourism chairman Wayne Thomson says an aggressive approach by the Seneca Nation and a new marketing initiative by the tribe’s Buffalo Creek Casino has left Niagara casinos “probably static, or falling a little behind.”

He says market saturation has divided the customer base and robbed casinos of some of their excitement, and additional gaming will not help.