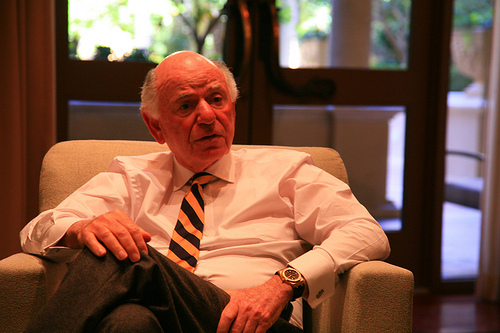 When Michael Leven accepted the offer several years ago of his friend Sheldon Adelson to sit on the board of directors for Las Vegas Sands, he expected to assume a rather typical role for a board member: attend board meetings, listen to the reports from the executives, make some recommendations based on his long experience in hospitality, and approve or reject recommendations from management and the chairman.

What he did not expect was a fiscal emergency that required the full attention of the board simply to prevent the company from imploding. And then when Adelson dismissed the previous leadership, the last thing he expected was to be asked to take over.

But like a true friend, Leven put his own interests aside to help Adelson revive the company, and two years later, he has achieved that and much more.

What made resolution of the fiscal crisis so much more crucial was the company’s developments in Las Vegas, Singapore and Macau, which were all well under way and threatened by failure should the crisis not be resolved. Leven was able to right the ship and keep the projects on line (Palazzo in Las Vegas and Marina Bay Sands in Singapore continued, while parcels 5 and 6 in Macau were put on hold).

Getting through the crisis, Leven concentrated his attention on completing the Singapore project, and its success has been impressive, if somewhat unexpected. He says that by the end of the first quarter of this year, all the aspects of the property will be completely open and ready to fulfill its expectations.

“All the restaurants are open except a few in the mall, and everything, including the museum, will be open by that time,” says Leven.

He’s pleased by the acceptance of the product, which has become a “must see” attraction in Singapore.

“Our MICE business is really starting to ramp up,” he explains. “Our occupancy rate is up in the 80s for 2,500 suites, which is much larger than anything else in Singapore.”

While the numbers being produced by the property didn’t startle him, Leven says the VIP market has been a pleasant surprise.

“We’re setting up our own junkets, unlike in Macau where we depend on the VIP operators,” he says. “We’re finding the players, providing them credit and collecting the money. Our win percentage has fluctuated like it usually does, but we think Singapore is going to be one of the great markets, and since there are only two of us there, it’s going to be that much better.”

In Macau, Leven says they are about 18 weeks behind the projection for finishing parcels 5 and 6 because of government controls over foreign workers there. They were recently approved for 500 more workers, so things are starting to speed up.

“My view is that the government is going to give us just enough to keep us going,” he says. “But they’re in no great rush. They want Galaxy to open and ramp up before we get open. We expect it to open at the end of ’11, at least for phase one. And it will be a long time before another one opens.”

Market share has always been an issue in Macau. Las Vegas Sands has been in the No. 2 spot behind Stanley Ho’s SJM, but recently dropped to third behind Wynn. Leven says the commission rates paid to junket operators is a problem, as well as other loopholes in the regulations.

“Look, it’s always going to be a problem because someone always wants more market share,” he says. “But we don’t measure our success on market share. We look at EBITDA, both the percentage and the numbers. So far, they’ve both held up very well.”

The “Singapore model” of gaming legalization has caused many other Asian countries to consider similar introductions of gaming. Leven says Las Vegas Sands is interested in those regions.

“The Singapore model has been very successful,” he says. “So countries like Japan, South Korea, even India have to pay attention. If they want to build MICE and the tourism industries, this model is very effective. We’ve had numerous conversations in Japan and Korea about bringing our brands there. Korea doesn’t allow locals to gamble, except in one out-of-the-way casino, so if we can get some kind of arrangement that would allow that, we’d love to be there.”

In the U.S., while the Venetian and Palazzo have felt the impact of the economic downturn like all Las Vegas properties, Leven says their performance is improving.

“It’s going to get gradually better,” he says. “It’s not going to rocket forward, but we’re very safe and comfortable where we are as long as we manage our cost and operational structure, and spend the kind of money necessary to keep the product fresh.”

Leven thinks the notion of Las Vegas as a bargain again is a bit overplayed.

“At the quality level, Las Vegas isn’t really a bargain, but it’s a very good value. You can find bargains and decent rooms in other hotels, but at the quality level like us, Wynn, Caesars, Bellagio and others, it’s not cheap. On the gaming side, the locals business is suffering and we’ve lost a lot of the VIP play. Gaming in Las Vegas is a hospitality business and it’s just an amenity in the Strip casinos.”

At the end of the year, another 3,000 rooms were added to the Strip inventory, and at the premium level occupied by LV Sands. Leven isn’t very concerned.

“The impact of the Cosmopolitan will certainly be negative, but not what I’d call life-threatening,” he says.

He points out that CityCenter has not had a huge impact, either negative or positive on Las Vegas. He says it has not become the “must-see” attraction that MGM Resorts had hoped it would be, unlike Marina Bay Sands. Leven says that’s not why people come to Las Vegas anymore.

“If we duplicated Marina Bay Sands in Las Vegas,” he explains, “we’d probably get more of the business that was already coming to Las Vegas, but I don’t think many people would take a trip to Las Vegas simply to see it.”

And that’s what has happened at CityCenter.

“I think the architecture is interesting from a very upscale mindset but not from a mass-market mindset,” he says. “And if we were going to build something new in Vegas, we’d have a different price-point because I don’t think the upscale market is big enough anymore. The missing component in Aria and CityCenter, however, is the group sales. It’s just not big enough to carry them midweek.”

When it comes to his contract renewal and the reputed difficult working conditions with Adelson, Leven disputes that contention.

“Mr. Adelson says what he thinks,” he says. “And when you say what you think and do big things and you’re in people’s face, they’re waiting for you to trip. And when you trip, they hit you when you’re down. But you can’t be an entrepreneur without stepping on a few toes. You just can’t!”

Leven thinks that Adelson should get more credit for the good things he does, because they far outweigh the hurt toes.