Sands in talks with officials in Madrid and Barcelona 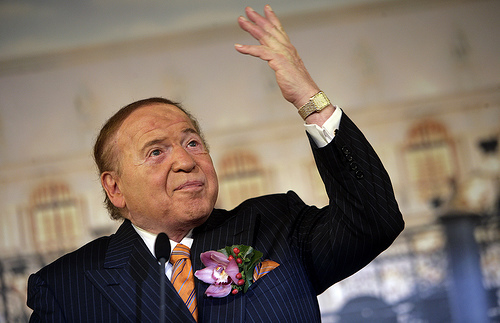 LV Sands CEO Sheldon Adelson says the operator is in talks with officials in Madrid and Barcelona about creating a massive casino resort district along the lines of the Las Vegas Strip. The project would entail several resorts with casino-hotels totaling as many as 20,000 rooms, along with millions of square feet of retail and convention space.

At a press gathering for the opening of an entertainment venue at the Marina Bay Sands in Singapore, Adelson told reporters he is planning to meet with construction contractors, architects and designers in the coming weeks with the goal of assembling a team that could initiate construction of several resorts at once. He estimates the total cost of the project would be €15 billion, or US$20.3 billion, and that the project would create a total of 180,000 jobs.

“We’re very seriously considering this,” he told reporters. “We considered it seriously before the recession, but we postponed it until the recession was over. Now, we are very actively pursuing it. There’s no reason why we can’t do it. I want to do a mini-Las Vegas in Europe. I hope we can use the name Europe Vegas or Euro-Vegas.”

The discussions with Barcelona and Madrid are seeking concessions and subsidies that would move such a project along, and presumably make financing it easier. The concessions necessary would be the issuance of more casino licenses. The maximum number of licenses have already been granted in both regions, and political will to make the changes would be necessary.

One project that is currently on hold is the Gran Scala development in Aragon. The €7 billion project being developed by International Leisure Development has been stalled during a difficult economy in Spain. And that same reason is given by Caesars Entertainment for the lack of progress in its participation in the Don Quixote integrated resort 118 miles south of Madrid. That development would have included the first Caesars-branded casino outside of North America, but has been mothballed since 2008.