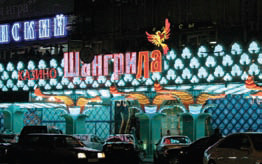 Storm International CEO Darren Keane has been jailed in Moscow since June 22.

Keane is accused of allowing two Storm International casino properties in Moscow to continue to operate beyond the July 2009 mandatory closing of all casinos not located in one of four designated gambling zones. The arrest followed an April raid on the Shangri-La casino in Moscow, where roulette tables are said to have been found in operation.

News of the arrest only surfaced in the English-language media at the start of August, when the St. Petersburg Times reported that Keane’s life was in danger from an untreated medical condition, thrombosis.

Keane, a British national, has since been moved to the Matrosskaya Tishina pretrial detention facility, where he was said to be receiving proper treatment, the Moscow News reported.

Arrest warrants for other, unnamed foreign executives of Storm International are said to have been issued. The company’s website has been taken down voluntarily by the company.

The news of Keane’s arrest followed the introduction of tougher measures for illegal gambling offenses, signed into law by President Dmitry Medvedev in late July.

GamblingCompliance reports that the amendments make it a criminal offense to organize illegal gambling. Prison sentences can now hit six years in some cases.

Also covered in the bill is online gaming, a move seen as a way to stop the gambling at internet café-type locations.