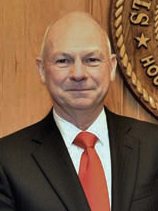 The Louisiana gaming industry has gone from bad to good, and much of that must by credited to Ronnie Jones, who has been chairman of the state Gaming Control Board since 2013. Before that, he was a key member of the State Police, investigating ownership and incidents involving the riverboat gaming in the state. He spoke with GGB Publisher Roger Gros at G2E in Las Vegas in October.

GGB: What was the state of gaming regulation when you took over?

Ronnie Jones: It was fairly stable. It was 180 degrees from where it was when it first began. I was a frequent critic at the time, because I was in State Police, and we had actually voiced our concerns about legalizing any forms of gaming, until the governor told us to shut up. And we did.

In 2013, I would not have taken the job had it not been a stable industry. I was able to see that it was a legitimate industry. We weren’t fighting the same battles we were in ’93. So, it’s stable, but there’s room for growth in the industry for sure.

What is the scope of your oversight? There’s a lot of different forms of gambling in the state. Are you overseeing all of them?

Yes. This board was created out of the mess that had been created in ’93. This was recreated in 1996, by Governor Mike Foster. He saw that there was some dysfunction in the regulatory structure, and so he created this board. We have oversight of all legalized gambling in the state, except for the lottery and charitable gaming.

I think it’s a good structure because it relies on the supervision of two elected officials: the governor and the attorney general.

How about tribal gaming?

There are three tribal casinos in Louisiana, and we have very limited interaction with them. They are sovereign nations; I understand all that. I get that. I’m not here to intrude. But I want to be able to call them if there is an issue, and talk. So we’ve got a good relationship with them, but we have very limited responsibility with respect to the regulation.

You are considered one of the enlightened regulators in the industry. Explain why people view you this way.

Well, one of the first things that I did after I was appointed, I reached out to the American Gaming Association. Geoff Freeman was there at the time, and I just called him one day, and got him to call me back. I said, “I’m the new chairman of Louisiana, I’m trying to learn a little bit about the industry, and I would like to come visit and meet your staff.” And that was beneficial. And those relationships, I have sustained in the last six years. I remember a meeting I had with some of my fellow regulators. A couple of them said, “Why are you meeting with those guys? That’s the industry.” Well, how do you regulate an industry without having some dialogue? I find that there are more areas of agreement that I have with the industry than disagreement. And it’s OK to disagree.

What happened with the legalization of sports betting in Louisiana last year?

My staff and I have been attending every sports betting forum that’s been conducted. We basically copied a lot of what New Jersey had in terms of the rules. In Mississippi, Alan (Godfrey, gaming commissioner) has been very gracious about helping us. So, we were ready with rule development, promulgation. We knew that it was going to be a close vote, but we did not anticipate that it was going to crash and burn the way it did.

It was really surprising. You can bet on just about everything in that state. Most people don’t realize, Louisiana—within the last five years—finally outlawed betting on cock fights. I mean, you could bet on a cock fight in Louisiana, but not on the Saints.

So sports betting didn’t pass because the legislature today is comprised of people very different than the people who were there in 1991. It’s much more conservative, there’s a lot of bias against expansion of gaming, and they saw sports betting as an expansion. And if it’s an expansion, they’re against it. But sports betting is a reality. People are going to Mississippi, they’re going online, they’ve got their barber who’ll take a bet. I think it will come up again.

I’ve shared with every CEO that I’ve talked to, “Between now and next year, you need to figure out what you’re going to get behind, and everybody needs to be on board, if you want this done.” We all know that sports betting is not a cash cow, in terms of revenue. There’s risk involved for the operators. We also know that New Jersey has done it the right way; they have a mobile application. But I counseled those who asked me, I said, “Go with brick and mortar, go conservatively until the state feels more comfortable with it, and then we’ll move to mobile.”

Are you concerned about Texas getting gaming?

Oh, absolutely. Absolutely. But Tilman Fertitta is a smart man. And I don’t think he would have invested in the Golden Nugget property in Lake Charles—which is a world-class facility—the way he did, if he reasonably expected that Texas would legalize it in the short term. I think long term, they’re going to get there. But if what I read is correct, there’s still an awful lot of church opposition to expansion of gambling there. That’s what I’ve been told, so we’ll have to wait and see.