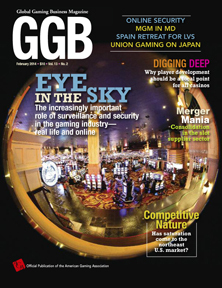 Does every department in a hotel casino have to have a return on investment? Having directed table games, poker and surveillance departments while owning restaurants makes me believe they all can be profitable.

Surveillance has a significant role in growing the business. You may call me a crazy, clueless dreamer, but I have met the CEOs investing in surveillance. These trend-setting folks strongly value surveillance. Of course it’s not the surveillance we’ve grown to know; it’s a new brand of surveillance based on return on investment. Hence the name ROI surveillance.

A couple of years ago a progressive-thinking CEO asked me for help. His problem: little to no return from surveillance. His surveillance department didn’t catch anything, support anything, know anything, or do anything. It was bad. Surveillance actually generated serious reports regarding wet willies. No joke, actual reports on wet fingers in ears. This CEO saw a sinkhole where he knew an ally, a confidant, a business partner, and above all a truth teller could exist. He knew, with investment, he could literally place an angel on his shoulder that could help him make a difference and a profit. He and an ROI surveillance team ultimately made significant differences for the company.

CEOs need not understand everything about surveillance. They must simply be wise enough to imagine the huge resource and potential. Surveillance has the capability to positively influence the casino industry. We need real commitment from company leaders, operational leaders and surveillance leaders to change the dynamics of surveillance from perceived “review station with small return value” to “business enhancer with major returns on investments.”

Imagine this: specialized surveillance division evaluating the true value of players without limiting the protection from the live business. We’re talking an independent group of gaming intelligence specialists housed within a surveillance department that work in complete correlation with the table games and casino marketing teams to competitively compensate the players in a manner that eliminates expensive casino reinvestment errors, marketing scams, and hard-to-detect, high-end advantage play.

Case Study 1: A well-organized group worked in teams of two players on six-deck blackjack games with a 0.26 percentage house advantage. After 40 hours of play, they collected compensation from the casino and a new team would enter the following week (changing players to keep the suspicion low as a single player never hit the radar as a big winner).

GID began to evaluate their value and found distinct areas where the groups were taking high-level advantage of the casino. Patron management systems have limitations. The system rated blackjack players for 80 decisions per hour. These players only played an average of 36 decisions per hour. They deliberately slowed game pace dramatically, played every spot, and spent an excessive amount of time making otherwise simple decisions. Another issue was found in the system, which was set to rate players for a 1.33 percent house advantage.

These players played almost perfect basic strategy, giving the house a mere 0.26 percent advantage. These factors created higher averages and qualified the players for much higher levels of complimentaries and incentives without them actually risking money. The theoretical losses from this high-level advantage play equaled $136,000. Now, consider the potential losses if the play remained undetected and had more advantage teams kept arriving to capitalize on a flawed system. These issues are riddled throughout all casinos. Who’s catching it?

Case Study 2: A craps study revealed that the casino department elected to rate craps players on entire wagers (pass line and come bets plus full odds) as opposed to only rating the wager portions with house advantages (pass line or come bets without odds). This trend was noticed at several properties in Las Vegas after the financial crisis, in order to bring high rollers back to craps.

The mistake made was a failure to adjust the house advantage to compensate for this benefit. Craps players were rated at a generous 1.4 percent. The actual house advantage when rating the entire wager is 0.37 percent. This 1 percent disadvantage against a real savvy player was detrimental to the bottom line (especially when one considers odds carry no house edge). A seemingly small issue became magnified because most properties use the system’s theoretical win to determine a player’s worth.

A routine flaw in the rating system led to over-compensating the player and offering generous discounts on losses. The study helped plug a major hole. If you don’t believe investing in surveillance is worth it yet, this case study of one player provided $372,000 worth of reasons to start.

Case Study 3: GID reviewed every game, breaking down all house procedures. GID searched for loopholes that advantage players or scam artists could pursue and combed for ways to save money and increase profitability while remaining competitive in the casino market. During one review, an abnormality on the game Three Card Poker concerning house rules was noted.

The house paid tie hands when the player and dealer held the same hand. This seemingly slight alteration of rule lowered the house advantage by 0.13 percent from 3.37 percent to 3.24 percent. Being the only property to pay for ties made little sense, and the adjustment added $65,000 per year to the bottom line.

These three case studies, from a larger portfolio, indicate the powerful resource a well-organized and invested-in surveillance department can achieve. Has creating profits and solidifying business applications with surveillance piqued some interest by our CEO readers?

Six months ago, another progressive division was added to the realm of the surveillance department in the form of a Fraud Investigations Division. After all, the majority of today’s financial resources come from outside of gaming and are found in restaurants, retail outlets, bars and nightclubs.

To date, Surveillance’s Fraud Investigations Division has observed $14,986.22 in actual theft combined with another $815,477 in theoretical savings. These two specialized surveillance divisions provide round-the-clock business support and data-mining to areas of high financial traffic, and also free up surveillance operations to assist and protect the live casino operation.

Over a 12-month period the Surveillance Operations Division made a $1,610,000 difference, and actually received $448,000 for the casino in restitution from catches. ROI surveillance provides true accountability and establishes a no-nonsense reputation. Every CEO could use assistance with accountability, because like it or not, logically he knows unfound theft and scams grow.

“Sometimes when you innovate, you make mistakes. It is best to admit them quickly, and get on with improving your other innovations.” —Steve Jobs

Trending Problem: Surveillance is Not Security

To understand what ROI surveillance is, we must first understand what it is not. Surveillance is not security. Stockholders should be alarmed when a company cuts corners regarding surveillance, one of the primary regulatory oversights of their investments. Decisions our casino forefathers instilled were for very specific reasons, including the importance of checks and balances between surveillance and casino operations which, like it or not, include security. A CEO’s expectation of surveillance must grow, while holding surveillance professionals accountable instead of shipping this valuable asset to security.

No more monitor zombies! The days of hanging cameras simply because it’s required, with surveillance personnel blankly staring at a monitor screen, are over. We know what surveillance should not be and saw an insight of what it can be, but how do we make great surveillance happen?

A defined modern ROI surveillance expectation is a good start. Surveillance is the intelligence resource where a company’s operational and informational segments collide, and from that central point are monitored, audited and investigated in an effort to protect—and more importantly help create—company assets. We are in the asset creation business, not the asset protection business.

One minor twist on words can provide a CEO with a better understanding of who they need leading surveillance, and it can also create a major change in surveillance’s attitude, goals and results. A progressive surveillance department is a critical partner in business growth.

“There are no great limits to growth because there are no limits of human intelligence, imagination and wonder.” —Ronald Reagan

My surveillance brothers and sisters may not love this suggestion; however, they will agree they need the help of their CEOs. Surveillance needs a serious investment in a variety of ways. Areas in dire need of investment also need audits of actual value and the foreseen opportunities.

Thus, every CEO should commission an independent expert of ROI surveillance to perform a surveillance health check audit. To be fair, one can’t suggest surveillance is the check and balance for casino operations and security without realizing that surveillance needs a solid review, and more accountability, too.

Do you really think CEOs would have allowed companies to even have considered combining security and surveillance if surveillance had been perceived as a valued asset? The cold hard truth is that most surveillance departments have a considerable amount of growth opportunity to become ROI surveillance-worthy.

A surveillance health check is the core basis toward creating something great and worthy of investment. The foundations to review are Community, Operations, Training, Information and Department Marketing:

Community: A review of community begins with an assessment of the surveillance organizational chart. Two important elements: First, surveillance must report independently of operations, achieved through reporting directly to a CEO, CFO, board of directors, or a tribal gaming commission. Second, ROI surveillance must have layers to include trained leaders and specialized divisions monitoring specific areas with specific goals. All occupations have specialists, and so does surveillance. Police departments have patrol, vice, homicide, etc. The medical field has specialists for everything from orthopedics to neurology. ROI surveillance commits to direct intelligence and business support.

Operations: Here are the three big questions for the CEO: Is the surveillance department productive? Does surveillance have the tools necessary to be productive? Is the room environment conducive to the goals of investigations and business support?

Training: Basically, if the people watching the monitors don’t know what they are watching, they essentially aren’t doing anything. My surveillance brothers and sisters will either cheer or cringe, but this needs saying—surveillance professionals just aren’t that knowledgeable these days. CEOs who are not investing in surveillance training may as well give themselves a wet willy, because ultimately the joke’s on them for not utilizing a powerful tool already paid for each year.

Information: News flash: Surveillance rarely receives the information necessary to protect or investigate potential issues; never mind attempting to help business growth. Progressive CEOs want surveillance to have all the access required to get the job done. A good rule of thumb: If casino and business accounting teams and internal audit have access to a report, or access and training for certain programs, so should surveillance.

Department Marketing: How is a CEO going to help make ROI surveillance if they don’t know what surveillance is doing? CEOs should require reports from surveillance that matter, and ask why when the reports don’t show progress. ROI surveillance is not a hidden secret, as nothing protects assets better than a successful reputation. Surveillance must also assist the growth of other departments by auditing them and providing useful and constructive insights.

Be mindful, surveillance insights cannot be utilized as big brother. In other words, operational management must still step up and manage, or surveillance quickly becomes the embattled enemy rather than a resourceful tool.