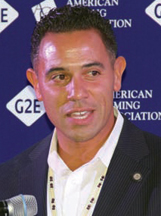 Rodney Butler joined the tribal council for the Mashantucket Pequot Tribe, the owner of Connecticut’s Foxwoods Casino Resort, in 2004. He became chairman of the council in 2010 just in time to manage the financial crisis that surrounded Foxwoods at the time. Now, Butler faces other hurdles, the first of which arrived last summer when Foxwoods CEO Felix Rappaport passed away unexpectedly. Butler was appointed interim CEO by the council and now is grappling with the opening of MGM Springfield, Twin Rivers in Rhode Island and next year, Encore Boston Harbor. And a recent decision from the Department of the Interior may derail a third Connecticut casino that would be owned jointly by the Pequots and Mohegans. He spoke with GGB Publisher Roger Gros at G2E in Las Vegas in October.

GGB: First of all, let’s start with offering our condolences to you and the Foxwoods family on the loss of Felix. We’ve known him for 25 years and he was a visionary, so it must have been a big blow when he passed away.

Rodney Butler: You know, it certainly was. And as you said, he was such a visionary, brought so much to Las Vegas and then had the ability to convert that to Foxwoods. Look, we’ve been in the business for 26-plus years, and he came in and literally re-faced the entire property, in the last two and a half to three years.

Why did you decide that you wanted to take over, rather than just bring in somebody new right away?

Well, I certainly didn’t decide I wanted to take over.

The great thing about Felix is he was a builder—a builder of vision, a builder of property, and a builder of a team. And he built an incredible team for us in the last four years, not only bringing in new people, but also lifting up those that have been there for quite some time. And so, we have a good mix of new team members, and team members that have been with us for 20-plus, almost 30 years in some cases. And they’re all performing at a very high level. And so, the fact that he had the right team in place, the right strategy in place, we just refreshed the entire property.

I had been involved almost daily with Felix. I’ve been chair of the nation for nine years, I was treasurer for five years before then. I actually started at Foxwoods, in 1999, as a gaming analyst. So I was very tied in with all of the key strategic decisions we were making. And so, it was natural for me to just be able to pick up in the interim, just to keep balance and consistency, to pick up that role. And it also allows us to not have to rush into making a good or potentially bad decision.

Let’s talk about some of the obstacles and opportunities you have here. First is the opening of MGM Springfield, in late August. What kind of impact have you seen so far?

You know what? So far, so good. Our slot numbers were down slightly, but not as much as we had anticipated, which is good. And that’s primarily because of all the planning that we put in place.

There are so many things that we have that a property the size of MGM will never be able to financially make sense of. We’re still seeing that strong weekend traffic, that strong entertainment-driven traffic. Midweek has been a little slow, but we also had Twin River open up their second facility as well, at the same time.

The second challenge now is the recent decision from the Department of the Interior to not back your third casino in East Windsor. What’s your thinking on that right now?

Obviously we’re disappointed by that and we feel that they made the wrong decision. We’re reviewing our options right now, and there’s a couple of paths that we can continue on. But the Interior Department has said consistently that they don’t necessarily feel that we need to have the compact amended. And so, that’s an option to pursue, as you move forward.

MGM and some state legislators have said any third casino should throw it open to a bidding process and allow multiple bids. Would you be averse to that?

Certainly we would be, when we fought against that for the last two years in the legislature. Unfortunately, some of those folks are a little bit ill-informed because of the canvassing that, quite frankly, MGM has done in the state of Connecticut. I mean, you go into the state legislative house, and it’s like the MGM office complex.

But we realize that’s business, and that’s what they do, and they do that very, very well. I’ve complimented (MGM CEO) Jim (Murren) on his success, and Uri Clinton, his lead on the ground there, and they’ve both done a great job.

We believe that we have a plan, and we’ve worked through this with the leadership in the state, that can grow the gaming industry in Connecticut, and preserve and protect that income that they’re currently receiving.

MGM’s argument, of course, is that a casino in Bridgeport will produce much more revenue than a casino in East Windsor.

The argument for MGM is they just spent a billion dollars in an under-performing market! So, they can’t take any more hits, right? And if they believed in that argument so much, then they probably wouldn’t have bought Yonkers as well.