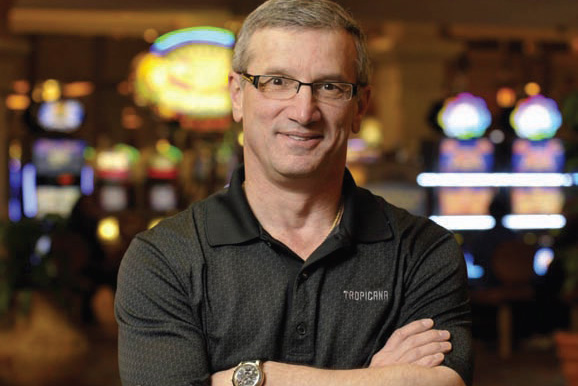 Carl Icahn has gotten his pick for Caesars Entertainment’s new CEO, industry veteran Tony Rodio. But how long Rodio will keep the job could be another matter entirely, with two potential buyers currently poring over the gaming giant’s books and possibly more to follow.

The change in leadership was not unexpected. Neither was the choice.

With Caesars’ share price (Nasdaq: CZR) swooning through most of 2018, Chief Executive Mark Frissora tendered his resignation in November. But no replacement was immediately found, and when his contract expired in February, he agreed to stay on until the end of April. That the replacement would be Rodio was a foregone conclusion once Icahn had amassed a controlling equity stake earlier this year—and with it three seats on Caesars’ 12-member board of directors—and indicated he wanted the job to go to his former top executive at Tropicana Entertainment.

Rodio, who most recently was CEO of regional operator Affinity Gaming, also will have a seat on the board.

Icahn also has made clear his belief that what CZR needs is new ownership to turn around the company’s performance, and he’s been leading other activist investors in pushing for a sale.

Not surprisingly, Caesars said last month it was assembling a “transaction committee” to include two of Icahn’s directors to review “ongoing efforts in creating additional shareholder value.” In a statement announcing Rodio’s hiring, the company said the committee and the investment bank assisting in the process will consider several paths, including “continuing to operate as an independent public company.”

Macquarie Securities gaming analyst Chad Beynon said, “While the company acknowledges there is no timetable for any transactions or results, we believe this is to evaluate takeover bids.”

And, in April, The New York Post said it has learned that billionaire Tilman Fertitta, whose attempt to acquire Caesars in a $13-a-share reverse merger was rejected last year, was back in the picture, joining regional casino giant Eldorado Resorts in the due diligence process. Eldorado, not coincidentally, is the company that bought Tropicana from Icahn last year for $1.85 billion in partnership with Penn National Gaming’s Gaming and Leisure Properties REIT.

Despite the scale and diversity of its portfolio—53 properties in 14 U.S. states and five other countries and the World Series of Poker—Caesars has struggled to build investor confidence since emerging from a Chapter 11 reorganization of its largest operating subsidiary in the fall of 2017, a 33-month ordeal that was the legacy of an ill-fated leveraged buyout by private equity giants Apollo Global Management and TPG Capital. Completed on the eve of the Great Recession, the acquisition buried the conglomerate, then known as Harrah’s Entertainment, under some $25 billion of debt.

The reorganization cut $16 billion of the debt load, relegated Apollo and TPG to minority shareholders (they’ve since divested entirely) and spun off ownership of 20 of the casinos to a newly formed, separately traded real estate investment trust, VICI Properties.

Disappointing earnings throughout 2018 didn’t help, however. The stock fell 16 percent over the last 12 months, plummeting to a multi-year low of $5.84 at one point in December, valuing the largest casino operator in the world at just $4 billion and opening the door for Icahn, a number of activist hedge funds and Fertitta, who owns the Golden Nugget casinos, the Landry’s restaurant chain and the NBA’s Houston Rockets, to swoop in.

The new year saw CZR bounce back by around 40 percent, and currently it trades at around nine times 2019 forecasted cash flow, which is roughly a 17 percent discount to its largest competitor, MGM Resorts International. And there is still close to $9 billion of long-term debt on the balance sheet.

Icahn has spent some $1 billion to acquire what is now a 28 percent stake in the company, including swaps, and he is not in the business of losing money. His previous forays in the gaming industry have included ownership of American Casino & Entertainment Properties, one-time parent of Las Vegas’ Stratosphere casino hotel, the never-opened Fontainebleau on the Las Vegas Strip, and Tropicana, and he eventually sold them all at tidy profits. He also owns the land under Atlantic City’s shuttered Trump Plaza Hotel and Casino, which closed in 2014.

All of which begs the issue of where Rodio fits in the picture.

The 60-year-old brings more than three decades of experience to his new job, but as SunTrust gaming analyst Barry Jonas pointed out, he has never managed a company of the size and scope of Caesars.

“We believe the key question here is whether Mr. Rodio is being appointed to run the company for the long run or to help prepare for a potential sale,” Jonas said. “We could see either scenario, given his past experience.”

That experience was mostly acquired in Atlantic City, and also includes high-level positions with Hollywood Casinos, now owned by Penn National, and Harrah’s Entertainment. He worked at Tropicana from 2011 to 2018 and was chief executive and a member of the board of directors when Icahn sold the company and its seven casinos to Eldorado and GLP. At Tropicana, he was credited with overseeing capital improvements, including a complete overhaul of the flagship, Tropicana Atlantic City, that helped boost corporate revenues by 50 percent.