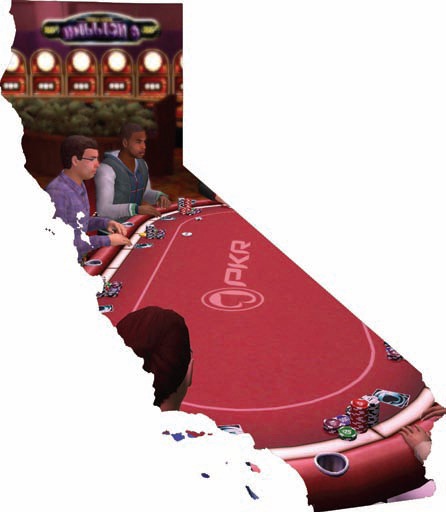 California Assemblyman Reginald Jones-Sawyer is bullish on the state’s potential to become the nation’s mecca of internet poker.

“We believe California will be the royal flush of online gambling in the United States,” the Los Angeles Democrat says.

Efforts to accomplish that goal generated momentum in the 2014 legislature, largely due to general agreement by a coalition of 13 politically powerful American Indian tribes on what an online poker bill should look like.

Stakeholders failed to get a bill voted out of committee by the August 29 deadline for introducing legislation.

But after six years of frustration getting internet poker in the Golden State—a potentially lucrative market of 38 million people—many now believe enabling legislation will finally emerge in the two-year legislative cycle beginning in December.

“Over the past seven months, we have seen tremendous progress regarding this issue,” he says, noting that for the first time tribes appear generally united on the issue.

“I think there is a very good chance it will happen in 2015,” says gambling attorney and author I. Nelson Rose.

But recent interviews with three dozen tribal officials, politicians, industry experts, regulators, stakeholders and others reveal skepticism internet poker will make it through the California legislature by 2016.

There is, instead, agreement the path to online legislation in California will be both steep and littered with political, regulatory and economic hurdles.

“A lot of very complex issues have yet to be resolved,” says Arthur Terzakis, director of the state Senate Government Organization Committee (GOC), which oversees gambling legislation.

The caution is understandable.

The state also has the country’s most complex gambling regulatory systems, with the state and equally sovereign tribal governments exercising at times overlapping responsibility for 60 Indian casinos, 88 card rooms, racetracks and the lottery.

“No state has the gambling landscape you find in California,” a tribal official says.

With such a myriad of gambling stakeholders it comes as no surprise internet poker would prove problematic.

Reaching agreement among tribes, card rooms and the thoroughbred industry on an internet bill has been fraught with difficulties.

The 13-tribe coalition threatens to block any bill that would permit licensing international online giant PokerStars and other companies alleged to have taken U.S. wagers after enactment of the Unlawful Internet Gambling Enforcement Act (UIGEA) of 2006.

But the Morongo Band of Mission Indians, three Los Angeles-area card rooms and PokerStars have formed a second coalition that threatens to block legislation that includes “bad actor” provisions that could preclude the company from being licensed.

Meanwhile, the Pechanga Band of Luiseño Indians and Agua Caliente Band of Cahuilla Indians, among other tribes, threaten to block any bill proposal that licenses racetracks.

The politically influential racing industry, in turn, threatens to block proposed legislation that does not allow them to operate poker websites.

“There are a number of potential stoppers,” Quintana says.

“There are plenty of participants that could block the passage of a bill,” agrees John Latimer of Capitol Advocacy, lobbyist for PokerStars. “It’s going to be very difficult, particularly with tax legislation requiring a two-thirds vote of the legislature. There needs to be an awful lot more consensus than we’ve had so far.”

“There’s a lot of uncertainty. There are a lot of unanswered questions,” says a high-ranking capital staffer who requested anonymity. “Anyone who tells you it’s a slam-dunk to happen next year I think is being very optimistic. The obstacles haven’t been removed.”

If and when a bill is approved, it is expected to take about two years to get the industry up and running.

With the years of delay, the mantle of leadership California was expected to wield on internet gambling in the United States is gradually being ceded to East Coast states unencumbered by such a complex and diverse commercial and tribal gambling industry.

And the way forward for online wagering in Indian country may not, as anticipated, be led by California’s influential casino tribes, but rather a handful of small Indian bands seeking to launch legally groundbreaking websites under federal law. (See page 106.)

The California online gaming debate is dominated by two issues: involvement by the racing industry and “bad actor” provisions in draft bills intended to bar licensing of PokerStars.

Allowing tracks licenses to operate poker websites is generally viewed by the tribal coalition as violating voter-approved public policy of limited gambling as well as a potential erosion of tribal casino exclusivity guaranteed in the state constitution.

But there is a sharp divide among coalition members on the issue. Some tribes are not overly concerned about licensing tracks. Others—notably Pechanga and Agua Caliente—regard it as a deal-breaker.

Jones-Sawyer and others in Sacramento are convinced a bill will not make it out of the legislature without support of racing, a vast industry that includes track operators, thoroughbred and quarter horse owners and breeders, labor unions and some 50,000 workers.

The question posed by lawmakers and Governor Jerry Brown is what concessions are to be made to the tracks: licensing eligibility or a guaranteed revenue stream from internet taxes and fees?

“Horses have to be included in the bill. We’re just as legally entitled to this new form of gaming as anybody else,” says Robyn Black of Platinum Advisors, a racing industry lobbyist.

“We want a seat at the table, on a level playing field,” says Joe Morris, president of the Thoroughbred Owners of California. “If there are licenses out for sites, we want a site also.”

International giant PokerStars and its wildly popular Full Tilt brand threatens to devour half the California market, potentially discouraging competition and generating strong opposition from such tribes as the United Auburn Indian Community, partners with bwin.party, and Rincon Band of Luiseño Indians, partners with Caesars Entertainment and WSOP.com.

PokerStars in 2012 settled a federal money laundering and bank fraud indictment for $731 million, admitting no wrongdoing but severely limiting its regulatory prospects for operating in the United States.

The situation changed dramatically in June, when Amaya Gaming of Canada completed a $4.9 billion buyout of Rational Group, parent of PokerStars, divesting the company of its ownership and management and improving its prospects for re-entering the U.S. market.

New Jersey, where Amaya was already licensed, is expected to bless the newly structured company and states such as California are reconsidering “bad actor” provisions in proposed legislation.

“The legislature on the whole agrees with us on the bad actor issue,” Quintana says. “But legal and technical complexities have been introduced because of the sale of PokerStars. The spirit of the bad actor provision as we put it forward is still there.”

California legislators are mulling over whether to target “tainted assets” in “bad actor” licensing prohibitions in bill language. Such a change does not mollify the Morongo coalition, which intends to sue if a bill limits the company’s ability to operate in California.

“The bad actor clause is like your appendix, unnecessary and potentially troublesome,” says Keith Sharp, attorney for Commerce Club, Hawaiian Gardens and Bicycle Club, coalition partners with Morongo and PokerStars.

“I think there are some serious constitutional issues with bad actor clauses. I don’t believe it will survive a challenge. I think it is likely to be challenged.”

Rincon Councilman Steve Stallings stands behind legislating regulatory standards for companies that took wagers in apparent violation of UIGEA, including restrictions on the use of “tainted” assets.

“Legislation with bad actor clauses not only looks at the ownership, but the company as a whole—the management, the platform, the games,” Stallings says. “The tribes aren’t going to want to take out that bad actor provision just because there’s been a change in ownership.

“I think they’re eventually going to get licensed,” Stallings says of Amaya/PokerStars, “but it’s going to take a while. There’s got to be more changes in the company before that’s going to happen.”

“We must make sure that any ‘bad actor’ language is written so that it is applied fairly, and avoids any possible future legal challenges,” Jones-Sawyer says.

Although coalition members are publicly united on bad-actor provisions, some privately express different opinions on keeping PokerStars out of the market.

“They are really bad people,” one tribal official who requested anonymity says of PokerStars. “The reason they are so competitive is they’re bad people. They made $5 billion (taking wagers in apparent violation of UIGEA). We can’t compete with them.”

“Certainly they’ve set a standard worldwide with online poker play,” says another tribal official and coalition member. “I don’t know how an industry in any environment—whether it’s the U.S. or California or Europe—wouldn’t want the best.”

But results from Nevada, New Jersey and Delaware have been discouraging, particularly for California licensees faced with the prospects of competing with PokerStars.

No more than three or four websites are expected to dominate the market—some predict PokerStars, bwin.party and WSOP will lead the pack—and legislators are suggesting upping entry fees far beyond the $5 million suggested in bill drafts from the tribes.

If a bill is proposed to legalize online wagering and does not generate sufficient revenue to the state, says Adelson lobbyist Fabian Nunez, “I guarantee you legislators would not pass it.”

Pechanga Chairman Mark Macarro has made no secret of his tribe’s motivation on internet gambling and its value more as a marketing tool than a revenue-generator.

“We do not suffer from the irrational exuberance that internet poker will generate hundreds of millions of dollars,” Macarro says, but with the evolution of online gambling “we believe it’s preferable to drive the bus rather than getting run over by it.”

Some privately suggest Pechanga and other tribes had a strategy to block or delay rather than promote online legislation. A tribal official close to Macarro brands the allegation as “ridiculous,” noting the leadership role Pechanga took in achieving consensus among tribes on the issue.

Some of the 13 tribes in the coalition do lack the resources and/or incentive to launch websites. The Viejas Band of Kumeyaay Indians, a coalition member, recently renegotiated its tribal-state compact to reduce payments to the state as part of an ongoing financial austerity program.

Outgoing Senator Lou Correa, sponsor of an online bill drafted by the coalition that failed to make it out of the Senate GOC he chaired, has pledged to assist stakeholders in developing legislative policy and bill language for the upcoming session.

Racing industry officials have reached out to tribes to discuss their differences.

And Morongo Chairman Robert Martin intends to be a player in the upcoming debate.

“We’ll be back after the first of the year,” Martin says of the tribal/card room/PokerStars coalition. “What we’re going to do, specifically, I couldn’t tell you. But we’ll be back.

“Maybe we’ll put a bill out there.”