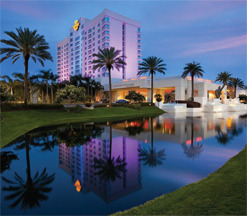 Political upheaval within the Seminole Tribe of Florida is not expected to have a significant impact on an ongoing legal dispute over the American Indian nation’s casino gambling regulatory agreement, or compact, with the state of Florida.

Nor is tribal politics likely to slow anticipated growth of the Seminoles’ multibillion-dollar economy, centered on its Florida casinos and Hard Rock International, which, after an agreement to consolidate all Hard Rock franchises, is expected to grow its inventory of branded hotels, cafes and casinos across the United States and abroad.

The era of legendary Seminole Chairman James Billie came to an abrupt end in late September with his ouster by the tribal council, citing undefined “various issues and procedures” raised in an anti-Billie recall petition.

It was Billie’s second forced departure in the almost three decades he has served as head of the Seminole Nation. Billie’s initial 22-year reign began in 1979 and precipitated the rise of the Florida tribe from an impoverished indigenous community to a gambling industry giant.

It is unclear what if any impact Billie’s departure could have on the Seminoles’ ongoing political and legal battles with the state legislature over table games allowed under the tribal-state compact.

“The ouster of James Billie could further complicate” the dispute, which has delayed $1.8 billion in planned expansion projects at the tribe’s Hard Rock hotel casinos in Tampa and Hollywood, Florida, wrote Jerome Stockfisch in the Tampa Times.

However, most tribal insiders suspect Seminole leadership is unified in its fight with the state over the compact, which is currently before a federal judge.

Nor is Billie’s departure expected to impact the tribe’s multibillion-dollar business empire, which is dominated by its Florida casinos and ownership of Hard Rock International (HRI), operators of 23 hotels and resorts and more than 160 Hard Rock cafes in 71 countries.

Since it was purchased by the tribe in 2007 for roughly $960 million, HRI annual revenues under Allen’s leadership have increased 51 percent to $663.3 million in 2015, according to public filings.

HRI’s casino and hotel inventory could grow substantially with September’s reacquisition of BREF HR LLC and affiliate Brookfield Financial LLC, which owned the Hard Rock casino brand west of the Mississippi and in certain foreign countries.

Management of Seminole tribal business enterprises, including Hard Rock operations, is largely kept separate from tribal politics. And the council is hugely pleased with Allen’s leadership of both HRI and Seminole Gaming.

“But the point man for their economic development has been Jim Allen,” Sortal says. “Allen is pretty much the guy. And the tribe is very supportive of him.

“Look at the results,” Sortal says of Allen’s time since taking over control of HRI and Seminole Gaming in 2001. “They understand what he does for the tribe.”

A veteran casino executive with a pile of industry awards, Allen has grown Seminole Gaming and HRI into a conglomerate that generates $5 billion a year, 90 percent of the tribe’s annual revenues. Other tribal businesses include tourism and cattle ranching.

The Seminole purchase of HRI from London-based Rank Group Plc. was the largest single economic diversification in tribal history.

“This is a proud moment for the Seminole Tribe of Florida and for all Indian tribes,” Mitchell Cypress, then chairman of the tribal council, said in announcing the HRI acquisition nearly a decade ago.

“It is also an opportunity for the Seminole Tribe to diversify its business operations and help a very successful company to achieve even greater growth.”

Vice Chairman Max Osceola compared the HRI acquisition to the American Indians sale of Manhattan to the Dutch for “trinkets.”

“We’re going to buy Manhattan back one hamburger at a time,” Osceola said.

But many tribal elders were skeptical.

“Certainly it will be on my tombstone, ‘The tribe thought I was a little bit crazy,’” says Allen, a veteran of the Trump Organization and Sun International Hotel and Casino Group.

“It wasn’t that they didn’t like the idea. They were a little bit surprised we had the ability to enter into negotiations at that scale. Obviously, we were successful.

“What’s really amazing about that deal is we didn’t take one penny out of any tribal bank account,” Allen says, but instead leveraged existing tribal businesses.

The growth of Hard Rock has been impressive.

The growth will likely continue, perhaps dramatically so.

The week Billie was expelled, HRI announced it was reacquiring the Hard Rock hotel and casino rights in the western United States and key international locations from BREF HR and affiliate Brookfield Asset Management. Those gambling and hotel rights were not included in the 2007 acquisition, and the separate Hard Rock companies date back to the split between Hard Rock founders Peter Morton and Isaac Tigrett in 1981.

“This is a historic day for the brand, and we could not be prouder to announce this acquisition that we believe ignites the path for further expansion around the globe,” Allen says of the deal, details of which remain secret.

“With the newly acquired rights, the Hard Rock brand has now been united for the first time in more than 35 years under one controlling ownership, the Seminole Tribe of Florida, allowing for globally consistent customer service and standards at all of our locations.”

HRI is now exclusively entitled to develop, own, license, franchise and manage Hard Rock casinos and hotels in the western United States as well as Australia, Brazil, Israel, Venezuela and Vancouver, British Columbia.

BREF HR affiliates will continue to own and operate the Hard Rock Hotel & Casino Las Vegas.

The vast majority of the nation’s Native American tribes are west of the Mississippi, providing Seminole with a wealth of opportunity to partner with other Indian governments seeking to adopt the Hard Rock brand in connection with a cafe, hotel or casino development.

“There are certain inquiries we are going to pursue,” Allen says. “We’re certainly very optimistic—with the Seminole being the owner of Hard Rock—sitting down with other tribal governments.

“A potential partnership has a greater opportunity to be successful when it’s two tribes, two sovereign governments, working together.”

Dolphins’ Stadium Gets A New Name

While expanding its brand internationally and west of the Mississippi, Hard Rock in August also raised its profile closer to home, entering into an agreement with the Miami Dolphins professional football team to rename its facility Hard Rock Stadium.

The stadium is expected to host not only professional football games and an upcoming Super Bowl, but college events, concerts and international soccer matches, including the return of Real Madrid for the International Champions Cup in 2017.

The 18-year deal is believed to be worth about $250 million, or $14 million a year, the third-highest annual naming rights payout for a National Football League stadium.

Hard Rock had other stadium naming offers, Allen told the Miami Herald, but settled on the Dolphins facility “because of the location, the tribe being here; and Miami is a gateway to Latin America.”

The company’s gambling interests have little to do with the naming agreement.

“It’s important to note that Hard Rock is a multi-faceted entertainment brand with its name on cafes, hotels and live music venues, and there is no connection between the stadium and any of the Hard Rock casinos,” Seminole spokesman Gary Bitner says.

The new name caught on quick.

Expansion plans for the Tampa Hard Rock include a 500-room hotel tower, a music venue, banquet and meeting rooms, a poker room, stores and remodeling of the entrance and Hard Rock Cafe.

Plans for the Hollywood Hard Rock include an 800-room, 34-story guitar-shaped hotel, restaurants and a nightclub.

The work is conditioned on a favorable resolution to the tribe’s dispute with the state over promised exclusivity to offer house-banked table games such as blackjack, roulette and craps.

Keeping the brand fresh and relevant is a constant challenge, Allen says.

“Rock music is a sustainable brand; it transcends generations,” says Bacon, but in designing cafes in New Orleans and Memphis he incorporated local jazz and Elvis Presley memorabilia to give the properties a local flavor.

Allen says HRI is true to its roots.

“Certainly we haven’t forgotten about Elvis, the Stones or the Beatles,” he says.

But the company is continuing to update its music focus to meet the emerging market. Rihanna was Hard Rock’s signature artist for 2016 and Pitbull has that distinction for 2017.

“The majority of music we’re involved with, by far, is a global, international group of today’s artists versus the rock ’n’ roll artists of the ’60s and ’70s,” Allen says.

Although the tribe shares its slot machine exclusivity with Miami-Dade and Broward counties, Seminole officials believe it has a bright economic future with its monopoly on table games and potential expansion of its seven casinos.

Unlike gambling markets in the Northeast United States plagued by growing competition, Florida is a resort destination surrounded by water, generating roughly 80 million visitors a year.

“With the geographic location we have—being surrounded by water—there’s a great opportunity for both gambling and tourism and hospitality-related investments,” Allen says.