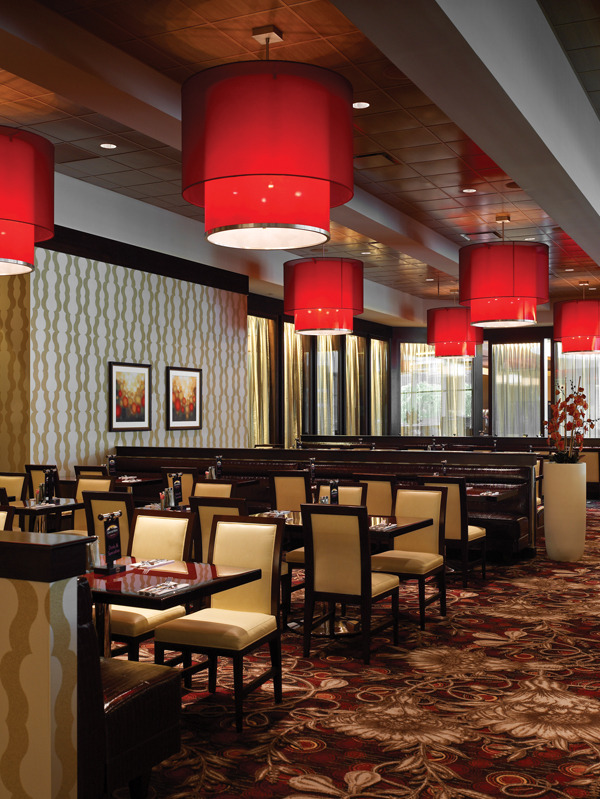 This is one of the greatest casinos not only here, but anywhere in the country.” So declared Pittsburgh Mayor Luke Ravenstahl at the grand opening of the Rivers Casino.

Visually, few would disagree. The Rivers Casino is a beautiful place, whether viewing it as part of Pittsburgh’s North Shore skyline (that’s the north shore of the Ohio River) or touring its casino floor and restaurants.

The design of Rivers, appropriately, reflects the beauty of Pittsburgh’s three rivers, and according to the designers who created it, that was the whole point.

Scott Walls, principal of lead architect Bergman Walls & Associates, says the firm started with a “blank piece of paper” in approaching the design of the building, but the rivers quickly became a theme. During the project’s design phase, it wasn’t even called “Rivers;” it bore original licensee Don Barden’s Majestic Star brand. Without thinking of its name, Walls says he was very cognizant of the local pride in the city’s architecture, and conceived a building that would blend right into the riverside cityscape.

“We took the contour of the rivers, the fluid lines of the water, and incorporated it into the concept of the building,” Walls says. “You’ll see the curves in the facade along the river, which has a flowing motion to its shape, as well as subtle lighting that moves across the facade to simulate the flowing waters.”

Viewing the building from the most popular overlook-across the river and up Mount Washington to a well-known hilltop perch-it looks almost like it’s always been there. “We used no glitter; it is all subtle lighting,” Walls says. “It blends in very well with the Carnegie Science Center (right next door). There are no flashing lights, no blinking lights, no big reader boards. We truly tried to work with the city to protect the view, and we’re proud we were able to pull it off.”

There actually is one unusual visual aspect of the exterior, but it’s actually part of the interior. The sculpture created by sign company YESCO for the iconic “Drum Bar” provides a light display that provides a touch of flash to the laid-back look of the casino’s exterior.

It is the only real touch of Vegas in the design, made for a bar that is one of this property’s truly unique features-a two-and-a-half story drum with a circular bar at the bottom. The drum is a computerized light show formed into a chandelier.

The Drum Bar was created by Las Vegas-based Cleo Design, which created most of the interiors at Rivers. According to Ken Kulas and Ann Fleming, principals of Cleo, the approach to the interiors followed the river-friendly design of the exterior, although it was modified by the preferences of the casino’s president, industry veteran Ed Fasulo.

“The first draw of interior design is to flatter the architecture, which is extremely contemporary,” says Kulas. “Adding direction from the owners, we made it a little more elegant, very warm and inviting, and very comfortable. There’s a hint of tradition in there as well, so the overall effect has a timeless look to it. We chose lots of red and orange and peach tones, and used a great deal of wood, wood veneers and wood finishes-both light and dark woods, so they would contrast each other and give the space a lot of drama.”

The result of this approach is a casino that is bright and cheery as one walks the floor, and a blend of elegance and comfort in the restaurants and lounges. Nowhere is this more evident than in Club 446, the high-roller lounge. “Ed had requested we make it extremely plush, with oversized seating groups, a wonderful fireplace, tremendous views and great amenities,” says Kulas. “The nice thing is that it’s very understated and downplayed, almost like a private club.”

His favorite creation? Levels, says Kulas. It is “quite an electric-looking lounge” in the middle of the casino floor, with seating on several different levels. “It’s almost like a little place to watch the casino-to see and be seen.”

Fleming’s favorite contribution to Rivers is the second-floor corridor that leads to the buffet-it is a microcosm of the overall design, with a balcony to view the ultra-modern Drum Bar on one side and a hard-wood wall on the other, housing a display of local petrified wood. “You can see the beautiful path to the buffet, with beautiful wood on one side; it feels very rich,” says Fleming. “The ‘buffet’ term has always been downgraded, but this facility really upgrades it-it feels like an upscale restaurant… and those gorgeous views!”

It all comes back to the river-and river views define much of the design of this casino, particularly in the restaurants lining the river side of the building. Floss Barber, principal of Philadelphia-based Floss Barber Inc., says her task in designing three of the facility’s restaurants was to make the most of their locations. And two of them-Andrew’s Steak and Seafood Restaurant and the soon-to-open Wheelhouse sports bar-are on the river.

The other, the elegant Italian bistro Ciao, is on the casino floor near the parking garage-the first and last thing most customers see. (Hence the name, which means both “hello” and “goodbye.”) Its main design feature is fantastic Italian marble, along with a unique by-the-glass wine bar.

“We felt all three venues held their own place in relationship to the overall casino floor,” says Barber. “Two of the venues offered a unique opportunity to capitalize on the unbelievable views of the Ohio River and the city skyline of Pittsburgh.”

At Andrew’s, the river dominates. “To accentuate the impact of this spectacular view, a visual screen was designed with the juxtaposition of solid forms with open voids framing the view and providing a tease of what lies beyond,” Barber explains. “Upon entering the venue and the main dining area, customers are wowed by the river view and its close proximity. The materials and color palette integrated into the design are enhanced by the 18-foot-high perimeter glazing system, creating an interior environment where the lines between the indoor and outdoor spaces begin to blur.” (There’s a terrace to take in the views of the city during warm months.)

Barber is designing the Wheelhouse to “feel as though it is carved out of the side of the building, again creating a perceived seamless transition from indoor to outdoor environments,” she says. This bar, inspired by the local passion for sports, will overlook Heinz Field, with great views of both the football stadium and PNC Park, home of the Pittsburgh Pirates.

Bottom line? Rivers Casino lives up to its name.