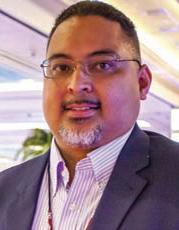 Emmanuel Bezzell brings a unique perspective to the tribal gaming world in that he was born and raised a Muscogee (Creek) Nation (MCN) citizen. Bezzell’s Creek citizenship is a badge that he wears proudly, one that has given him opportunities to work for the tribe and benefit its citizens directly through contributing to its future growth, development and revenue generation.

After acquiring a bachelor of business administration degree from Northeastern State University and a master’s degree in administrative leadership from the University of Oklahoma, Bezzell started his gaming career as a front office supervisor at what is now the Hard Rock Hotel and Casino Tulsa.

Several years later, River Spirit Casino Resort in Tulsa was slated to open in 2009, and he was hired by the MCN Office of Public Gaming as a software compliance agent. Through this position, Bezzell learned a great deal about the regulatory side of gaming, performing software compliance tests and working with several independent labs to broaden his understanding of the gaming world.

In 2012, Bezzell landed the role of manager of higher education at MCN’s tribal headquarters. Working in higher education gave him a unique perspective in that his department provided scholarships for college-bound tribal citizens. Having been a recipient himself of some of these very same services when he was young, he knew the importance of such efforts and how they directly and positively impacted young lives.

This role was his opportunity to give back to the tribe through his work. 2014 marked Bezzell’s return to gaming as director of gaming at River Spirit Casino Resort, and he took his role of personnel management seriously, noticing that millennials had a very different work style from other generations. As a means of keeping his employees motivated, he has developed employee recognition programs for his departments that reward hard workers for their exemplary performances and remind them that they’re appreciated.

Bezzell sits on several committees including the Executive Committee for the MCN Scholarship Foundation Program, and a youth council advisory board for Mvskoke Nation Youth Services (MNYS), a program through which Mvskoke (native language for Muscogee) youth contribute to tribal and non-tribal communities while enhancing skill sets that would carry them into adulthood.

Noticing how consistently low voter turnouts were, the Youth Council engaged young people to participate in voting rallies, which boosted education and drew the attention of even more youth.

Bezzell also is involved in SONS of Mvskoke, a men’s mentorship program dedicated to developing Native American boys into responsible men through structure, spirituality, Native American culture, physical wellness and leadership. With Oklahoma having the fifth-highest divorce rate in the nation, many of its young males grow up fatherless. This is where SONS of Mvskoke steps in; the program teaches young men practical everyday skills, as well as the value of giving services to others. States Bezzell, “I think these programs are important for the development of future leaders within our tribe and community.”

As for guiding today’s up-and-coming young gaming executives, Bezzell advises, “Be humble and patient.” Bezzell learned these principles from one of his most impactful mentors, retired MCN Scholarship Foundation Director Dr. Pete Coser. And when seeking inspiration, Bezzell often turns to his favorite Muhammad Ali quote: “He who is not courageous enough to take risks will accomplish nothing in life.”

Says Bezzell, “Every once in a while, you have to take a risk to get the reward. That has stuck with me.”