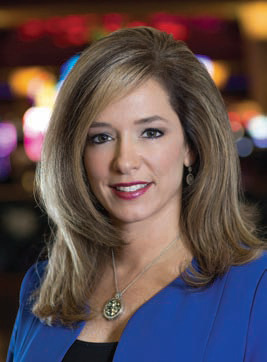 In 1996, when the Mohegan tribe opened its first casino in Uncasville, Connecticut, Kara Fox-LaRose was there. She’ll also be there in October, when the U.S. gaming juggernaut marks its 20th year in business. As one of the longest-serving employees of the trailblazing enterprise, Fox-LaRose is a trailblazer in her own right.

“I’ve been fortunate; my career evolved as Mohegan Sun evolved,” says the tribal member, now assistant general manager of Mohegan Sun at Pocono Downs in Wilkes Barre, Pennsylvania. “In 14 years at the Connecticut property, I saw it go from a locals casino to a world-class destination, with more than 60 shops and restaurants and a gorgeous 10,000-square-foot arena that’s ranked among the best in the world.”

As gaming becomes ubiquitous throughout the Northeastern U.S., the Mohegan Tribal Gaming Authority hopes to work the same kind of magic in the mountains of Pennsylvania. Pocono Downs is in the midst of a multi-year, $1 billion-plus expansion that has already added a hotel and convention center, and may eventually include a retail outlet, water park and sports complex. Fox-LaRose, who oversees all non-gaming operations, is at the center of it all.

“Our visitation is about 60 percent local, and we have expanded our outer market reach to about two hours from the property,” a radius that includes Philadelphia and New York, she says. “Though gaming is the core of our revenue stream, we’re not just a casino. Introducing the new amenities, we expect to see the property really flourish. We’ve been doing very well.”

Like most businesses, the sovereign enterprise faced fierce headwinds during and after the Great Recession. By 2012, the MTGA was $1.6 billion in debt, and revenues at the flagship property had dropped by double digits. The leadership responded with rigorous cost cutting and targeted expansion that have contributed to stronger financials. As MTGA President Bobby Soper commented in late 2015, “We have a lot of positive momentum. Profits are increasing, debt has been declining. We are in a growth mode.”

“We are on two paths, looking both to deleverage and grow our organization, domestically and internationally,” says Fox-LaRose. The MTGA has proposed what would be a history-making alliance with its longstanding competitor, Foxwoods, in Massachusetts. It is pursuing its first venture outside the United States, a proposed $1 billion integrated resort in Incheon, South Korea. And last summer, it established its online presence, Mohegansun.com, through its Resorts Atlantic City property.

For Fox-LaRose, gaming is in the bloodline. She is the daughter of the late Jimmy Fox, onetime director of arena operations at the flagship property in Connecticut and a tribal legend for whom the arena concourse is named. Over more than two decades in the industry, she has worked alongside luminaries like Soper and CEO Mitchell Grossinger Etess. “I’ve been fortunate to be around such supportive individuals—down-to-earth, genuine, transparent people who truly embrace the Mohegan mission and culture, which is to contribute to the viability of the tribe for generations to come.”

Today, as she works to “master-plan the future” in Pennsylvania, Fox-LaRose says, “We have succeeded and overcome a lot of hurdles over the years, and it’s the team that pulls it all together.

“We’ve weathered every storm, including the recession of 2008 and increased competition in the industry, in particular in the Northeast where we reside. We have a strong financial standing, which has allowed us to grow. I’m proud to be part of culture like that. And I’m excited to help lead the team of such a successful, amazing organization.”