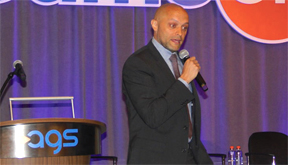 Slot and table-game supplier AGS last month held its second annual GameON Customer Summit, designed to educate select customers on new technologies being developed by the company, the processes and culture of the company, and gaming issues in general. The conference was held at Maryland’s MGM National Harbor, the new resort just outside Washington, D.C.

The intimate conference, attended by 100 of the supplier’s top customers, also is designed to maintain a personal relationship with customers, particularly to get their feedback on what the company is doing right, improvements that may be needed, and what direction the operators would like to see the company’s R&D activities take in the future.

CEO David Lopez served as master of ceremonies, displaying his relaxed style in guiding attendees through informative yet informal sessions covering the company and the trends of the industry. He noted that this year’s attendees, in addition to slot directors from markets across the country, included 12 C-suite level executives and 27 vice presidents, executive vice presidents and senior VPs.

The sessions covered the company’s main three product areas—slot machines, table games and the new interactive division. “In December of 2013, we made a commitment to become a diversified supplier,” Lopez said, noting that the progress to this point includes acquisition of 243 licenses, slot placements that have swelled from 9,000 to 21,000, and the creation of a table-game division from the ground up that now has 1,500 market installs. This year, the company has ramped up an interactive division with social apps and a white-label social platform.

He also spoke of the company’s culture, and the commitment of its executives to remain “accessible, nimble and focused” in their relationship with customers.

Andrew Burke, AGS vice president of slots, spoke of the evolution of the company’s slot product from the time he joined the company in 2006 to the present day, and in particular, the “revolution” the slot division has experienced since the arrival of Lopez as CEO in late 2013 and the company’s acquisition in 2014 by Apollo Global Management.

Burke described how the slot division grew from what was essentially a Class 2 distributed gaming operation focused on Oklahoma to a full-service slot manufacturer, with the acquisitions of Las Vegas-based Colossal Gaming and Atlanta supplier Cadillac Jack. The former provided the supplier’s first mega-hit, the super-sized Colossal Diamonds; and the latter provided a highly regarded R&D team in Atlanta led by Sigmund Lee, who is now the company’s chief technology officer.

The presentation described how the launch of the Icon cabinet and slot platform in 2016 and this year’s launch of the Orion premium cabinet have transformed the company’s slot business. He also described the newest product group on the slot side, a variety of signage packages designed for banks of AGS slots, noting that studies have shown a 15 percent to 30 percent jump in revenues when a sign package is used on a slot bank.

Burke also said the company is responding to customer requests to use the math model of the hit dollar giant-format game Colossal Diamonds in new standard-sized dollar games.

On the table side, John Hemberger, senior vice president of table products, conducted several sessions and panels examining the introduction of side bets and progressives such as the hot AGS product Bonus Spin, which adds a customizable prize wheel to any table game; maximizing profits on low-limit table games; and larger industry issues such as the emergence of electronic table games.

Other highlights of the conference program included a panel discussion by slot executives on “gamblifying the gamer,” which examined ways casinos can capture the business of the large market of video-game enthusiasts; the use of social casino apps, and how to maximize player use of them; the math behind game design; and the use of progressives to raise the hold on table games.

Freeman gave an update on the industry issues being addressed by the AGA, and the evolution of attitudes toward the gaming industry in the U.S. He said the AGA and its members have come together as an industry in recent years, meeting challenges such as the IRS proposal to lower the slot win reporting requirement and the call from the federal Financial Crimes Enforcement Network for the industry to tighten up anti-money laundering procedures. In both instances, he said, the industry came together, “shifting to offense” to work with the federal government to achieve solutions to issues.

He went on to outline the AGA’s leadership in the effort to repeal the 25-year-old federal ban on sports betting, which he predicted will be achieved within the next two to three years.

Allen gave a lively, humorous and nonpartisan assessment of President Donald Trump, covering what the president has done right and what he has done wrong during the first days of his administration.

The conference also was highlighted by special events including an opening-day golf tournament at Renditions, a course that replicates famous golf holes; dinner at Washington’s historic Old Ebbitt Grill; and a moonlight bus tour of the capital’s iconic monuments.