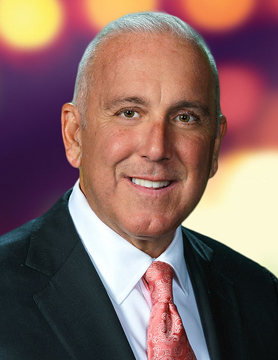 Richard St. Jean is a veteran leader in the gaming industry, working for Caesars, Station Casinos, Penn National Gaming and now as the chief operating officer of the Morongo Casino Resort & Spa. He joined Morongo two years ago just prior to the pandemic and as the casino resort was being renovated. He spoke with GGB Publisher Roger Gros via Zoom from his offices in Morongo, joined by Simon Farmer, the property’s executive director of marketing. (See video below).

GGB: Why don’t we go back to the time when you joined the property—you arrived about halfway through the renovation process, is that right?

Richard St. Jean: Yes, I got here in Q4 of 2019. So, I’d say it was about 50 percent to 60 percent completed. The renovation of the existing casino space was materially under way, but we still had a long way to go.

Did you have any influence in the design and the operations of the process at that time?

In the main casino, I think the program was pretty much baked in. But as we get into the expanded area—65,000 square feet—we had lots of opportunities to really improve the connectivity, sightline, circulation. But as far as the box itself, that remained pretty much the same.

So, you got there right before Covid hit. That must have been a little disappointing for you.

I came out of retirement going on two years to take this job. And I told my wife, “I do not want to open a property. I’ve done enough of those.” I knew I was coming into the renovation and expansion, and I enjoy those projects. But then Covid hit and shut us down. We probably worked harder when we were down trying to formulate the plan for reopening. We opened with about five days’ notice, and we were also first to market at the significant casinos in the L.A. area. So it was like New Year’s every single day, post-opening. We opened with 1,700 team members; we could have had 2,400 or 2,500. But it was all hands on deck; we made it happen. But it certainly wasn’t without a lot of pain.

But even with the shutdown, we were thrilled with our overall performance for 2020. We were relatively flat, even after being closed for two and a half months, compared to 2019. The team really pulled it off. As I tell them: They moved mountains and pulled off miracles. So, it was a pretty strong way to end the year.

Explain how the resort has changed, with the renovations, and new food and beverage outlets, and the larger casino.

We renovated the hotel rooms, the suites, the casinos, the cabanas. So, really the entire property has a new feel and then, in conjunction with that, we started to deploy technology—beautiful TVs, electronic keys and all the other items you take for granted in a modern hotel.

Tell us what happened with the buffet.

I think this is probably one of our favorite stories about the renovations. Our buffet was very dated, and then obviously with the onset of Covid, a lot of these questions about buffets came back. And we had already been in concept discussions with a number of people, on what this could look like going forward. And we looked at numerous iterations, and what it could be, what it should be. We started taking inspirations from places like Faneuil Hall in Boston, Eataly in Chicago, the Ferry Building in San Francisco, and the list goes on. So we partnered with Fabio Viviani to create the Marketplace. It transports you from Cabazon, California to literally any state or city around the country. But then our customers told us, quite succinctly, that they wanted a quality product at a reasonable price, that was fairly quick. And I think the Marketplace hits all those points.

In April, Morongo opened a new poker room and a bingo room, at the tribe’s original casino, now called Casino Morongo. Tell us what those are going to bring to your property.

When that property was opened, as we began construction on the renovation, originally it was with a pure intent of supply and demand for construction disruption. And the place did better than we expected, and we kept it open, particularly with the demand that we had post-opening from Covid.

There had been consideration years ago about putting bingo and poker back there—it frees up space in the main casino where we had a temporary poker room set up. So, we jumped in with both feet, and we came up with a design of the right size program, and it’s really created a full-service property.

The original casino looks like a brand-new facility. So, we are really, really excited about the potential that has. And I think, too, that our tribal members and elders, they love to play there. They grew up there, to a degree.

Morongo has always had some great leadership, and with the recent retirement of the former chairman, Robert Martin, and his successor, Charles Martin. And the tribe was involved in the birth of Indian gaming as a participant in the Cabazon decision that legalized tribal gaming across the country. What does that mean for the tribe?

It’s so humbling, because they’re doing it for all the right reasons. This has been passed on to this current generation, and they really want to perpetuate it, diversify it, so we’re ready for what comes next. The people you see getting involved on tribal council, the members, they definitely have this common core value of how we perpetuate this. For the tribal members, the elders, and even some people on our council to this day that were very instrumental, they take tremendous pride in pulling that off.