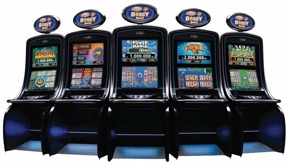 At G2E this month, Luxembourg-based Zitro Games will exhibit a number of machines and games tailored for the North American market, as well as Zitro Revolution 2014, a suite of video bingo products with new functionalities and new community bonus games.

The lineup features a number of new games:

“Treasure Box” is Zitro’s new pirate-themed community bonus game. When Treasure Box is activated, a three-reel video slot game appears automatically on-screen and starts spinning to offer one of three possible winning combinations. Treasure Box provides players with up to three active prize lines that can increase their chances of winning a bonus prize. It also increases the size of the bonus prize.

“Splash.” Zitro calls this its most team-oriented game. When a player achieves the Splash bonus, it is automatically “splashed” to all his or her neighbors, who are then also able to play the community bonus. The bonus offers many and varied winning combinations, which will allow all the participants in Splash to accumulate a number of prizes.

Zitro has also developed a new way to qualify for community bonus games that doesn’t require players to accumulate points.

Using this system, when a cash bonus activates on the game screen, players win direct access to the games. This new admission policy?plus more chances to win?invites player participation in the bonus games, the company says.

Zitro has also developed its own technology for VLTs and server-based games through its Blackwave device. Through this technology, Zitro offers a wide selection of remote-access games for customers, and maximum flexibility for operators. Each casino can customize its own downloads.

And with new tools for monitoring, analyzing and managing the games and data on any machine in any casino, in real time, Zitro offers a suite of solutions it says can help operators optimize the value of their floors.

Through its Interactive Division, Zitro will also present new products designed for the online market via www.worldofbingo.com, one of the most popular social video bingo hubs on Facebook.

The company also will showcase its new 3-D game “Jack & the Beans” and a high-powered game engine with enhanced graphic and sound capabilities, increased interactivity, and engaging three-dimensional characters.

Also at G2E, Zitro will introduce its Extra Ball Feature, included in all the company’s games. As the name makes clear, it provides three new extra balls: a free ball, a wild ball and the Zitro ball. “These new game features promise to increase player excitement by offering more frequent prizes,” according to the company.

Founded in 2007 by the father-and-son team of Alejandro and Johnny Ortiz, the company has penetrated jurisdictions throughout the world. Today its products are in use in South America (Argentina, Colombia, Chile, Andorra, Paraguay, Uruguay and Perú), Central America (Honduras), Southeast Asia (the Philippines), and Europe (Ireland, Italy, Luxembourg and Spain), as well as Mexico, South Africa, and the United States.

Zitro USA General Manager Sam Basile says the company has “the best product, of great quality and perfectly adapted to the North American market. Visitors to our stand will be able to see for themselves the versatility of our games and platforms.”