In the midst of a summer of bad news, the newest casino in Atlantic City is a victim 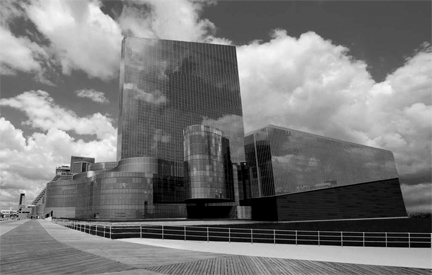 The Revel casino in Atlantic City was not saved by a last-minute buyer, and is scheduled to close September 1, putting 3,100 employees out of work.

The casino had been in a bankruptcy auction, but no qualified bidders emerged, forcing casino officials to announce the shutdown.

“We regret the impact this decision has on our Revel employees who have worked so hard to maximize the potential of the property,” Revel said in a statement. “We thank them for their professionalism and dedication; however, we are faced with several unavoidable circumstances. Despite the effort to improve the financial performance of Revel, it has not proven to be enough to put the property on a stable financial footing.”

Sources tell GGB that Revel’s sky-high energy bill—in excess of $3 million a month, combined with property taxes of a similar amount—doomed the possibility of a sale. The property will now go up for absolute auction, which will negate the energy contract with a company that built a power plant specifically for Revel, and may allow new owners to negotiate with the city for lower property taxes.

Revel officials say they still hope to find a buyer for the 1,399-room hotel through the bankruptcy process, but said a sale would only happen after the shutdown.

When the $2.4 billion casino opened on the Atlantic City Boardwalk in April 2012, it was hoped the megaresort would signal a renaissance for Atlantic City, which has seen its casino revenue decline sharply every year since 2006.

But the Revel never performed up to expectations, and was plagued by a flawed design and faulty marketing plan. The property has consistently ranked among the lowest-performing casinos in Atlantic City.

When it first opened, the casino marketed itself as a luxury resort first and a casino second, but that plan never gained any traction. New owners brought a switch in focus to casino gambling, but it was not enough to turn the property around.

The casino was also hampered form the outset by more than $1.5 billion in debt to construct the facility. At one point, construction stalled until Governor Chris Christie and the state of New Jersey stepped in with more than $260 million in tax abatements to kick-start construction and encourage investment. Since the tax abatements were taxes on future profits, no public money was ever used, since Revel never made a profit.

The casino has twice been in bankruptcy since opening. Revel’s most recent Chapter 11 filing listed assets of $486.9 million and liabilities of $476.1 million.

The casino was originally due to be sold at a bankruptcy court auction. After bids were received, the auction was postponed to allow Revel to review the bids more closely, but in the end Revel’s board met before the new auction date and decided to close the casino.

For Atlantic City, the closing is a serious blow, and one of four likely casino closings in the resort this year. The Atlantic Club casino closed in January and the Trump Plaza and Showboat casinos are also scheduled to close at the end of the summer. Nearly 6,500 total jobs will be lost through the closings.

But as the city reels from the pending closures, officials expressed hopes that the Revel’s building will find a new use.

“This might be Revel’s last chapter, but not the last one for this building,” Atlantic City Mayor Don Guardian said in a statement. “My administration remains committed to the workers, the businesses, and the visitors who are impacted by the news.”

Local officials, however, got some more bad news on casino closings from the state Casino Control Commission involving the pending closing of Trump Plaza and Showboat.

Several area legislators had asked the CCC to force those casinos to stay open for four more months to continue to look for buyers and ease the massive job losses coming at the end of the summer.

But the commission has determined that is beyond its power.

“The commission simply does not have the authority to direct a casino licensee to forestall a business decision to cease its gaming operations,” Matthew Levinson, commission chairman, said in a letter to legislators.

Levinson said the state’s Casino Control Act gives the commission authority to address the orderly shutdown of casino operations, but does not give the commission the right to force a casino owner to keep a gambling hall open or to give employees more advance notice than required by state and federal law.

Trump Plaza is slated to close September 16, and there has been little hope that the casino would find a buyer before that date.

There had been hope, however, that Showboat—scheduled to close August 31—could find a buyer, as interested parties have reportedly been in negotiations for the property with owner Caesars Entertainment.

But the company recently filed a report with federal securities regulators that shows Caesars is still planning to close the casino.

“In June, we announced the difficult decision to close Showboat at the end of August,” the company wrote in the report. “Other participants in the market have followed suit in what we believe to be a painful but constructive development for the market. We are hopeful that rationalization of capacity in Atlantic City combined with concerted effort to attract mid-week traffic and hospitality guests will help stabilize the market.”

Area legislators had objected to that practice as well. Assemblyman Chris Brown says a New Jersey company is interested in buying the Showboat, but that a possible deed restriction imposed by Caesars would prevent the building from being operated as a casino.

Brown says development company Latitude 360 would be brought in by Atlantic Properties Group to build an entertainment complex at the Showboat, but would also include a dramatically smaller casino. He fears that a deed restriction would prevent that from happening.

Trump Entertainment last year had agreed to sell Trump Plaza to California’s Merulo Group, which operates the Grand Sierra in Reno and some properties in Downtown Las Vegas, but Tropicana owner Carl Icahn stopped the sale because he owns the mortgage on Trump Plaza (and Trump Taj Mahal). His approval is required for any sale (or closing).

As Atlantic City faces an unprecedented shutdown of casino properties and loss of casino jobs in the next two months, there’s one thing experts agree on about the resort’s future.

Things are likely to get much worse before they get better.

A new report from the Richard Stockton College of New Jersey—located just a few miles from Atlantic City—warns that Atlantic City’s shrinking economy could lose between 6,328 and 14,258 casino jobs in the next few years.

That translates into between $158 million and $376 million being removed from the local economy, according to possible scenarios examined by Oliver Cooke, an economics professor at the college.

“Atlantic City’s decline is the worst among the 372 metropolitan areas the U.S. Bureau of Labor Statistics provides seasonally adjusted data for,” Cooke said in the report.

Cooke said the closing of casinos ostensibly to “right-size” the city’s casino market will “push the local and regional economy to the brink over the near-term and will have significant adverse multiplier effects on the regional economy.”

Still, many in Atlantic City think the resort is making progress in diversifying its attractions, and note that non-gaming revenue has risen by $160 million in the city in the last two years.

Atlantic City, for example, just hosted two free concerts on its beach, featuring country artists Blake Shelton and Lady Antebellum, respectively. More than 60,000 free tickets—tickets were issued to avoid overcrowding—were issued for each concert, and crowds lined up in the early morning for the two evening shows. Boardwalk business owners said they experienced some of their busiest days this summer, according to local reports.

Cooke’s report also warned that uncertainty in New Jersey on a plan to build two new casinos in the northern part of the state will hurt the investment atmosphere in Atlantic City.

During the summer, a proposal to build a massive casino project adjacent to New York City in Jersey City has emerged, and plans have re-emerged to allow a casino in the Meadowlands Sports Complex.

A bill to allow the casinos has been introduced in the New Jersey legislature, but any expansion of casinos would require approval of voters. It’s unlikely a referendum could go before voters until November 2015.

That would come sooner than an unofficial five-year moratorium on expanding casinos outside of Atlantic City. In 2011, Governor Chris Christie gave the resort five years to try and turn itself around with the help of a new state-administered tourist zone.

Many lawmakers feel the city should get its full five years before any expansion plans are considered, but even Christie has acknowledged that as Atlantic City’s casino revenue continues to decline, the moratorium may no longer make sense.