How casinos are keeping F&B offerings fresh amid rising competition 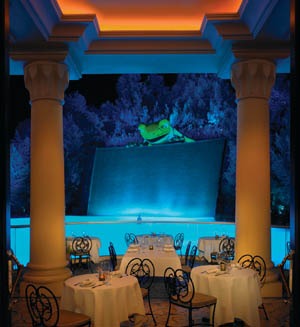 The first casino on the Las Vegas Strip was built in 1941. As its name suggests, El Rancho Vegas effected a Western theme that carried over into all aspects of operation, including food and beverage: hence the Round-Up Room, the Buckaroo Buffet and the Wagon Wheel Tavern.

In the ensuing 60-plus years, trends in casino restaurants have undergone countless incarnations, with grab-and-go joints supplanted by gourmet bistros, heavy-handed themes giving way to cool minimalism, and flash-and-dazzle replaced by understated elegance.

But what’s chic today may soon be passé. Experts say the average casino eatery, no matter how great the food and ambience, has a shelf life of five to 10 years-maybe less. After that, repeat customers (some of whom visit the same property dozens of times a year) just want to try something new.

So what’s the remedy for a tried-and-true establishment that’s lost its appeal?

It’s a multiple-choice question. Some operators go for a cosmetic “freshening” with rudimentary changes in lighting, color palette and menu design (sort of a mini-facelift, instead of the full Joan Rivers). Others choose a total gut-and-remodel, which can range from $200 to a staggering $3,000 per square foot including furniture, fixtures and equipment.

One thing is certain: with the growing emphasis on non-gaming amenities, casinos no longer tolerate “loss leaders.”

“All food and beverage-from the snack bar to fine dining or a restaurant lounge-is what activates the perimeter of the casino,” says architect Scott Walls. “(Restaurants) make sure that life is going on out there, and you’re not just sitting in a big box of slot machines.”

Read on as the experts in their fields sound off about revitalizing casino restaurants.

A “paint-and-paper job” isn’t always enough to extend a venue’s lifespan, says Walls, founding partner of Bergman Walls & Associates. “People come in and think, ‘Hey, it’s the same old place.’ Typically we try to conserve the kitchen, but the rest goes back to the bare bones and we reinvent from there.”

Such a configuration, with small spaces tucked into a larger space, also enables a venue to switch gears-and identities-when the dinner hour is through.

“As the night gets later, some restaurants change over to an ultra-lounge type of venue with semi-secluded alcoves,” says Walls. “They drop the lights to create a different mood, and they get much more use out of the space.” Adding a late-afternoon happy hour as well as a nightlife experience can extend operations by up to seven hours a day.

Another advantage to small spaces-60-seat to 90-seat “jewel boxes” instead of 200-seat dining halls-is that they look busier with fewer patrons.

Senior interior designer Christie Pezzetta of JCJ Architecture says, “Even when we work on a 450-seat buffet, we strive to make the patrons feel as though they have their own space. We purposely sculpt it so every person feels flattered, as though they have a very comfortable front-row seat.”

Ideally, a restaurant will “feed on, add to and trade energy with the casino,” says architect Paul Heretakis of Westar Architecture and Interior Design. “Open, clubby places complement what’s going on at the gaming floor.”

To facilitate that exchange of energy, many lounges and bars are being built with fewer or no walls at the entryway so patrons can literally see and be seen. “You don’t want a closed-in environment,” says Heretakis. “Restaurants and bars are all about people-watching.”

Placement of a venue within the casino is pivotal. Says Albie Colotto, director of design with Friedmutter Group, “You want to retail your restaurant and sell (customers) from the time they walk in-while they’re gambling, when they’re walking to a show. Being located on the casino floor makes you very visible and accessible.”

Locating a restaurant on an upper floor is not the best idea, but it can add a sense of importance to high-end dining establishments.

“We did (Thomas Keller’s) Bouchon on the seventh floor at the Venetian, and it does great,” says Colotto. “But that’s one of the true destination restaurants, so the location creates that exclusivity and a little extra cachet.”

When it comes to design, “most (operators) don’t want gimmicky anymore,” says Heretakis. “Instead of a themed restaurant like a rainforest, they want more sophistication and a certain timelessness.”

Suzanne Couture, senior designer with Friedmutter, agrees. “The days of theming are over. Today we talk about lifestyle and brand, about creating a resort environment that takes you out of your real life but doesn’t take you back to the Old West.”

For the restaurants at Red Rock Casino Resort Spa, a Station property at Red Rock Canyon near Las Vegas, Friedmutter’s design team took its cues from the surrounding mountains and Mojave Desert, using plenty of wood, stone and muted, earthy colors to resurrect the classic “desert-modern” look of the ’50s and ’60s. The Terra Rossa restaurant features Calcutta stone and antique terracotta floor tiles; the T-Bone Chophouse juxtaposes polished rosewood and stacked quartzite for a dramatic look that is wholly indigenous.

“Almost every restaurant at Red Rock is on an exterior wall, so there’s a lot of natural light,” says Colotto. “It’s very comfortable and appealing and blends with the environment.”

But there is still a place for the outrageous kitsch of yore: witness the Cathouse at the Luxor, “inspired,” as its website boasts, “by the rich opulence of a 19th century European bordello,” complete with blue lights and gilt-framed nudes.

Tribal casinos welcome designs that tell stories about their heritage and heroes. At Seneca Allegany in Salamanca, New York, a ubiquitous theme is the story of a brave named Three Arrows who discovered fire and brought it back to his people. That folk tale is reflected in the Lightning Bar, where a chandelier was designed to look like it’s ablaze. Another restaurant was built “like a longhouse, with an abstracted fire pit in the middle,” says JCJ’s Pezzetta. “They loved it.”

“I don’t know if the trend is completely away from brightly lit and cheerful,” says Todd Pagel, also a senior interior designer with JCJ Architecture. “There is some understatement and some very stylish, interpretive and elegant settings as opposed to something more energetic, but the patron base likes both. It’s good to have a diversity.”

“Some people are going retro, some very modern, some are after a very luxe, over-the-top look,” says restaurant consultant Elizabeth Blau, of Blau and Associates. “That keeps it exciting.”

As senior vice president of restaurant development at Mirage Resorts, Blau was credited with importing the first wave of celebrity chefs (Todd English, Jean-George Vongerichten, Michael Mina) and restaurateurs (Le Cirque’s Sirio Maccioni) to Las Vegas in the late 1990s. She believes media outlets like the Food Network have helped create a more educated diner who will gladly forego the steam-table assembly line to dine among the stars-even if it’s pricey, even if they have to wait in long lines.

“When I came to Las Vegas 11 years ago, people were still writing about the $1.99 buffet and all-you-can-eat prime rib,” Blau says. “Without a doubt, the public is more discerning now. There’s 24-hour Food TV, and every major celebrity chef has a national morning syndicated show. My mother-in-law, who lives in the Adirondacks, knows about Daniel Boulud’s DB burger because she saw it on Regis & Kelly.”

If diners willingly pay $275 for a prix-fixe dinner from “Chef of the Century” Joel Robuchon at the Mansion in Las Vegas, it makes sense that icons like Wolfgang Puck, Bobby Flay, Vongerichten, Emeril Lagasse and Georges Perrier will plumb the same marketplace. The presence of these superstars has raised the standard for everyone.

Operators who don’t build and run their own restaurants or contract with celebrity chefs can lease “the box”-usually four walls, structural components and utility hookups, but no finish work-to franchisees, as MGM Grand in Las Vegas did with Robuchon or Caesars Atlantic City did with Morton’s-The Steakhouse.

Mohegan Sun at Pocono Downs in Pennsylvania is doing it with Ruth’s Chris Steak House; the famous chain, with 114 locations around the country, differs from most franchises in that its locations do not adhere to a static look or layout. At Pocono Downs, local contractors, subcontractors and architects drew up the plans, and the restaurant will be owned and operated by local restaurateur John C. Metz. But the Ruth’s Chris name still provides split-second name recognition and built-in loyalty.

While the dining lineup at casinos remains fairly standard-most properties have an Italian restaurant, a steakhouse, a coffee shop, a buffet-casinos are spinning the design elements.

The traditional look of a steakhouse, for example-with dark woods and red leather chairs-is being challenged by venues like Wolfgang Puck’s CUT at the Las Vegas Palazzo. CUT goes for an almost austere modernity and neutral palette that, instead of seeming cold, comes across as modern yet relaxingly uncluttered.

Old Homestead Steakhouse, at Atlantic City’s Borgata, sounds like it should have lassos and longhorns on the walls. Instead, the restaurant-with a flagship that originated in New York more than a century ago-has a streamlined, retro-sleek look with almost no embellishments.

That kind of look exemplifies Blau’s adage that the most effective designers “are not designing for a casino.”

“Restaurants like these have been a major part of repositioning properties,” she says. “What (CEO) Bob Boughner did with Borgata repositioned Atlantic City, and now every casino hotel is working to match that bar? You don’t want to aim for your current market, but for your potential market.”

“In the casino industry, people always want new things-you can’t rest on your laurels,” says Albie Colotto. Of the latest trends, he says, “Every owner says the same thing: ‘We want a lot of people in our restaurant.’ That’s the new trend.”