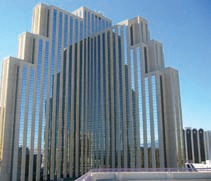 MGM Resorts International will sell two of its Reno properties to Eldorado Resorts for a total of .5 million in cash. Eldorado will assume the 50 percent interest in the Silver Legacy Resort (above) owned by MGM, in addition to the entire Circus Circus Reno. Eldorado owns the other 50 percent of the Silver Legacy.

“The acquisition of these well-established properties represents a significant growth and expansion opportunity for Eldorado, and is consistent with our strategy to enhance shareholder value by structuring transactions that are strategically and economically attractive,” Eldorado CEO Gary Carano said in a statement.

“The acquisition is expected to be accretive to our operating results upon closing, builds the critical mass of our gaming operations and fortifies our position in the increasingly attractive Reno gaming market,” the statement continued.

The acquisition gives Eldorado control of the three largest casino-hotels in downtown Reno, in addition to the Eldorado Resort Casino, opened in 1973. The Silver Legacy opened in 1995 to the tune of $350 million, just a block from Circus Circus Reno, which opened in 1978.

Regulatory approval is still needed to finalize the sale. The transaction is expected to be complete by the end of the year.