Want service while you're in your room? Today's hotel room is not your grandfather's hotel room. 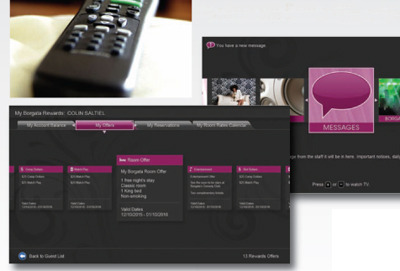 Hit that remote. Place a drink order, finalize dinner plans, request some towels or enter an on-site tournament, right from the comfort of a hotel room. A vital new gaming role for television has come.

Interactive television (ITV) gains an increasingly pivotal role in customer convenience and spending. While most recent gaming innovations surround what’s on the floor—from e-gaming and signage to funds access and mobile apps—the “boob tube” has turned the hotel room itself into a source of revenue.

Television no longer has to simply entertain patrons between gambling stints. It has become the vehicle through which to drive innovative software, and, ultimately, customer spending.

Some of the function is cutting-edge. Station Casinos will likely deliver UFC pay-per-view events through its guest-room televisions in 2016. It will represent exclusivity, as Station Casinos and the UFC share the same owner, the Fertitta family.

How big is interactive television to places like Red Rock and Green Valley Ranch in Las Vegas? Call it Station Identification.

A major beneficiary of this evolution is Allin Interactive, a luxury cruise-line heavyweight which expanded its base and completed a five-year gaming-world run last month. From debuting at Atlantic City’s Borgata in 2011, enhancing the Red Rock and Green Valley Ranch properties in Las Vegas last year and outfitting the spanking new Scarlet Pearl in Mississippi last month, this 20-year-old company owns a lucrative gaming niche. It has parlayed a presence in over 110,000 cruise ship cabins, and on leading brands such as Royal Caribbean Cruise Line, Norwegian Cruise Line, and Carnival Cruise Line, into the casino world. Its DigiHD ITV solution propels gaming interests, according to John Troutwine, senior vice president of business development for Allin. Casinos invest in the television, Allin provides the software.

“The challenge has been to create a return on the ITV system investment for the casino resort operator in an environment where pay-per-view movies are no longer the revenue engine they once were,” Troutwine says.

“Much of our time is spent educating casino resorts on the in-room interactive technology ideas that the cruise industry has developed and evolved over the last few years—that is, using the in-room screen to deliver on-demand, real-time information and bookings, drive yields via targeted marketing, and collect instant, actionable feedback from guests while they are still on site.”

And for the last five years, it has thrived on land.

“The cruise industry leaders, in general, are experts at using interactive technology to maximize the guest experience, and therefore guest yields, by exposing guests to on-site amenities, services, and attractions via the in-room television platform,” Troutwine asserts. “They show the guest, via a 30-second ITV video, the ‘Hot Stone Massage’ spa offering, or the ‘St. Thomas Snorkeling Adventure,’ or the ‘Premium Steakhouse’ dining experience.”

“The key is that the operators have 100 percent control of the content at all times,” Troutwine says. “They can move quickly enough to react to a situation. Let’s say a spa manager realizes he is slow today from 2 p.m. until 7 p.m. That person has numbers to hit, and the manager may feel the numbers are 50 percent below what is targeted, so now he or she can selectively send out a special, allowing a discount for the next few hours. But it can’t go to everybody, and it can only be for a specific time period. This provides that capability.”

Troutwine says operators can obtain the latest functionality at no additional cost with his company’s continually updated support system. Soon to be deployed is a mobile DigiMobile aimed at smartphones and tablets.

Allin’s land journey began in Atlantic City in 2011. Borgata, the resort’s most profitable casino, was in the midst of a $50 million project and sought an amenity to fit its identity.

The sophisticated revenue triggers that unfolded in subsequent years were not part of this original plan. For Borgata, ITV meant meeting lofty consumer expectations. Period.

This is a hotel with two spas, five indoor/outdoor pools, two fitness centers and five boutique shopping experiences. It displays signature restaurants linked with world-class chefs Bobby Flay, Wolfgang Puck, Stephen Kalt and Michael Schulson. Positioned away from downtown, there are no concerns of customers walking somewhere else, but no foot traffic either.

For this property, which dwarfs its Atlantic City competitors, image is critical.

“In our case, it has been more about customer amenities, and all of our expectations have been realized,” says John Forelli, vice president of information technology for Borgata and the executive who awarded Allin its first gaming credential. “The values we have with the access to MyBorgata Rewards, custom messaging and in-room dining options is tightly coupled with the room rate a customer is paying. The all-in experience is woven into the pillows, the decor, the cleanliness of the room, the size of the TV and the excellent high-def channel quality. We feel this is a convenience they should have at our property.”

Forelli considers Allin one of his favorite vendor stories. It was a flip of the usual sales-and-operator give-and-take process, he says. Rather than peruse a proposal, Forelli contacted engineers at Enseo, the company which made the televisions used on his property.

“They take pride in what they make, and they are not the sales people, so they are going to tell you the truth,” he laughs. “I asked them out of all the vendors who use their product, which one maximized the capability of it best. They gave me two names; one was Allin. So I reached out to them and said we were interested and asked if they would they give us a demonstration. Within 48 hours, they were here, showing us how well this could work.”

Because it remains on Allin’s support program, Borgata has the flexibility to utilize more of the system’s marketing functions in the future if it so chooses.

Allin’s software was placed inside Red Rock and Green Valley Ranch in conjunction with Cox Business/Hospitality Network last year. Interactive television exceeds the job of image maintenance here. It has been called upon to drive revenue on several levels. The next step will occur via mixed martial arts, a unique dynamic for this property. Wine and cheese? Meet Ground and Pound, all from the comfort of your hotel room.

Lorenzo Fertitta owns the UFC and is listed as the co-owner of Station Casinos along with Frank Fertitta III. This inspires a logical hookup. UFC pay-per-view events will likely be available to Station customers in a few months.

Operators normally don’t want customers distracted by an event that usually costs less than $100 and runs three to four hours. But the UFC-Station partnership could produce new revenue streams. Customers who double as mixed martial arts fans can be lured back to many Station properties for other gaming trips.

“The UFC business model is perfect for this idea,” says Aiden Kemp, director of engineering for Fertitta Entertainment and a major player in the deal that brought Allin Interactive to the Station properties. “Eighty percent of pay-per-view buys are made in the 24 hours prior to the event, which lends itself incredibly well to the hotel market. If you are a guest, you don’t have to order the UFC event weeks in advance; we can literally offer it on the day of the show. Offering pay-per-view attractions through a resort is not widely done, but this makes sense in light of the speed and the growth of the UFC.”

Pay-per view will become the latest utilization of integrated television, Kemp indicates. It has climbed several rungs of the service ladder, a “zero to hero” approach which included first obtaining high definition, then getting information to guests. The process will ultimately include contacting them directly on-screen and having direct integration for in-room dining and requests for items like towels, along with special events.

“Because of all the new features always being added, we can always go one step further,” Kemp says.

In the end, the in-room TV is no longer a distraction the hotel-casino hopes you ignore. It’s now a moneymaker.